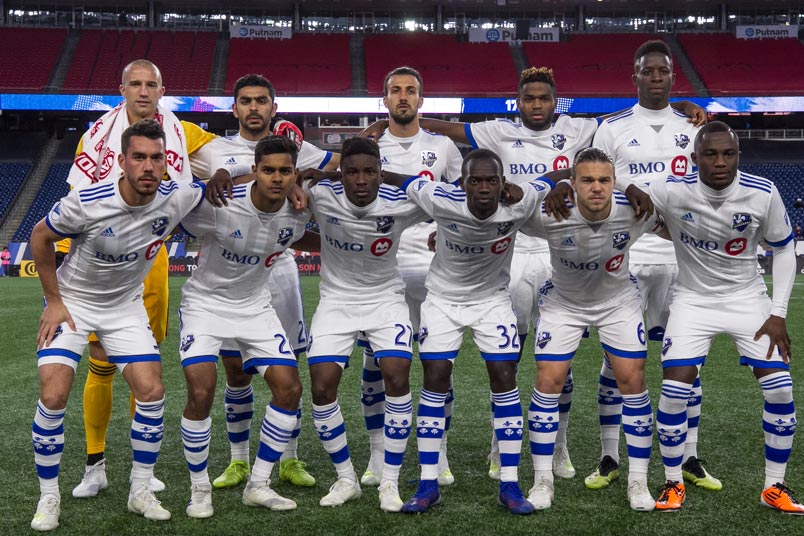 By Jason Davis – WASHINGTON, DC (Apr 26, 2019) US Soccer Players – The Montreal Impact defeated the New England Revolution 3-0 on Wednesday night, with two of the goals coming from homegrown player Anthony Jackson-Hamel. The win was Montreal’s fourth of the year and vaulted the Impact into 2nd-place in the Eastern Conference of Major League Soccer.

As these things go, that result is not, by itself, all that remarkable. While the Impact is no one’s idea of the best MLS has to offer, the chaotic early going in the East means that no result can be all that surprising. The Revolution’s poor start, masked by last weekend’s narrow victory over a struggling Red Bulls team, would normally make them fair game for a visiting team like Montreal.

Yet the result was remarkable, and not because of the relative form of the two teams. Montreal winning appeared to be among the least likely scenarios because a disastrous travel experience forced the club to arrive in Foxborough just hours ahead of the game. The Revolution had a massive advantage but was unable to make it count.

Despite the result, Montreal players were not happy about the ordeal. The decision to move forward with the game again brought to the forefront an issue MLS has yet to grapple with, more than 20 years into its existence: Restrictions on charter flights.

“Honestly it’s a joke,” said Montreal goalkeeper Evan Bush, the club’s MLS Players Association representative. “You can talk to anybody from the administration to the players and the coaches, the way that the last 24 hours happened should never have happened. The powers that be know how we feel about it.”

Bush pointed out that the trip wasn’t just about a little delay and the annoyance it caused. The highly tuned nature of professional soccer players and the effort needed to play a high-level match put them at risk with such a short lead-in.

“It became a player safety issue. It’s not just a matter of inconvenience for us,” Bush explained. “We’re lucky that we didn’t have guys get injured today because of the way their bodies were treated the last 24 hours.”

From the beginning of MLS, the bar on charters flights was meant to accomplish two things: Keep the travel budget for the spending-shy league down and keep the playing field level across the competition. Parity applies to all operations, including how teams get to games on the road.

Rather than let owners decided if and when they wanted to spring for the comfort and convenience of charter flights, thereby providing an advantage to the richer, more spend-happy clubs, MLS dictated that teams are only allowed four charter flight legs per season for league play. That long-standing policy has occasionally faced scrutiny, but never enough to force a change.

The Impact ended up on a charter Wednesday when a commercial option proved unavailable. They took another to return to Quebec. According to Sam Stejskal at The Athletic, neither will count against Montreal’s four-leg allocation for 2019. That seems only fair, considering the trouble the club had to go through when the league decided against rescheduling the game.

It’s not clear why MLS allowed the game to go on with a team barely able to physically prepare for 90 minutes on an artificial surface. The league has a long history of prioritizing game dates and gates over the quality of the competition. This could be just another example of that misguided approach.

“The people that can make the decisions didn’t want to change anything. I won’t point fingers necessarily, but something needs to be done,” Bush said. “The Players Association is aware of it. I understand that there are certain things that they can’t do. But when it comes to player safety, when it comes to the assets of the league – and the players are the assets of the league – they need to do better.”

There’s a simple economic equation for MLS. Charter flights would be a significant expense. This league doesn’t consider that expense as part of doing business even when it affects the quality of its product. As MLS salaries continue to rise, the investment in players demands better treatment in all areas. Protecting the players is a business decision that shouldn’t be difficult to make.

Though it’s difficult to know for certain and at what level, players lose minutes every season because of injuries caused or exacerbated by commercial travel. Recovery time is the most obvious area affected by it. Teams forced to make trips with multiple flights or delayed by the vagaries of air travel don’t return home as quickly as possible and miss crucial time returning to full fitness.

The MLS Players Association tweeted a statement that the organization was “closely following” the situation. Declaring the matter an issue of “safety and performance”, the MLSPA suggested travel should be a higher priority for everyone involved.

The league’s position is also maddening from a matter of perception. The “league of choice” directive rings hollow when players are stuck on tarmacs, spend whole days traveling, and in some cases, asked to perform at a high-level hours after arriving for a game.

Stories like the Impact’s shines a light on the disconnect between what MLS aspires to and what is. In the global sports market that celebrates athletes and pays them handsomely, MLS comes off as a minor league outfit in moments like these. The timing of the Montreal saga is extra poignant, coming just days after an announcement by the league that it will expand to 30 teams and is raising the expansion fee to $200 million.

It’s not a good look for a league as nominally ambitious as MLS to declare itself strong enough to ask for such a massive investment by incoming ownership groups while refusing to allow something as basic to North American pro sports as chartering planes.

MLS had a chance to do right by the Impact players and its own competition by canceling Wednesday’s game. It chose to go ahead. The Impact victory does not wash away the mistake.

MLS still has a chance to do right by all of its players and its own competition by allowing teams to charter flights whenever necessary with no restrictions. Whatever advantages such a chance would provide to a few teams are not large enough to allow the current situation to stand. If the league cares about its on-field product, that justifies the cost.