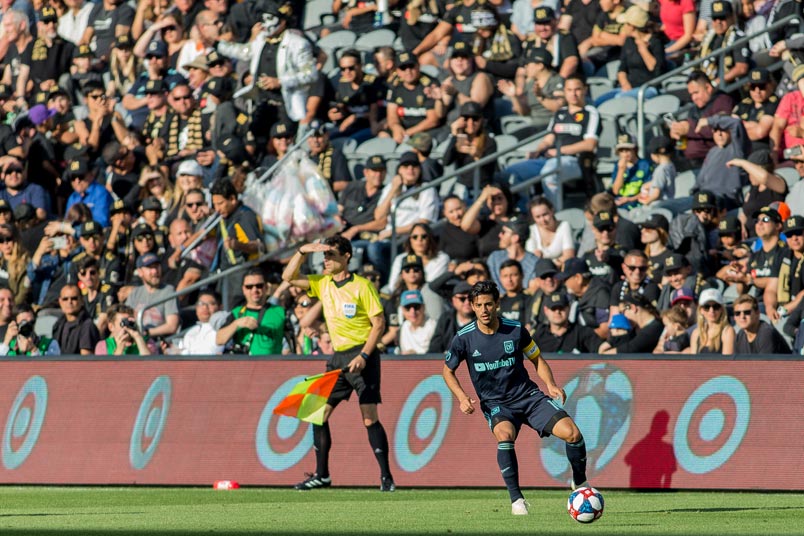 By Clemente Lisi – NEW YORK, NY (Apr 29, 2019) US Soccer Players – MLS is once again off to an intriguing start. This is the point in the schedule when some of those preseason predictions are starting to look silly. It’s also a great time for teams up and down the conference tables to take stock before heading into the busy summer stretch.

Unlike Europe’s often-predictable title races, MLS is different. The league’s unpredictable nature, coupled with the playoffs to determine a champion, make any attempt to making predictions practically impossible. There are six months left in the regular season. A lot can happen between now and then. There are many storylines that have yet to evolve. As they say, only time will tell. Stay tuned. The MLS season is really just getting started.

There are some early trends already worth tracking and concrete storylines starting to emerge. LAFC, for example, has become the cream of the crop. Perennial contenders like the New York Red Bulls have largely been a shambles.

Off the field, the situation has been bizarre. Although the league-wide attendance average has remained largely the same year-over-year compared to 2018, some venues have looked emptier than most. Markets like Seattle, Atlanta, and newcomers Cincinnati continue to draw, while the New York Red Bulls and NYCFC have played before largely sparse crowds despite announced attendance numbers that were higher. Poor records and bad weather have certainly played a role there.

With a quarter of the season in the books, here are the five biggest talking points to emerge in 2019.

Watch out for Los Angeles (and not New York)

LAFC and the LA Galaxy are the two best teams in the league. The New York Red Bulls are among the worst. NYCFC was also on that list until recently but have put together a decent April to climb the table. In general, the league’s largest market, in terms of the metropolitan area, has been unable to deliver for both New York fan bases and MLS. How do you solve a problem like New York? When it comes to either team, that remains the key question.

The Galaxy did deliver a string of titles earlier this decade, while LAFC is only in its second year of existence. What coach Bob Bradley has been able to do with this team, in terms of competitiveness and player acquisitions, is special. We won’t get an LA derby until July 19. A lot can happen between now and then. The hope is that these two teams can remain in the Supporters’ Shield chase long enough to add that special something to this already-budding rivalry.

You can’t speak of LAFC without talking about Carlos Vela. The Mexican international has certainly found his groove in this league and his performances this season are proof of it. In just nine games, Vela has scored 10 goals and two assists to put him atop the scoring charts, prompting Deadspin.com to declare recently that “MLS has turned Carlos Vela into Lionel Messi.” It was a backhanded compliment to say the least, but nonetheless a compliment to both the league and the player.

Not to be outdone in the race for MVP, Zlatan Ibrahimovic of the Galaxy is a close second with seven goals. At 37, he’s playing like the Zlatan of old, not demonstrating his age at all. The rigors of MLS can be tough on a player’s body. Ibrahimovic may soon learn he can’t maintain this form. At the same time, never underestimate his ability to carry a team.

Others potentially up for the honor: LAFC striker Diego Rossi, who has scored six goals so far this season. Rossi’s ball control and maturity have also been a marvel to watch. Another player worth watching is playmaker Alejandro Pozuelo who has teamed up well with Jozy Altidore at Toronto FC. These last two players may be the dark horses in this early race, but don’t underestimate them.

How the West is won

The Western Conference is stacked with talented teams. A look at the Supporters’ Shield race shows that five teams from the West hold the top seven spots in the standings. The only exceptions to the West’s domination have been DC United and Toronto FC.

While it’s true LAFC and the Galaxy have risen to the top, Seattle and FC Dallas seem to have returned to the form of just a few years ago when they were regularly dominating the conference. This should all make for a very interesting slog near the end of the season when teams are jockeying for playoff position.

How is the West won? Home-field advantage has certainly played an outsized role. With the win two weeks ago, LAFC set two records: a club-best 11-game home undefeated streak and a five-game home winning streak. Seattle, known for midseason turnarounds and strong home support, was 4-0-1 home record after this weekend’s 1-1 rematch with LAFC. The biggest game-changer over the long haul? Seattle have an open DP spot. Should they fill it this summer, look for another Seattle surge to offer a real counterweight to LAFC.

Last year, it was Toronto FC who failed to make the playoffs after winning MLS Cup in 2017. This season, 2018 champion Atlanta United is on course to repeat that disastrous feat. After falling behind early due to splitting focus with the Concacaf Champions League, the Reds couldn’t catch up in MLS. They finished with a 10-6-18 record and outside the playoffs. Toronto, in turn, has learned from the 2018 season and is now flying high again.

Atlanta is following a similar route. Dumped early from the CCL, the team has only been able to go 1-2-3 through six games. That’s good enough for the Eastern Conference cellar. There is time for Atlanta to recover and go on a winning streak, but the next few weeks could prove crucial. The team has the players to turn this around.

There are plenty of teams in the Eastern Conference to brag about. DC United certainly comes to mind, as does Toronto. But the Chicago Fire? It’s true the Fire is currently 8th in the East. After a slow start, Chicago had put together a four-game undefeated streak entering week 9, but a pair of 1-0 defeats to NYCFC and Montreal Impact last week certainly didn’t help.

This could be the season Chicago make the postseason, marking only the third time since 2010. Nemanja Nikolic remains an offensive threat, but there are still some major problems for the Fire. The defense is often unable to stop hemorrhaging goals and rarely push up the wings. Having said that, Chicago, like other teams, has the time to turn things around. Anything can happen between now and the end of the regular season in October.