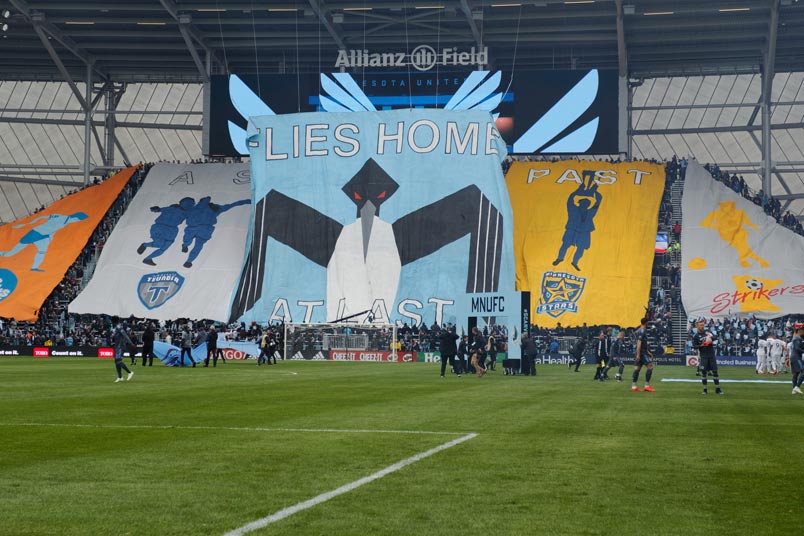 The week 7 roundup starts in Saint Paul on Saturday where Minnesota United opened Allianz Field by drawing 3-3 with NYCFC. Osvaldo Alonso scored the first goal at the newest stadium in MLS, putting United up in the 13th minute. NYCFC answered back when Valentin Castellanos scored in the 16th. Ismael Tajouri put New York up two minutes later. Angelo Rodriguez equalized in the 20th with Minnesota taking the lead through an own-goal in the 32nd. Tajouri equalized in the 64th.

Week 7 opened on Friday in Chicago where the Fire and Vancouver drew 1-1. Gordy Reyna scored for the Whitecaps in the 53rd minute with Netanyahu Nikolai’s converting a penalty in the 84th.

Montreal shutout Columbus 1-0 at home. Harry Novello scored the game’s only goal in the 55th minute with Evan Bush making 5 saves to keep the clean sheet.

Houston beat San Jose 2-1 at BBVA Compass Stadium in a game that saw a lengthy lightning delay. Alberth Elis scored for Houston in the 52nd with Jackson Yueill equalizing in the 56th Tomas Martinez scored the Dynamo’s winner in the 60th. San Jose finished a man down with a red card to Marcos Lopez in the 87th minute.

This was an even game, one where they man-marked everyone and that made us uncomfortable at first,” Martinez said. “I think we had the best scoring opportunities and we just didn’t finish them, but I think the team is doing well. The team is firm and very mature, our approach doesn’t change – when they scored the equalizer or when we don’t play well – we show our maturity and respond, which is very good for the team. It was very important to win today and we are at a top level – now we have to focus on a very important game on Friday against the Los Angeles Galaxy.”

Seattle beat Toronto 3-2 at CenturyLink Field. Jozy Altidore scores for Toronto in the 11th with Will Bruin equalizing in the 24th. Bruin put the Sounders up in the 66th. Cristian Roldan scored in the 68th to make it 3-1 Sounders. Altidore pulled a goal back in the 70th.

Atlanta United shutout New England 2-0 on the road. Ezequiel Barco scored in the 29th and 49th minutes. Brad Guzan made 1 save to keep the clean sheet.

“I think the players knew the first half hour didn’t go well and we found ourselves down a goal,” Revs coach Brad Friedel said. “I think if the goal stood, then it’s different. Just like the Columbus game here, if the penalty goes in, it’s different. We need that break when we get our chances and we didn’t get it tonight.”

FC Dallas bear Portland 2-1 at home. Jesus Ferreira had Dallas up in the 9th minute with Reto Ziegler doubling the lead from the penalty spot in the 60th. Cristhian Paredes scored for Portland in the 67th minute.

“The only thing I appreciate from tonight is the spirit and effort that I saw from our team,” Timbers coach Giovanni Savarese said. “I reserve any additional comment on other obvious factors out of our control that affected the game.”

DC United bear Colorado 3-2 at Dick’s Sporting Goods Park. Benny Feilhaber put the Rapids up in the 11th minute with Luciano Acosta equalizing in the 35th. Chris Durkin made it 2-1 DC in the 38th with Lucas Rodriguez scoring United’s third goal in the 43rd. Kei Kamara pulled a goal back for the Rapids in the 66th.

“To sort of summarize the game, I’m disappointed, incredibly disappointed with the outcome of the game,” Colorado coach Anthony Hudson said. “We started the game very well. I said on the bench, we probably scored a little bit too early, but we were bright, we started well, we had a spell of twelve to fifteen minutes where we didn’t defend well enough and psychologically almost just collapsed defensively. The response in the second half was good, I think we should have gotten more from the game in terms of the amount of chances we created and had in the second half. I was pleased with the response, but very, very disappointed with how we defended in the first-half.”

Real Salt Lake beat Orlando 2-1 at home. Sam Johnson put RSL up in the 17th with Damir Kreilach doubling the lead in the 55th Nani scored for Orlando in the 81st minute.

“Obviously highly frustrated,” Orlando coach James O’Connor said. “I think when you look at the game I think again that we gifted the opposition two goals and that made it very difficult for us to get back into it. I thought we had some longer passages, plenty of possession, plenty of shots. You can’t just keep giving the opposition two goals and then expect to win the game.”

The Galaxy shutout Philadelphia 2-0 at home. Zlatan Ibrahimovic scored in the 27th and converted a 36th minute penalty. Philadelphia finished a man down with a red card to Auston Trusty in the 76th minute. David Bingham kept the clean sheet for LA with two saves.

Week 7 ended in Kansas City with Sporting and the Red Bulls drawing 2-2. Johnny Russell put Sporting up in the 24th. Daniel Royer equalized for the Red Bulls in the 52nd with Brian White scoring in the 75th. Gianluca Busio equalized in the 88th. New York’s Kaku saw red in second-half stoppage time.

“We played very well in the first-half,” Sporting KC coach Peter Vermes said. “We created a lot of chances. We needed to score more than one goal. Those chances came back to bite us a little bit. It’s unfortunate because I think over the course of the game, we were the better team.”