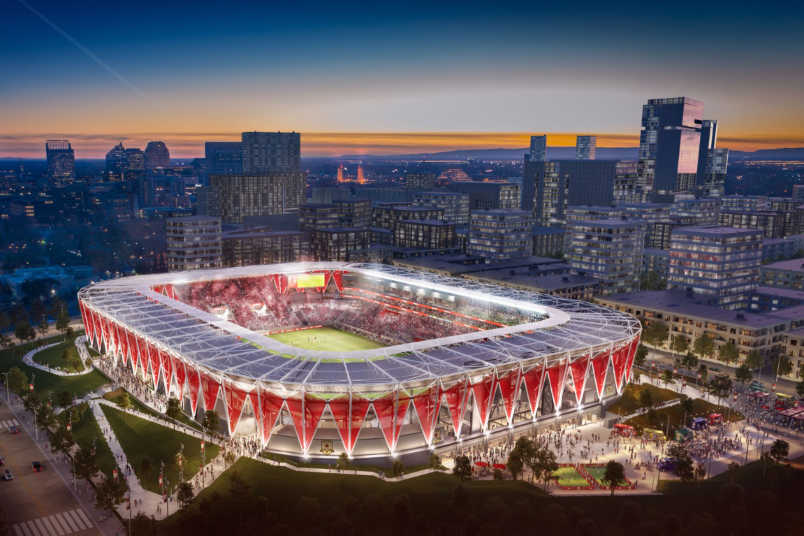 The soccer news starts with MLS expansion. The league’s push to 28 teams continues with Sacramento releasing an updated stadium rendering. As always with MLS, it’s the stadiums that end up being the issue. Getting a team in a new building in time for their expansion season isn’t the norm. Instead, it’s a waiting game that in some situations can continue for years.

Sacramento needs an expansion slot first. The league has considered the market while opting elsewhere in the previous expansion cycle. If MLS really does stop at 28 teams, Sacramento and other cities are competing for the final four spots. That’s not a new scenario for Sacramento when they were competing for the final spots in a 24-team league. It’s an open question when or if MLS really does settle on an end number for the size of the league.

“The new renderings demonstrate our continued forward progress on our MLS bid and how much work is taking place behind the scenes,” Sacramento Republic president Ben Gumpert said in a press statement. “The additions to the existing stadium design provide an even better fan experience, including 360-degree circulation and lookout points from our stadium to our river and our downtown skyline. This has always been about building something that showcases the best of Sacramento and that remains core to our design.”

Also in the soccer news, Tim Ream’s Fulham lost 4-1 at Watford relegating them to the Championship. Trailing from the 23rd minute, Ryan Babel equalized for Fulham in the 33rd. Watford scored in the 63rd, 69th, and 75th minutes.

“Our results over the past three months were as troubling for me and everyone associated with our club as I know they were for you,” Fulham chairman Shahid Khan said. “Last night’s outcome made official what we didn’t think would be possible in August and tried desperately to remedy and avoid as the season wore on. For me, that makes today the most difficult day of all. I am sorry that we let you down.”

Mix Diskerud scored in Ulsan Hyundai’s 2-1 K-League win over FC Seoul, opening the scoring in the 14th minute. Junior Negrao doubled the lead in the 73rd with Seoul pulling a goal back in stoppage time. Diskerud subbed out in the 70th minute. In the Israeli Cup, Jonathan Bornstein’s Maccabi Netanya shutout Hapoel Hadera 1-0 at home. Tyler Adams wasn’t involved in RB Leipzig’s 2-1 win at Augsburg in the DFB Pokal quarterfinals. Timo Werner put Leipzig up in the 74th with Augsburg equalizing four minutes into stoppage time. Marcel Halstenberg converted a penalty in the 120th minute.

Rendering courtesy of the Sacramento Republic