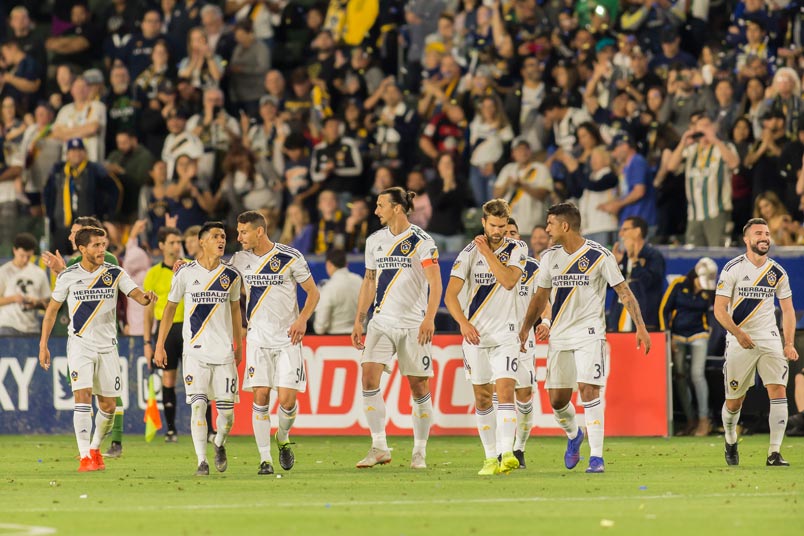 By Luis Bueno – RIVERSIDE, CA (Apr 17, 2019) US Soccer Players - For two-plus seasons, the LA Galaxy has failed on all fronts. No playoffs. No runs at championships. No presence in the Southern California sports landscape.

After its third makeover in as many offseasons, there seemed to be more questions than answers, the main question being, how long will it take the Galaxy to get back to its former glory? It seems that the answer to that may have been six-plus games.

The LA Galaxy is already a much better team now than it has been at any point in the last two seasons. The Galaxy sits in 3rd-place in the Western Conference table through six games, with five wins and one loss to show for its 2019 campaign to date. The club has already dealt with injuries to key players on top of having to deal with the positive but still disruptive additions in the front office (Dennis te Kloese) and coaching (Guillermo Barros Schelotto).

Where there is true progress, the area that will ultimately determine whether the Galaxy can indeed come all the way back or remain mired mediocrity or worse, is on the brink of responding in a thunderous manner.

Defensively, the Galaxy appears to be back. It is the defense that will determine this team’s success. If that is the case, Galaxy supporters can rest easy and know that their beloved title-chasing, swashbuckling Galaxy side has all but returned.

The Galaxy’s defense is shaping up to be one of the league’s best. After two years of being one of Major League Soccer’s worst backlines, that is a surprising but necessary turnaround. Scoring goals has not necessarily been a problem for the club, but giving up goals has been something the club has seen way too much of recently.

Entering this season, it appeared goals would again not be a problem barring injury, of course. The Galaxy had Zlatan Ibrahimovic around. In his first season in MLS, Ibrahimovic scored 22 goals in 27 games. Romain Alessandrini had also contributed goals, scoring 24 goals and adding 21 assists in his first two seasons in the league.

The club got rid of Giovani Dos Santos, which was addition by subtraction for the club. Losing Ola Kamara on the eve of the season was not encouraging, but the Galaxy’s attack is none the worse for the wear because of it, at least up until now. The Galaxy has 11 goals this season. Outside of the 2-0 loss at FC Dallas on March 9, they've scored at least two goals per game.

Unsurprisingly, Ibrahimovic leads the team in goals with six. However, the Galaxy scored three goals in a win over Minnesota on March 15 without either Ibrahimovic or Alessandrini in the lineup.

Defensively though there were concerns. And through the season’s first four games, those concerns were valid. The club allowed six goals through those four games, including four in three home games without collecting a clean sheet.

As the club entered April, though, the defense began to take shape. The Galaxy pitched a shutout for the first time this season, winning at BC Place by 2-0 on April 5. Admittedly, Vancouver helped as forward Ali Adnan had a horrendous penalty kick attempt in the second minute of the game. Had he not tried a panenka, perhaps he would have hit the back of the net.

The Galaxy is on the receiving end of good fortune now. The club moved on from that save and closed the door on the hosts. The next victim was Philadelphia, who also fell by 2-0 to the Galaxy. The streak matches last season’s high of two consecutive shutouts, which the team accomplished on two separate occasions.

Part of what has helped the Galaxy has been consistency across the backline. In Daniel Steres, Jorgen Skvelvik, and Rolf Feltscher, the Galaxy features three defenders who have played in more than 500 minutes already. A fourth, Diego Polenta, adds another 450 minutes played across five starts.

The Galaxy also beefed up its defense with the addition of Costa Rican international Giancarlo Gonzalez. Injuries have limited stalwart defensive midfielder Juninho to one minute of action. Juninho starting alongside Jonathan Dos Santos in the Galaxy’s central midfield will make for a tough pairing.

If the Galaxy defense can get into the third minute of its next game versus Houston at home on Friday without giving up a goal, then their scoreless streak will reach 229 minutes. That's one minute longer than the longest streak the club had in 2018 and the longest since the last three games of the 2016 season. Fittingly, the Galaxy closed out Bruce Arena’s last regular season with a 231-minute scoreless streak. The defensive highlight of that season though as when the club allowed just one goal in a seven-game stretch in spring of 2016.

The Galaxy allowed 67 goals in 2017, only avoiding being the league’s worst defense because of expansion side Minnesota’s futility on its backline. The Galaxy did not have consecutive shutouts that season. The Galaxy improved a year ago, but just by three goals as the club allowed 64 goals, or two per game. It is difficult to make the playoffs when allowing that many goals. Allowing 131 goals across two seasons has provided great moments for opponents but no playoff appearances or a hint of a run at a title for the Galaxy.

It was always going to be about defense for this team. A defensive turnaround was necessary for the Galaxy to be contenders once more. Allowing six goals in six games is a solid showing. One goal a game will lead to many positive things for the club, particularly with the potency the club has up top. The season is still young and the defense could still fall apart. If the early trends continue then that will not be a concern.