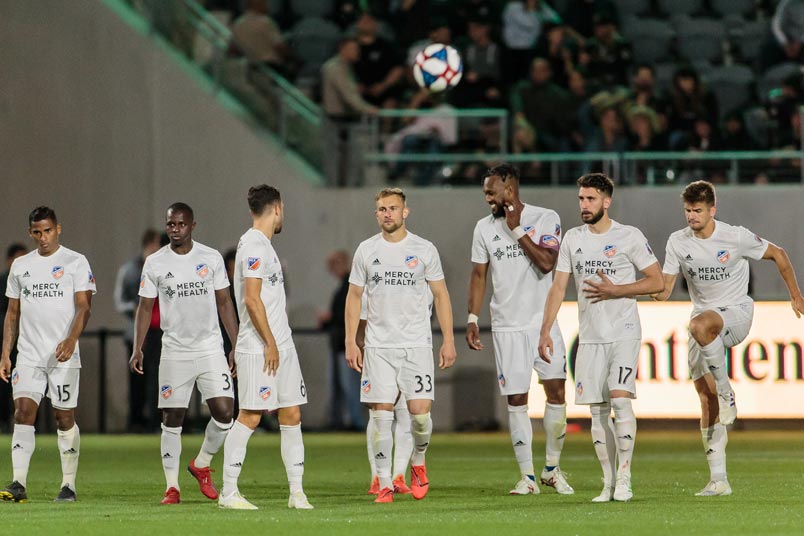 By Jason Davis – WASHINGTON, DC (May 15, 2019) US Soccer Players – The MLS calendar year is just one 12-month season of change. A rash of coaching changes in the early going of the 2019 campaign means more than usual to talk about when it comes to new faces and reorganization. New England has handed the reigns of their program to Bruce Arena. Colorado installed Conor Casey as an interim manager and has gone silent for the moment.

Silent does not describe FC Cincinnati. The league’s lone expansion team in 2019 is in the midst of a metamorphosis. Firing head coach Alan Koch was just the first part of what appears to be a drastic overhaul of the soccer decision-makers in the Queen City.

For now, a former assistant under Koch named Yoann Damet is in charge of the on-field project. Damet is a fascinating story. He’s 29 years old, didn’t play soccer past the youth levels, and he’s unlikely to be the permanent choice for FCC. There’s pressure on the club to find a coach who can move them to the next level and experience figures to be a major factor in the hire.

First things first, however. Per reports following Koch’s dismissal, FC Cincinnati plans to hire a general manager before naming the next permanent head coach. That role has belonged to team president Jeff Berding since the club’s USL days. It was Berding’s name on the MLS transactions that formed the roster ahead of the expansion season, a roster that’s deficiencies played a role in Koch’s failure.

Dividing the labor and allowing Berding to focus on the business of FC Cincinnati is a smart move for the young club. FCC needs a dedicated GM, ready and able to navigate the byzantine world of MLS budget rules while formulating a long-term plan for success on the field. The general manager won’t be the technical director. That job belongs to Luke Sassano, who the new GM will oversee but will have a major say in the identity of the team moving forward.

That’s where FC Cincinnati might have misstepped coming into Major League Soccer. There’s more to these roles than just titles. In an accelerated run-up, a GM focused on the technical side might have made enough of a difference.

It’s not ideal to be looking for a chief decision-maker in May, just as it’s not ideal to be on the hunt for a permanent head coach with the campaign already underway. FC Cincinnati is now scrambling to coalesce an MLS-class operation on the fly.

So who should FC Cincinnati target for the job? Berding will still sit at the top of the power structure at the club. If he’s pivoting to the full-time role of overseeing the stadium construction and eventual move into the venue, the man in charge of the soccer side of the organization needs to be an authoritative figure with clear ideas and the ability to execute them.

Reports out of Cincinnati say the search for a GM has been going on “for months”. Whether that means the club has interviewed candidates or is simply whittling down a list ahead of meetings is unclear. Whether they’re narrowing down the possibilities or conducting an open search is an interesting question. The list of ready made MLS general managers not already on the job else is small. That doesn’t there aren’t some up-and-coming types in the MLS pool somewhere, just that tapping one means turning to a person with no experience.

Cincinnati could look abroad for an executive to lead the soccer operations, similar to what the Union (Ernst Tanner) and Galaxy (Dennis te Kloese) both did recently. That requires having an MLS budget adept figure on the staff, the better to help the new GM handle the roster rules.

The hire will be the first real sign of the club’s ambition as it moves quickly into a 2.0 version of itself. It will send an important message to the fans in southern Ohio. There’s no sense in taking a group that has shown up in massive numbers since the club’s USL launch in 2016 for granted.

Up the road from Cincinnati, the Columbus Crew made a move of their own on Tuesday. The Crew signed striker Gyasi Zardes to a contract extension, converting him into a Designated Player in the process.

While the DP tag doesn’t carry the cache it once did thanks to the introduction of Targeted Allocation Money and the ability of clubs to carry more than three players making more than the max budget charge, there’s still prestige that comes with the DP label. Zardes is the club’s eighth-ever Designated Player and effectively replaces Argentinian midfielder Federico Higuain as a DP on the current roster. The Crew restructured Higuain’s deal, paid down his charge with TAM, and shifted the DP slot to Zardes.

“Gyasi is a player who truly understands the culture of the Columbus Crew and whose work ethic is second to none,” Crew president Tim Bezbatchenko said in the team’s press release. “Over the last two seasons, Gyasi’s production as the top American goal-scorer in MLS is commendable and so we are pleased that we were able to reach this multi-year extension that reflects how pivotal he is to our continued success.”

The appearance of the word “American” is interesting. It could just be a differentiator, used to pump up Zardes as the club rewards him for scoring goals in an American league. Still, it could also be part of the reasoning behind Zardes’s contract. Perhaps it’s a signal to American players in the Crew system and beyond it’s possible to earn a Designated Player contract as an American in a place like Columbus.

Zardes joins a select group of Americans with contracts carrying the DP label. There are seven other Americans with DP contracts. Only Chris Wondolowski and Dom Dwyer have spent their entire careers in MLS. The other five, Michael Bradley, Jozy Altidore, Tim Howard, Alejandro Bedoya, and Paul Arriola, all came to MLS after burgeoning their reputations abroad.

League history points further to just how rare an MLS-bred Designated Player truly is. Even a generous reading of past DPs adds just a trio, or a quartet, of players to the list of American players who earned said contract from their performances in Major League Soccer. Sporting’s duo of Matt Besler and Graham Zusi are the most obvious comparisons. Like Columbus, Sporting is a club that operates below the top echelon of spenders and sees value in rewarding committed American players.

No matter how long Zardes’s name is attached to the Designated Player tag, it’s a notable achievement. Zardes’s career hit a lull towards the end of his stay with the Galaxy. A history with setbacks that led to a contract that will pay him more than the max budget charge and earned him the honor of “Designated Player” deserves celebration. It might not become the norm across Major League Soccer, but at least now we know it’s possible.