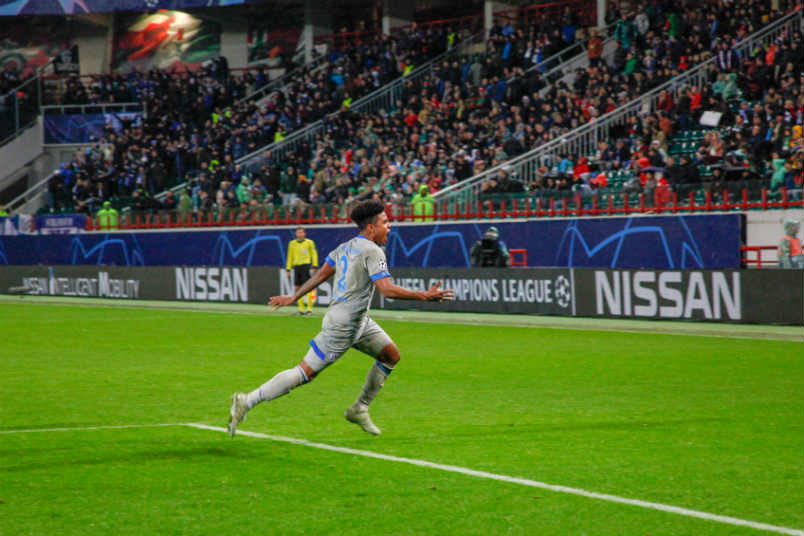 By Charles Boehm – WASHINGTON, DC (May 3, 2019) US Soccer Players – In a season marked mostly by misery, Saturday afternoon brought unexpected euphoria for Schalke 04. Few expected them to taste victory as they made the short trip to Signal Iduna Park in Dortmund for the latest edition of the Revierderby. It’s perhaps the fiercest rivalry in Germany, with Borussia Dortmund chasing the league title and Schalke perched precariously above the relegation zone.

Yet, 90+ breathless minutes later, the visitors were celebrating a memorable 4-2 win with massive implications for both ends of the Bundesliga table. Weston McKennie and Die Knappen aka “The Miners” might well have ruined BVB’s championship hopes while simultaneously safeguarding their own place in the top division.

Survival aside, season’s end can’t come soon enough for Schalke. The Royal Blues have plunged from last year’s 2nd-place finish to their current position in 15th, sparking misery and rage among their devoted and demanding fans. Even a run to the UEFA Champions League knockout stages led to pain and suffering, in the form of a 10-2 aggregate defeat to Manchester City in the round of 16. That humbling brought on the end of the line for their charismatic young coach Domenico Tedesco, with old hand Huub Stevens returning as the interim boss to steady the ship.

This week, reports broke suggesting that former USMNTer David Wagner is on track to become Schalke’s next coach. Should it come to pass, it looks like a watershed moment not only for Wagner, but also one of the biggest clubs in Europe and the US program at large.

There’s something fitting about the German-American coach who helped nurture Christian Pulisic, Terrence Boyd, and Joseph Gyau at Dortmund taking over at what might be the most American-heavy club on the continent. McKennie is a trusted starter for Schalke. Attacker Haji Wright has made strides in that direction over the past two years. Virginia-born playmaker Nick Taitague, 20, has quietly been grinding away on the reserve team and might get first-team opportunities soon.

The Miners are clearly on the lookout for more talent, and fans, in North America. They signed Atlanta United academy and US youth international Zyen Jones last year, though his stint there ended after just five months. New Jersey product Chris Gloster trialed at Schalke before joining Hannover 96. The club sponsors Kick It, a traveling 3v3 soccer tournament event in the United States, and has ramped up US-oriented and other social-media offerings in recent years.

Wagner left England’s Huddersfield Town in January after three years, by what leadership emphasized was a mutual parting despite deep struggles in year two in the Premier League. It was a tribute to his work and legacy there that he did so with his reputation intact even with the Terriers stuck at the bottom of the table all season. Wagner oversaw remarkable achievements at the small club. When he arrived, relegation from the Championship was a real threat. He quickly engineered a startling turnaround that led to a dramatic promotion playoff triumph in 2017.

Aided by the midfield work of USMNTer Danny Williams, his Terriers defied widespread predictions of immediate relegation to finish 16th. An unlikely win over Jose Mourinho’s Manchester United and May draws vs Man City and Chelsea earned what many consider one of the most impressive underdog achievements in modern EPL history. Also important, Wagner did it with modest spending, meaning even their impending relegation shouldn’t spell financial doom.

“We now call it the Terriers’ identity,” Wagner told The Guardian in 2016. “Exactly the style of football I love is like a terrier. We are not the biggest dog, we are small, but we are aggressive, we are not afraid, we like to compete with the big dogs and we are quick and mobile and we have endurance. We never give up. This small dog has fighting spirit for sure.”

He’s a close friend and understudy of Jurgen Klopp and the two share a taste for high-energy pressing and forward-thinking leadership. Now he may get the chance to implement those principles at one of Germany’s giants, a proud, blue-collar club hungry for stability and success, icons, and identity.

“We want speed in our game, everything full-throttle,” Wagner explained in an interview two years ago. “We want aggression, we like to press high, we like to keep the ball, we like to show emotion.”

That mentality could fit well at Schalke, whose history is interwoven with Gelsenkirchen’s mining and industrial past. They can compare to Klopp’s Liverpool or beloved sports teams of the American Rust Belt, where a central place in the community and close links to its collective identity can inflate the emotional intensity of both the highs and lows.

German journalist Raphael Honigstein recently wrote of the fanbase’s “deeply fatalistic streak and an unhealthy obsession with hard work on the pitch that runs contrary to their illustrious past.” They carry seven league championships on their honors list, but none since 1958. It’s a high-risk, high-reward assignment.

From a USMNT standpoint, it’s inspiring to consider a bright young coach with US ties guiding young Americans in a front-foot playing philosophy. He’d also have a significant influence on McKennie’s form and function at the dawn of a new World Cup cycle.

The 20-year-old Texan midfielder was close to Tedesco and credits his former coach’s tutelage for much of his progress. That said, over the past year or so McKennie became a utility player, shuffled among several positions from week-to-week. He would benefit from some stability as he aims to reach a new level in his career. Conversely, Taitague and Wright will aim to state their cases for bigger roles to the new management.

Wagner attained a university degree and worked as a full-time teacher as he gained his coaching licenses after the close of his playing day. It shows in his approach to the craft. He’s also shown a flair for the unconventional, taking his Huddersfield group to a remote island off the coast of Sweden for a back country bonding experience during one preseason. He’ll test his full skill set if he takes over at Schalke, one of the biggest stages a USMNT alum has ever coached on. Should he find success, it can only benefit American soccer.