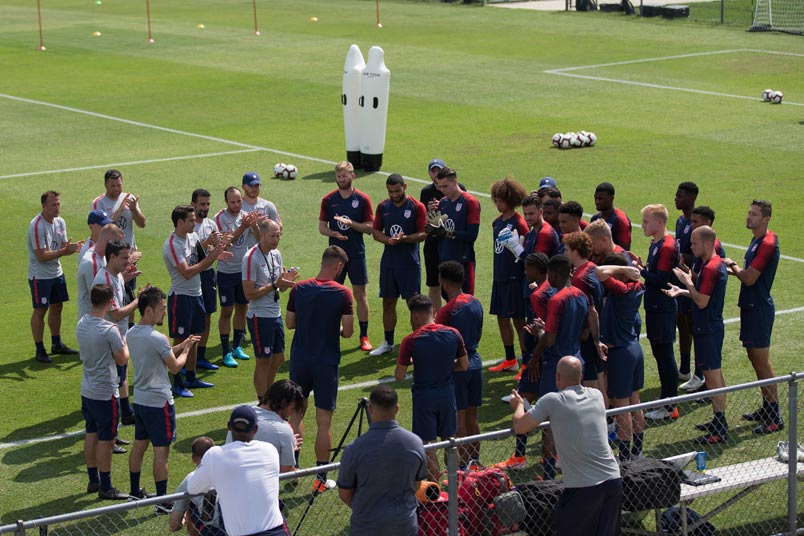 By Charles Boehm – WASHINGTON, DC (May 31, 2019) US Soccer Players - The pitches are quiet, lush and manicured, backed by a head-turning vista of sailboats, seagulls, and forests along the Severn River. Surrounding them, a gorgeous facility that's equal parts college campus and military base offering both calming beauty and high-grade security, populated by polite men and women in uniform.

Just a few blocks away, the Maryland State House anchors one of the oldest and prettiest downtowns in America. The steamy humidity of a Mid-Atlantic summer has arrived just in time to draw out the sweat and underline the work ahead for both coaches and players.

The USMNT have gathered in some gorgeous locations around the world over the years. Their current spot at the US Naval Academy might just rank among the prettiest. Few others can drive home the pride, and expectation, that comes with wearing the crest, especially when camp opens on the nation's day of remembrance.

"Being here at such a historical place here in Annapolis at the Naval Academy, it feels great," defender Omar Gonzalez said this week. "Especially coming here on Memorial Day, we just have to pay our respects, thank our servicemen for everything they've done. And I think to start camp here really puts the emphasis that it means something to put on this jersey, and moving forward, we have to wear this jersey with pride and give it everything we have."

This is what the US Soccer Federation calls a combined preparation camp, a hybrid group of Gold Cup hopefuls whose club seasons have ended and Under-23 players in the mix to be part of Jason Kreis' squad for Olympic qualifying later this year. To fill out the numbers, Berhalter and his staff also called in a few youngsters from outside the roster, a few from Navy's NCAA team as well as DC United academy prospect and U-17 national teamer Bryang Kayo, providing them with a memorable taste of the USMNT environment.

It's a quiet round of hard work before the rest of the squad arrives next week. The spotlight gets hotter, with a friendly vs Jamaica 35 miles down the road in Washington DC on Wednesday (7pm - FS1) opening in earnest the countdown to the Gold Cup.

"We have a couple different objectives for this camp," Berhalter said. "I think the first thing is to prepare some players to participate in the Gold Cup, and then the second half of that is integrating some of the national teams and working with some of the younger players that are with the U-23 group, working together with the coaching staff and making sure we're on the same page. But also giving these guys a taste of what it's like at the national-team level."

There are also some intriguing names in the mix. With the preliminary 40-man Gold Cup roster announced on May 20 but the final 23-man squads not released until next week, Berhalter has a wide net. He's used it to check on several talents who've been off the general USMNT fan radar for various reasons.

Joe Gyau, healthy again after some two years of his career lost to knee injuries, returns after almost five years away from the USMNT picture. Emerson Hyndman got the call fresh off his first English Premier League appearance in nearly a year for Bournemouth. After years of recurring interest from across the pond, Duane Holmes is finally firmly in the mix to earn his first USMNT cap.

"This is a time where it's difficult to get guys playing in MLS [released], and they're available," said Berhalter. "And for us it's, 'OK, we've been watching you during the season, what you've been doing for your clubs, and now it's nice to see you in person.'"

For them and many others, this week is a priceless opportunity to immerse themselves in Berhalter's meticulous management style and intricate tactical concepts just like previous call-ups in January and March.

"The goal of the first two camps, the January camp and the March window, was to progress, get guys understanding what we're trying to do. And this camp, it's a different objective in terms of building the style of play and culture of the men's national team. This is more of an integration camp, looking at younger players and working together," said Berhalter.

"It's a new group, I think there's only three players that have been with us before, so it very much is that part of it," he added when asked about the educational aspect. "But that's the fun part of it, the instruction, the working together, the getting ideas from them. It's been fun."

Berhalter is still putting his stamp on the program, not only with the players on the field but in the way he wants everything in and around the team to operate. In the segments of Tuesday's training session open to the media, he looked like both a manager and a coach. He was instructing and connecting with individual players while also guiding the group as a whole in exercises centered on buildup and combination play.

With veterans, newcomers, U-23s, and guest players all commingled, happy to wrestle with the same ideas and demands of the first-year coach, the outlines of a more unified national-teams system and a brighter collective future seemed to be taking shape. The challenges of the coming months will surely test that hopeful vision.

"It's good to get everyone on the same page, let the U-23 guys know what's going on on the full men's team so that when they make the transition, they can jump right in," said Gonzalez. "I'm very impressed by some of these guys already and I'm sure that they'll be into the full team in no time.

"It's a process," he added, "and slowly but surely we'll get things right. Hopefully by the time our first game comes around for Gold Cup, we'll be flying."