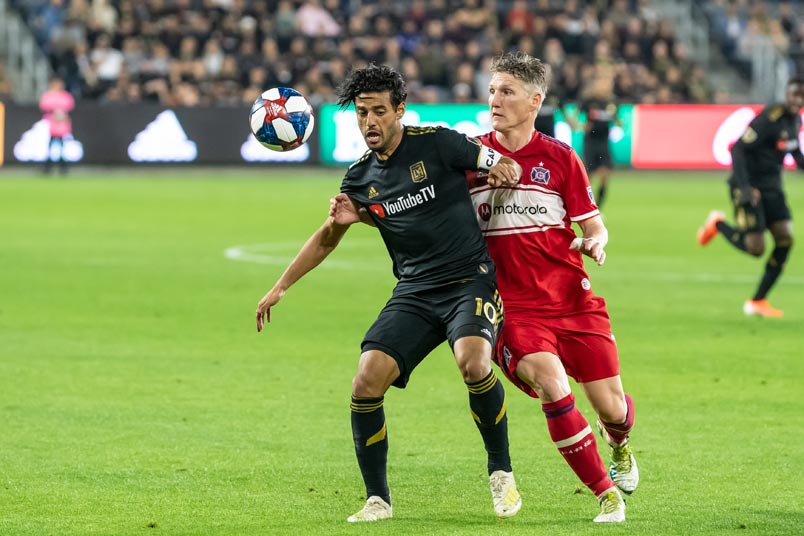 By Luis Bueno – RIVERSIDE, CA (May 15, 2019) US Soccer Players – Since 2019 is an odd-numbered year, Major League Soccer is taking a brief hiatus in June because of the Gold Cup. MLS will stand down during the tournament’s group stage, but games will pick back up when the knockout rounds begin. For teams like LAFC, who has a star player from one of the participating Gold Cup nations, that should mean playing a man or two down while that man or two finishes up the tournament with their respective national teams.

LAFC after all has Carlos Vela, one of Mexico’s top players and a key part of El Tri’s 2018 World Cup roster. With a new national team coach at the helm, seeing how a top player like Vela fits into the squad would seem to be a priority.

It’s a good thing for LAFC then that it’s not.

Perhaps Mexico’s new coaching staff would like for Vela to be that priority, but Vela wants no part of it. According to Mexico manager Tata Martino, Vela declined a call-up to the national team to be part of the preliminary Gold Cup roster.

“We had the possibility to talk with Carlos Vela last week,” Martino said in a press conference on Tuesday. “He expressed to me that his family and club are the priorities and he prefers to step aside.”

Mexico’s 29-man preliminary Gold Cup roster is out and does not include Vela. Earlier this year, Martino put out his first roster with the national team and left Vela out. This entire year could be one that will not see Vela suit up for any team other than LAFC.

Vela has had a sordid past with the national team despite his unquestioned ability. A player of Vela’s caliber and pedigree should be the focal point of Mexico’s squad. Instead, he’s not involved.

That he chose family and club over country is a bit remarkable given the gravity of the call-up. Not only is Mexico hoping to reclaim the Concacaf championship, they’re looking to start anew under Martino. Mexico onlookers are hopeful that Martino will have El Tri playing with a much more fluid, attacking style.

Vela may not be a part of that, but that’s not necessarily a bad thing. By choosing family and club over country, Vela is showing support for both LAFC and MLS as well as his stellar individual showing this season. Had he not rated either his club or his league highly, he may have jumped at the chance to represent Mexico in the Gold Cup once more. Instead, Vela is showing that his club is important to him and his organization and his MVP-like campaign will continue unfettered.

Through mid-May, LAFC is the best team in MLS. That makes Vela the best player on the best team in the league. He leads the team and league in goals with 12. He also has six assists. Consequently, LAFC has a league-high 29 goals and is on pace to topple offensive records this season.

Losing Vela for part of that may have thrown things off some. The train may not have derailed, but there could have been delays and setbacks. Instead, LAFC should continue building on its success, as it has throughout this season.

Now, Vela and Mexico have some history between them. For instance, when he was hitting the prime of his career, Vela was a Tricolor exile. Vela has had previous run-ins with the Federation, perhaps a negative history with that. Initially, he played from 2007 to the 2010 World Cup with no major issues. He started the first two games of the 2010 World Cup. That tournament turned out to be Javier “Chicharito” Hernandez’s coming-out party, not Vela’s, possibly because of an injury he suffered against France that forced him to the sideline for good.

After a party-gone-haywire in Monterrey, Mexico, before a friendly a few months after the 2010 World Cup. Vela was fined and suspended by the FMF. Although he played in two games in 2011 with El Tri, his participation slowed down considerably after that. He began to refuse call-ups, passing on the 2012 Summer Olympics, World Cup qualification matches in 2013, and eventually the 2014 World Cup.

So, perhaps this most recent “no thank you” is more than just Vela opting to stick with LAFC. At the same time though, Vela did return to play with Mexico and was a regular part of the team. He played in World Cup qualifiers, Gold Cup matches, friendlies, and eventually the World Cup, scoring a goal in the 2-1 win over South Korea.

Since Martino took over the national team though Vela has not been part of the squad. With Martino’s first set of matches, he passed over Vela and opted to not take him despite taking an otherwise strong roster. Now when he came calling Vela was the one who passed.

While a player who wants to continue playing for the national team and hoping for further call-ups would be very careful about when to pass on a national team invite, Vela is not that player. Committing to LAFC and MLS seems to be his priority now and not the national team.

Vela’s prior history with the Federation suggests that Vela is not a fan of FMF executives. Had he been treated more professionally in 2010, things may have gone differently. Whatever role that played in his international career, it is certainly LAFC’s gain. If LAFC does reach MLS Cup, perhaps the club can thank a series of events that happened years before they were even a club.