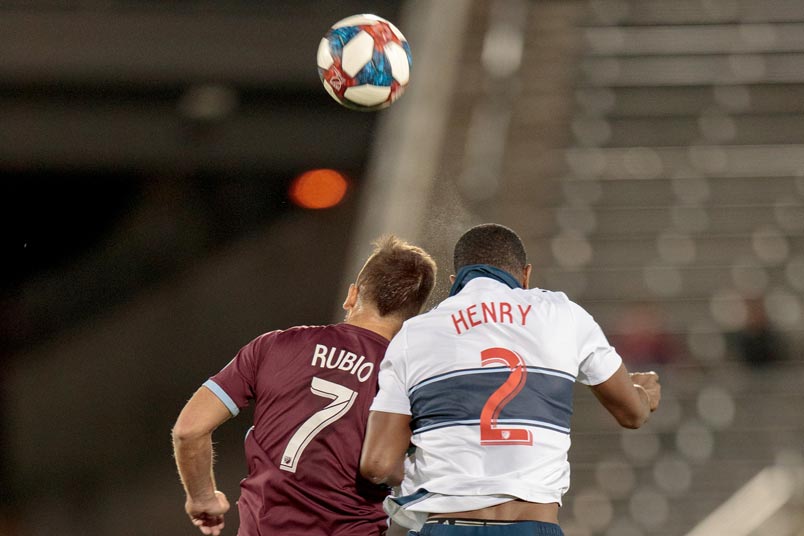 Week 10 started on Friday with Vancouver beating Colorado 3-2 on the road. Fredy Montero opened the scoring for the Whitecaps in the 16th minute, assisting on Lucas Venuto's goal in the 26th. Kei Kamara converted penalties for Colorado in the 38th and 53rd minutes. The Rapids went a man down in the 77th with a red card to Diego Rubio for violent conduct. Andy Rose scored for Vancouver in the 87th minute.

"Disappointed, I’m disappointed for the guys," Colorado interim coach Conor Casey said of his first game in charge. "They left everything on the field once again, they’ve given everything, they’ve fought until the last minute. Frustrated, they deserved to win, they are working so hard every week, we just haven’t been able to get over the hump and get those three points yet."

"I think we have a very solid game overall," Houston coach Wilmer Cabrera said. "We were very organized, very solid. Maybe we could have done better sometimes with the ball because we were rushing—too rushed to take decisions in the last 25 yards, I believe. But other than that I think it was a good derby, tough but I think we never failed. We never failed."

Toronto beat Orlando 2-0 on the road. Michael Bradley assisted on Jonathan Osorio's goal in the 65th with Jay Chapman doubling the lead in the 77th.

NYCFC shutout Montreal 2-0 at Stade Saputo. Maxi Moralez scored in the 6th minute and assisted on Ismael Tajouri-Shradi's goal in the 49th.

Philadelphia beat New England 6-1 at home. Jack Elliott put Philadelphia up in the 11th minute with New England's Juan Fernando Caicedo equalizing in the 35th. Ilsinho put the Union up for good in the 47th with Sefio Santos scoring in the 69th and 74th. Kacper Przybylko score in the 82nd with David Accam finishing off the Philadelphia goals in the 88th minute.

"We need to be strong and stay in the game no matter what happens, to be honest with you," New England coach Brad Friedel said. "I know we have a group of guys that can do that. I firmly believe in that. It’s up to us to right the ship and it’s up to us to give our fans something to cheer about very soon."

DC United beat the Columbus Crew 3-1 at Audi Field. Luciano Acosta scored in the 27th with Wayne Rooney converting a penalty in first-half stoppage time. Paul Arriola scored in the 61st minute. DC gave up an own-goal in the 75th minute. Columbus took issue with instant replay, arguing that the officiating denied them an early goal.

"They weren't threatening at all," Crew coach Caleb Porter said. "We knew the transition would be on, which it was. We were lively, we got on the ball… everything was spot on. Then obviously we score a goal, and we all know what happened… It’s a fair goal, it’s a fair goal, 100 percent. The referee gives it away, referee fouls Acosta, and then the referee looks at a television to bail himself out. I’ve never in my life seen anything like that. Everything was spot on out of our guys and that’s a fair goal, we should have been up 1-0."

Minnesota United and the Seattle Sounders drew 1-1 at Allianz Field. Ike Opara put Minnesota up in the 26th minute with Cristian Roldan equalizing in the 42nd.

Portland beat Real Salt Lake 2-1 at Rio Tinto Stadium. Sevastian Blanco put the Timbers up in the 34th with Sam Johnson equalizing in the 62nd. Diego Valeri scored for Portland in the 68th minute.

"We are using momentum to get these points back because we lost a lot of points at the start of the season," Valeri said. "And it's really important on the road and we had good performances. So that's the most important for us. To keep building from those performances and then the points will come."

"The start of the season we had was a little rough," San Jose midfielder Jackson Yueill said. "I think we were getting used to the system. I think we got the way of the game under our feet a little bit and I think we started building confidence. Since the game against Portland, I think we saw the way that the system could work, and I think that boosted our belief in it."

LAFC drew 0-0 at home with Chicago. LAFC had five shots on goal to the Fire's one.

"I think it was a very interesting game," Chicago coach Veljko Paunovic said. "When you see the result, maybe you won’t say that but I think they had their opportunities, we had our opportunities. It could go either way. But, at the end of the day, I think we had a very smart approach in the first-half. In the first 15 minutes, we gave away the ball and we wanted to counter attack."

Week 10 ended in Kansas City with Sporting KC losing 3-0 to Atlanta United. Josef Martinez put United up in the 39th with Ezequiel Barco doubling the lead in the 47th. Martinez scored again in the 76th. Brad Guzan made three saves to keep the clean sheet.