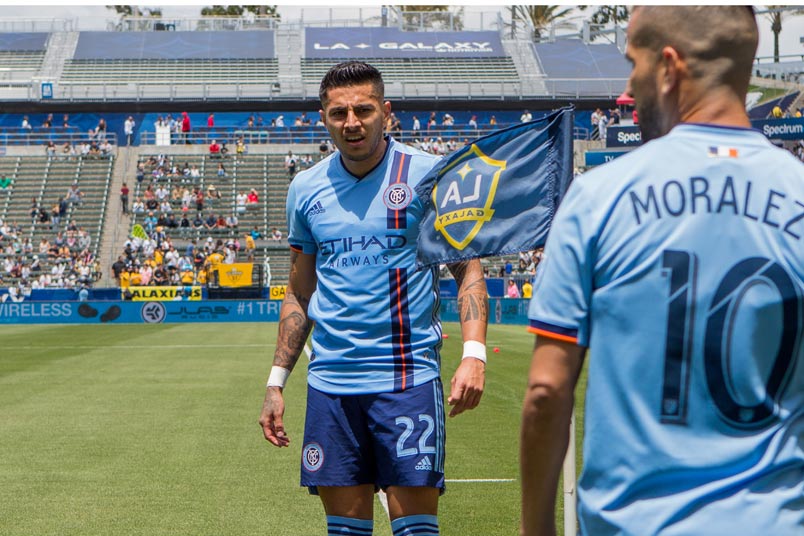 Shutouts marked week 11 of the 2019 MLS season, including NYCFC winning an inter-conference match-up at the LA Galaxy and LAFC doing the same with a clean sheet at Columbus. Philadelphia stays put atop the East with a win over Toronto.

The shutouts started on Friday, with Vancouver beating Portland 1-0 at home. Fredy Montero scored in the 9th minute with Maxime Crepeau making five saves to keep the clean sheet. Once again, the game at BC Place had a fan protest with both the Whitecaps and Timbers supporters groups walking out of the stadium in the 35th minute.

"This was the team that was in the MLS Cup final," Vancouver coach Marc Dos Santos said. "They’re a good team and it’s normal when you play good teams that they come at you. We were able to be solid, we were able to show commitment between everybody, and in transition, we had plays that were exciting and could’ve finished with a goal. Overall, I think with what we did in the 90 minutes, we deserve the three points against a very good team coming from three wins in a row so the guys did a very good job."

Saturday started with FC Cincinnati beating Montreal 2-1 at Nippert Stadium. Alan Cruz put the home side up in the 7th minute with Fatai Alashe doubling the lead in the 62nd. Orji Okwonkwo pulled a goal back for San Jose in the 75th.

The Red Bulls beat FC Dallas 3-1 on the road. Cristian Casseres Jr scored for New York in the 12th minute with Jesus Ferreria equalizing in first-half stoppage time. Sean Nealis put the Red Bulls up for good in the 58th with Brian White scoring in the 85th.

Philadelphia beat Toronto 2-1 at BMO Field. The Union went up through an own-goal in the 25th with Alejandro Pozuelo equalizing in the 51st. Jamiro Monteiro scored Philadelphia's winner in the 68th.

NYCFC shutout the Galaxy 2-0 in Carson. Heber scored in the 44th minute with Maxi Moralez converting a penalty in first-half stoppage time. Sean Johnson didn't need a save to keep the clean sheet.

LAFC beat Columbus 3-0 on the road. Mark-Anthony Kaye scored in the 37th with Adama Diomande doubling the lead in the 88th. Carlos Vela finished off the LAFC goals in the 90th minute. Tyler Miller kept the clean sheet with one save.

New England beat San Jose 3-1 at Gillette Stadium. Juan Agudelo put the Revs up in the 18th minute with Cristian Penilla converting a penalty in the 29th. Carles Gil made it 3-0 New England in the 68th. Valeri Qazaishvili scored for the Earthquakes in the 88th.

"I just think we've got to keep working and fighting," Earthquakes midfielder Siad Haji said. "Other than that, I'm proud of these guys, I'm proud of everything they have done. Being able to support everybody, one another, especially for the young guys, I think that's the big key."

Chicago shutout Minnesota 2-0 at home. Nicolas Gaitan scored in the 21st with Aleksandar Katai adding a goal in the 34th. David Ousted made two saves to keep the clean sheet.

"Coming off the result against LAFC, we knew we had two home games," Chicago midfielder Dax McCarty said. "We knew we had dropped some points at home earlier in the season so picking up six points in these last two games was crucial and it's a good feeling. It's a good feeling when you put together three consecutive good performances and then you can feel like you built some momentum heading into an important summe

Real Salt Lake beat Colorado 3-2 at Dick's Sporting Good Park. Albert Rusnak converted an RSL penalty in the 25th minute with Corey Baird making it 2-0 in the 27th. Kellyn Acosta pulled a goal back in first-half stoppage time and Danny Wilson equalized for Colorado in the 47th. Sam Johnson scored RSL's winner in the 53rd minute.

"I just wanted to start and say the fans were unbelievable tonight," Colorado interim coach Conor Casey said. "The atmosphere in the stadium, it’s been one of the best atmospheres that we’ve had all year. We started slow, unfortunately we've gone down 2-0 in the last two games, but the character of the group to come back once again and even the score. They never gave up on each other. We’re all very disappointed, there’s no question about it. The group knows it is moving in the right direction. We didn’t get the result we wanted tonight, but there was a lot of good, positive things to take away from tonight."

Seattle shutout Houston 1-0 at CenturyLink Field. Cristian Roldan scored in the 5th minute with Stefan Frei making one save to keep the clean sheet.

"I thought we deserved a little bit better from that game," Sporting KC defender Seth Sinovic said. "I thought we put together a pretty solid performance. It was just a great goal and a great finish. There’s always things we can be better on but we have to build off this. Obviously upset and disappointed with the result but we gotta build off the good things and take it into the next game."