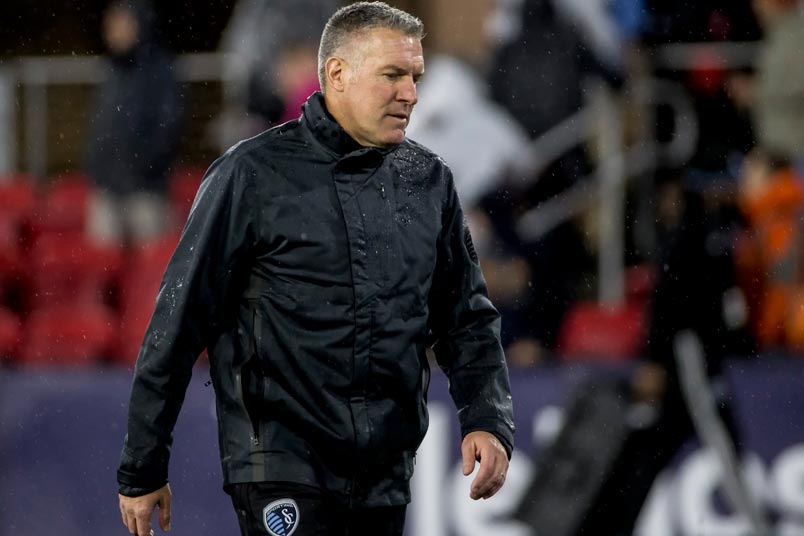 By Charles Boehm – WASHINGTON, DC (May 16, 2019) US Soccer Players – With his trademark flat-top haircut, straightforward manner, and unquestioned authority over technical matters as Sporting Kansas City’s longtime coach and sporting director, Peter Vermes carries something of an old-school vibe. The former USMNTer and founding MLS player is presently getting an unwelcome throwback to the league’s early years thanks to an objectively incredible injury outbreak.

Back then entire MLS rosters only had 18 slots. Of those, only 16 players traveled for away games. They were threadbare squads compared to today’s 30-man units, many of which are backed by USL reserve teams. At present, SKC doesn’t even have enough healthy bodies to fill a 1996 gameday roster.

SKC are missing 11 first-team regulars to a litany of injuries, several of them serious. They’re also without Homegrowns Gianluca Busio and Tyler Freeman due to international duty with the USMNT U-17s. This isn’t just a sequence of soft-tissue tweaks and strains, either. As the Kansas City Star noted, Sporting is even discovering additional damage on players already sidelined by other issues. Jaylin Lindsey and Erik Hurtado this week underwent surgeries to repair wrist problems while they rehab from unrelated knee injuries. Even with USL Championship side Swope Park Rangers under the club’s umbrella, it’s left Sporting dangerously thin.

“We have nine guys out – not hurt, but injured. I mean, OUT out,” Vermes told USSoccerPlayers.com as his team visited the nation’s capital over the weekend for a clash with DC United. “I don’t know any team in the world – maybe Man City, maybe Liverpool, but I don’t know if they maintain the same level – if they have nine guys they would consider starters on their team out, I don’t know how anybody deals with that.”

Vermes could dress only 15 players for that match, the fourth one this year in which KC has been unable to fill an 18-man gameday squad. Despite his team’s admirable battling spirit on a rainy, cold night, they were cruelly denied a road point by a late winner from Paul Arriola. Which is just the sort of break that goes against you when you’re already fighting out from behind the 8-ball.

“I’m not going to change who we are, for so many reasons,” said Vermes, whose side played some of the most attractive, possession-oriented soccer in the league earlier in the spring. “We worked so long and so hard to have an identity in the way we want to play, and we’ve brought other guys in. The only difference is that usually when you bring guys into a team, they’re usually supported by eight, nine [incumbent] guys. Maybe you make two changes and they’re supported by nine guys, or seven guys, and you have your continuity. So it’s just working and trying to find all the bright spots and just keep building off of that.”

It’s no coincidence that SKC haven’t won a league game since March 30, their longest such skid in three years, and are winless in eight games across all competitions. It’s also not happenstance that they are the MLS team that made the deepest run in the Concacaf Champions League, reaching the semifinals before losing to eventual champions CF Monterrey.

Sporting is pretty clearly carrying a splitting CCL hangover. In this regard, they’re continuing a trend. In recent years some of the league’s strongest representatives in the regional competition have slipped into a tailspin after the tournament.

FC Dallas went from 2016 Supporters’ Shield and US Open Cup winners to missing the playoffs a year later after experiencing CCL heartbreak via a narrow semifinals loss to eventual winners Pachuca. Last year Toronto FC’s case was particularly vivid. The 2017 treble winners got closer to becoming Concacaf champs than any MLS contender in the modern era before ending up in 9th-place in the MLS Eastern Conference standings, clearly exhausted down the stretch.

“We were very aware of that, we really were, going in,” said Vermes of the CCL’s dangers. “The way that we tried to mitigate it was we changed our offseason training program for the guys when they came in, then we had a longer preseason, which was even better in that we didn’t have to hurry them up too quick.”

Going from offseason to preseason to tense knockout cup ties against stiff international opposition in a matter of weeks is a serious challenge in fitness and tactical terms. It’s also a daunting mental mountain to climb, one with few comparisons in MLS.

“It’s not the fact that you’re playing a game right away, it’s that you’re playing a game that you have to win. Because the CCL is a two-game series and you’re already in the results-oriented business in that if you fail you’re out, you’re done,” said Vermes. “There’s a physical aspect you have to be ready for, there’s also a mental aspect. And when you get knocked out, for every team, there’s a reset button that you have to hit. Because you have to now get ready that the league is 34 games. If you lose a couple, it’s not the end of the world, you’re not like knocked out of the league and you can’t play games anymore. That’s why everything culminates to the end. We played two [CCL] games before the league even started, and we had to win. And it’s a difficult mindset.”

As Vermes puts it, Sporting have “played more than half a season already, comparatively speaking, than most other teams” due to their CCL run. While some players further down the depth chart are glad to get their chance to contribute, others are more or less just hanging on.

“Look, some guys are getting opportunities, some guys are actually taking on a lot of the burden because they have been healthy,” he said. “But the problem is they’re having to play so many games in a row, whereas normally you would give a guy a break here or there because all the other guys are healthy. And we can’t do that… You’ve got a bunch of guys that are enthusiastic, some other guys that are fighting through a time that is not just physical but is mental as well.”

So given how viciously the CCL can grind down even the best MLS teams, is the league’s long-deferred dream of winning the tournament effectively mission impossible? I asked Vermes, whose side ran into a buzzsaw in Monterrey, a wealthy Liga MX club with enough resources to use players who would be Designated Players in MLS as substitutes.

“I think everything has to go perfect for a team to win,” he answered. “You have to have no injuries, we have to be deeper into the [MLS] season – it has to change. But then you can’t deny that there is a financial aspect that has to change as well. Because at times they’re pulling DPs off the bench to play in the game… [players] they were paying $12 million transfer fees for, coming off the bench. I can tell you this: I’ve been in the club for 13, 14 years now, and cumulative, didn’t spend $12 million on all players ever purchased at the club. That’s a big difference.”

SKC’s schedule calms down a bit in the weeks ahead. They expect to get key figures like Matt Besler and Jimmy Medranda back to full speed soon. Busio and Freeman will help when they return from U-17 World Cup qualifying. In the meantime, Vermes will try to keep his slumping group’s confidence off the floor. Meanwhile, the rest of us can ponder how MLS plans to help future contenders avoid what’s turned into the Champions League problem.