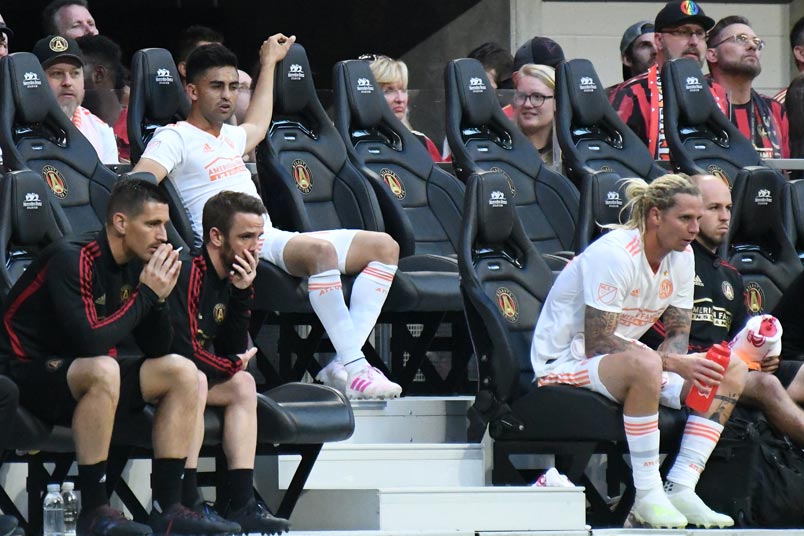 By Jason Davis – WASHINGTON, DC (May 1, 2019) US Soccer Players – Atlanta United’s first home win of the season on Saturday didn’t do much to quell fears that head coach Frank de Boer’s system is still in need of a few tweaks to get the defending MLS Cup champions back to their best. United dominated possession. However, like multiple times already this year, that possession didn’t mean a dramatic edge in goal-scoring chances. If not for Darlington Nagbe’s dribbling and Julian Gressel’s opportunistic goal, Atlanta might have found themselves going through another week of intense self-examination.

Well, another week of intense self-examination prompted by a bad result. Again, fears remain. The win over the Rapids still managed to present new problems beyond the ineffective system.

In the 71st minute, de Boer removed Pity Martinez from the game with the scoreboard still reading double zeroes. Martinez, clearly unhappy, lashed out at his manager and kicked the seat in front of him in frustration. This being 2019, more than a few cameras caught the moment.

If it was almost any other United player, that outburst might fade amidst bigger concerns. For Atlanta, Martinez’s anger speaks to deep-seated issues that might take some time to correct. If Pity isn’t happy, what does that say about United’s chances to turn their season around?

Martinez is a practically the avatar for United’s painful transitional period. The 25-year-old Argentinean playmaker arrived at the club on a wave of fame and glory following his success at famed River Plate. Martinez concluded his run with a Copa Libertadores title and the South American Player of the Year Award.

Though the exact fee is shrouded in several layers of MLS-style mystery, Martinez likely joined Atlanta for an MLS record amount of money ahead of the new season. His move roughly coincided with the departure of Miguel Almiron for an outgoing record fee, naturally foisting upon Martinez the responsibility of leading the United attack as Almiron’s replacement. United, Major League Soccer’s unchallenged most ambitious team, made the move necessary to go from strength-to-strength.

While Atlanta isn’t Manchester and this United is not that one, the fee carried with it the burden of massive expectations. Almost no one expected Martinez to struggle as much as he has. Or, if we’re being a bit more generous, as much as he has seemed to. The South American Player of the Year was supposed to dominate in MLS, likely setting the stage for Atlanta to repeat the feat of sending Almiron to the English Premier League for a hefty fee. Talent is talent, no matter the league.

The easy explanation for Martinez’s struggles is the one that also sheds light on the paucity of early season scoring for reigning Golden Boot winner and all-time single season goal-scoring record-holder Josef Martinez. It’s the same one that explains Atlanta’s position in the table and why any goal is so hard to come by. The system is the problem.

A check under the hood of Atlanta’s efforts this year reveals a team that is creating fewer chances and taking shots from longer distances despite having more of the ball. The combination of factors that made Atlanta successful in 20217 and 2018 under Tata Martino has broken down as de Boer asks his team to be more methodical.

The interesting thing about that narrative when it comes to Pity Martinez is that Martinez’s game is not at all like Almiron’s. Where Almiron was vertical and aggressive almost to a fault, Martinez is more want to put his foot on the ball and make things happen with trickery rather than speed. Almiron wants the game to move faster whenever possible. Martinez wants to slow it down.

It’s reductive, but the reason Martinez is struggling isn’t necessarily because he can’t replicate when Almiron did for Atlanta. It’s because nothing about Atlanta’s approach is working properly. The shift in Atlanta’s system should have been perfect for Martinez. So far, it hasn’t been.

What that means is that Martinez’s failure is probably more collective than individual. The simplest way to evaluate his play is to point out his individual mistakes or speak in general terms about his lack of influence. The expectations that Martinez hauled with him from River Plate make it difficult to suss out his part in the greater picture of Atlanta United. Beware the camera, a device that obscures the whole function of the team and over accentuates the potential of one player to change a game.

The trends that have hit world soccer in recent years have also hit MLS. The individual is much less important than the whole. No one player outside of historically great players like Messi or Cristiano Ronaldo can dominate games purely on their own. Diego Maradona is not walking through that door because the sum total of soccer thought over the last decade brought us to a place where his style of play is nearly impossible.

The weaker the squad that surrounds an elite talent in the modern game, the greater the pressure for that player to perform. With no offense meant to Atlanta United’s roster, the quality of the players that surround Martinez is not good enough to lessen his burden to carry the team when he’s on the field. Moreover, the position of MLS as a smaller league that rarely gets talent on the way up at the price Martinez commanded, means he can’t escape the spotlight.

This isn’t an issue of Martinez “trying harder”. Placing the responsibility for his integration solely on his shoulders ignores everything else that is wrong with United. It hearkens back to an old way of thinking that values desire over everything else. It gets complicated when the instructions players receive put them in positions to look uninspired or uncaring to the uninformed eye.

Every player shoulders an individual burden to perform up to requirements. At no other point in history has it been more difficult to separate the individual performance from the tactical plan.

Here’s a not-so-bold prediction made at the risk of sounding obvious. Martinez’s performances will rise dramatically in the estimation of fans and pundits alike when de Boer figures out how to organize the talent available to him in Atlanta into a complimentary group of specialized individual players.

The do-everything player that we might expect a $20 million MLS signing to be doesn’t really exist. Even if it did, opposing teams wouldn’t let that player dominate in the ways we still romanticize. It’s not that expectations for Martinez can’t be high, just that expectations for Martinez should fit with the realities of a sport that makes judging players in isolation a fool’s errand.

Martinez’s frustration at being removed in the match against Colorado at least shows that he cares. Stories about his slow adaptation to life in America are window dressing for his rough start on the field. They serve as convenient, simple ways to explain a more complex problem.