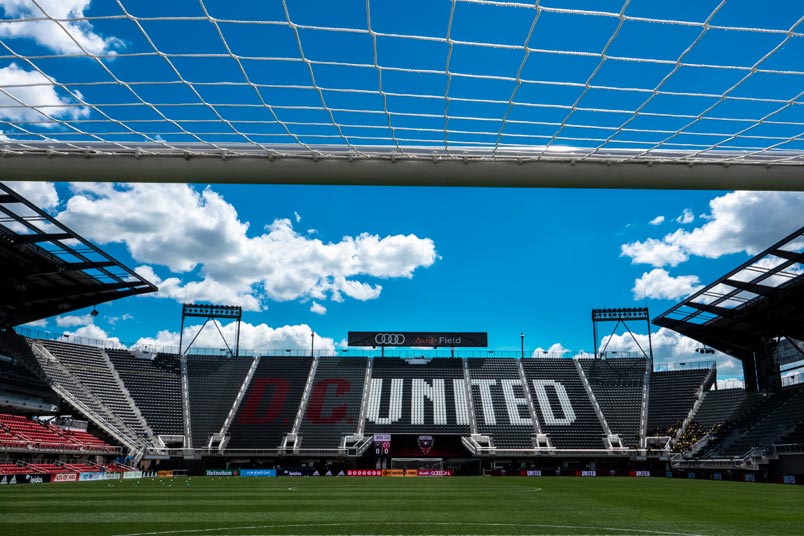 By Charles Boehm – WASHINGTON, DC (May 24, 2019) US Soccer Players – Real Betis arrived in the nation’s capital worn and tired, both physically and mentally. They’d flown across the Atlantic for their first-ever US tour mere hours after the end of a long, difficult season. A 10th-place finish in LA Liga and deep but ultimately unsuccessful runs in the Copa del Rey and Europa League, left players and fans alike frustrated.

Even road wins over Real Madrid and FC Barcelona could not avert the summary dismissal of their respected manager, Quique Setien, shortly before they boarded the plane to the United States. Several players told the coaching staff in DC they were suffering from jet lag.

“We came with an open mind,” fitness coach Marcos Alvarez, pressed into media duties in the absence of a head coach due to his knowledge of English, later said. “Honestly, we weren’t sure what we’d find.”

All that melted away, somehow, when the whistle blew on their international friendly against DC United on Wednesday. The ball pinged crisply among their green-and-white-clad players, who kept an immaculate team shape, moving in unison as if connected by string. A reserve-heavy DC lineup had few answers. A vibrant 5-2 Betis victory left the 11,000-plus fans in attendance at Audi Field entertained.

“That’s a top-30 team in the world right now. They’re real,” said United coach Ben Olsen afterward. “A team like that, if you’re off by one or two players, their ability to take the space and then if you now close that up, they just take the next hole. And they just have so much quality around the field from a passing standpoint, starting from the ’keeper and through the back line. So it was fun to watch them.”

Vibrant as the atmosphere was, Audi Field was barely half full, and the press box even less so. Only the dedicated United supporters who pay a monthly fee for their online broadcasts on FloFC had the chance to watch the spectacle at home. The next stop on the Real Betis tour of the States is lower-division side Chattanooga FC.

Betis are making their first foray into the territory of the superclubs. They’re chasing the holy grail of the “global market” that has by now become old hat for the likes of FC Barcelona and Real Madrid, the giants that loom over them and the rest of La Liga in so many respects. In strictly soccer terms, they do deserve a brighter spotlight abroad.

“La Liga is not only Barcelona and Real Madrid,” Betis’ head of international business development Toni Ortega told USSoccerPlayers.com on Tuesday. “We are in a good spot. In terms of size, we are the fourth team in Spain – social media, audience, fans, fanbase – so we have to capitalize on that.

“Our idea is to connect our identity as a humble team, a hard-working team,” he added, “keeping our traditional values but adding innovation and new models into it.”

Betis is adored in their home region, and boast recognizable players like Mexico international Andres Guardado, Giovani Los Celso, and the ageless Joaquin Sanchez. Their average home attendance of more than 44,000 per game last season ranked fourth-best in Spain, behind Barca, Real, and Atletico Madrid.

“Last year we qualified for Europe, we were playing a really good style of football this season and in [Europa League] we played really great games, especially against really historical teams. We qualified for the knockout stage and we also are always playing with an identifiable style,” said winger Cristian Tello when I asked him to sum up why fans on this continent should pay attention to Betis.

The Seville-based club is rich in talent and tradition. They made sure to stress the cultural side with a busy schedule of off-field events in DC at local schools and the Spanish Embassy. That said, growing that into a sizable presence in the US and other lucrative new frontiers looks like an uphill battle, even with the help of La Liga’s new North American office in New York.

“There’s what, 10, 15 teams that really resonate in this country when they come here,” said Olsen. “The Chelseas and the Real Madrids and the Barcelonas. And then there’s that next tier of really high-quality soccer teams that yeah, probably should get more awareness in this country.”

Even the timing of Betis’ tour is revealing. Young Dominican-Spanish wingback Junior Firpo admitted that it was “a bit strange” for the players to have this trip tacked onto the end of their long season. The reality is that Betis simply isn’t a big enough name here to feature in the ICC. A preseason tour on their own would risk getting lost in the midsummer superclub shuffle.

That’s an indication of the limits of the growing passion and sophistication of the American soccer audience. Still, clubs like Real Betis have little choice but to try to branch out. Not only because there’s potential profits, but simply because the runaway growth of the superclubs threatens to leave counterparts like them in the dust.

“Sports is not only numbers. We are catching up in terms of our budget – we’re coming from behind because of some issues we had in the past with the club, and the new ownership is doing a great job to work in that direction,” said Ortega, referring to financial mismanagement and alleged corruption under former president Manuel Ruiz de Lopera. “It’s going to be slow, but I think in the future we will be able to – not to compete with Barca and Madrid, because they are giants, but to be in the European fight every year.”

In that regard DC United and MLS are an unconventional role model for the likes of Betis. They hope a broader audience can help them build an economic engine no matter the ups and downs on the pitch.

“Europeans, we have a traditional way where relegation and promotion is part of the game. You have always the risk that you have a bad season … and end up in second division, then you will struggle,” explained Ortega. “But our idea is to work towards having a strong brand, a strong club where we don’t depend that much on sports results economically – it all depends on the TV rights, so we have to create a strong brand, commercially, in ticketing and merchandise, all related to the business area … in the US you have mastered that.”

Barcelona and Madrid have long enjoyed a cultural and financial hegemony over Spanish soccer that has simultaneously fueled their overseas popularity. Clubs like Betis are taking heart from recent changes that have chipped away at that dominance a bit.

“Since we had the centralized TV rights, everything has changed, has shifted towards a more equal league,” said Ortega. “This season all the teams were really close to each other, especially from the relegation to the European positions were really close. Every year, any team can win – you’ve seen this year we beat Barca and Madrid at their stadiums. Every year is getting more equal the competition, and it’s all thanks to these TV rights. We still have a long way to go to equalize more, but we’re still working towards that end.”

Among the millions of North American soccer lovers, is there room for a less familiar flavor like Betis? It won’t be a short-term project, yet their swing through DC offered reasons for quiet hope.

“From the moment we got here, we’ve felt comfortable. Folks have been great with us – we feel at home,” said Alvarez on Wednesday. “As for the atmosphere here in the stadium, honestly it felt like Latin America. The fans were passionate, following the play, their team. To us, as professionals, we love that… All of us love soccer. We’re obviously interested in seeing MLS grow, interested to see other players from other countries and see the level of play here rise.”