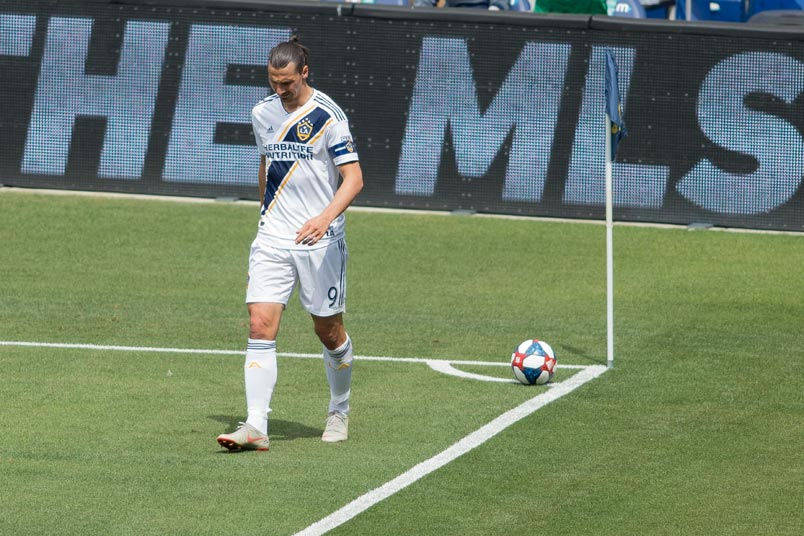 By Luis Bueno – RIVERSIDE, CA (May 22, 2019) US Soccer Players - Through the first two months of the season, the LA Galaxy seemed destined to regain its footing atop the league. The club’s credentials were impressive: a 7-1-1 record, a five-game winning streak, a perfect 6-0-0 mark at home. It finally seemed like the horrors of 2017 were squarely in the rear-view mirror. The turnaround was complete. Then, the calendar turned to May and the Galaxy’s season went south.

March-and-April Galaxy looked like an MLS Cup contender. May Galaxy looks like a victory would be a great accomplishment. The Galaxy has yet to win in May as the club has lost all four of its games this season in one month. The team’s defense regressed. The goals dried up. Suspensions and injuries are all testing the club’s mettle, from the reserves called into action to the coaching staff and front office who are trying to keep the season from completely derailing.

What the coaching staff and management must figure out is if this dry patch is just that and things will work out or if this is symptomatic of something greater. This is, after all, the third major overhaul in as many years. Expecting things to run smoothly this early into a new regime is perhaps expecting too much, even with the impressive credentials of the new coach and general manager.

Dennis te Kloese took over as GM in December. His time with Chivas USA, Tigres UANL, and the Mexican Football Federation more than prepared him for this role. Guillermo Barros Schelotto went from the pressure-cooker that is Boca Juniors straight to the Galaxy position. Barros Schelotto was a star in this league as a player. Having a former standout take over as coach is a good thing. It's usually difficult for foreign coaches who come into the league not familiar with the style of play. Then there are the other challenges such as travel that are unique to MLS.

The Galaxy opted for Barros Schelotto after coming very close to hiring Caleb Porter, who eventually wound up with Columbus. Porter is having his own issues with the Crew, so this transitional period struggle may not be unique to the Galaxy.

Still, the Crew does not have the budget or the same amount of pressure. There's not another MLS team 12 miles away competing in the same market for the same fans and attention and is, oh by the way, also the league’s best so far in 2019.

Perhaps it is too early to wonder if Barros Schelotto and/or te Kloese are the right people for the job. What matters more though is the short term and what lies immediately ahead. The Galaxy slipped from 2nd-place to 4th, from one point out of first to nine points out of first, from the brink of contending for the Supporters’ Shield to questioning whether this team can reach the playoffs at all.

For the Galaxy, getting Zlatan Ibrahimovic back is key. Ibrahimovic served the first of a two-match suspension against Colorado on Sunday and will be out when the Galaxy visits Orlando on Friday. Ibrahimovic should return against Sporting KC on May 29. Not having Ibrahimovic is always difficult. The Galaxy relies on him for scoring goals and without him looked rudderless against the Rapids. The club did not adjust with players sending cross after cross from the flank, this despite not having Ibrahimovic’s 6'4" frame. Instead, it was newcomer Favio Alvarez (6') or Ema Boateng (5'5") trying to get on the end of the crosses.

Ibrahimovic's suspension is due to an altercation with NYCFC’s Sean Johnson on May 11. Without him, the Galaxy lost the author of nine of its 18 goals. It's the loss of another Designated Player that stings just as bad. Romain Alessandrini may have had just one assist in his first five games, but he is a key part of the attack. Alessandrini scored 13 goals in his first season with the club and 11 a year ago. A knee injury that required surgery will keep him out until September.

Added to those problems, the club must also deal with Jonathan Dos Santos’s own struggles. Dos Santos’s play has been immense through the early stretch and is one of the biggest reasons why the Galaxy was doing well in the early going. Dos Santos though left the club’s game at Columbus on May 8 in the first half due to injury and missed the NYCFC match as well. Dos Santos made Mexico’s preliminary Gold Cup roster and will likely be gone for June and into July regardless of his health.

The club has brought in new players like Alvarez and Giancarlo Gonzalez. Perhaps they will each contribute to the club at some point this season. For now, though, the Galaxy’s depth without its Designated Players is the issue.

Even when Ibrahimovic comes back, the Galaxy will play shorthanded for the next few weeks at least, possibly longer. They won't have the squad they planned until Alessandrini returns in September. By then, the Galaxy might be too far down in the table to turn it around.

The early season success fooled the rest of MLS. With enough games to suggest patterns, the Galaxy doesn't look like a threat. The ceiling seemed so high, even a month ago.