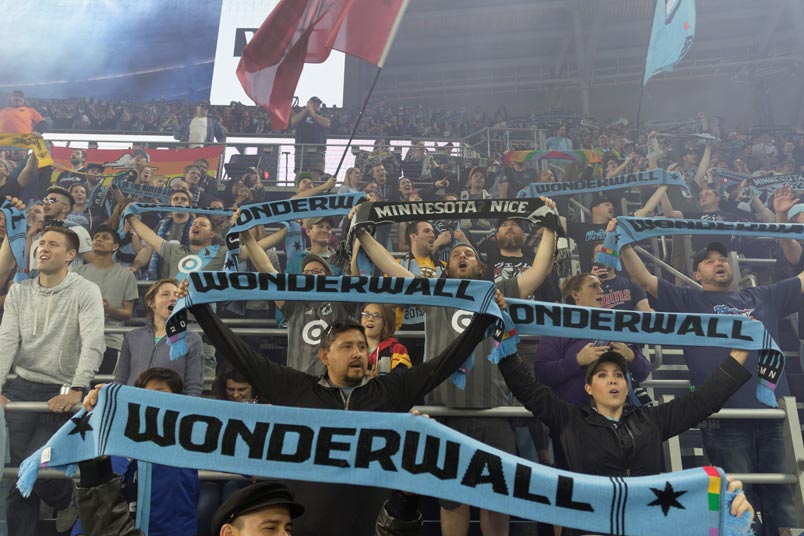 By Clemente Lisi – CHICAGO, IL (May 27, 2019) US Soccer Players – There are many geographic regions across the United States that can lay claim to being soccer’s home. The New York metropolitan area, with its immigrants and years of past success with the Cosmos, is one. California and Texas have a similar tradition. The Pacific Northwest and the Seattle-Portland rivalry, is another. The South, with the popularity of Atlanta United, has also emerged as another in recent years. Then where?

With Memorial Day unofficially ushering in the start of summer, there is yet another part of the country that will be the stage for the game this season. Midwestern cities Saint Paul, Cleveland, and Kansas City will host the USMNT during the first round of the Gold Cup. Chicago’s famed Soldier Field will host the tournament’s final, a game the US very much wants to be a part of come July 7.

Allianz Field, Saint Paul’s new stadium, has been a hotbed of excitement for Minnesota United. At the same time, expansion side FC Cincinnati has also been drawing large crowds in MLS this season. In fact, Cincinnati has averaged some 27,000 fans so far, third in the league behind Seattle and Atlanta. In Columbus, the Crew didn’t relocate after the end of last season, breathing new life into a city where some memorable US matches against Mexico happened over the past few World Cup Qualifying cycles. Sporting Kansas City continues to be one of the league’s better teams over the past few years. MLS has seen the impact and growth of Midwestern markets, with Detroit and St. Louis in the mix of cities looking to get an expansion team.

“The growth of the league is phenomenal,” Chicago Fire general manager Nelson Rodriguez said in 2016. “We will be excited to go into those markets because we know we’ll be met with fans who will be inclined to hate Chicago because Chicago is a great sports town. Because we carry with us the tradition of six trophies in our cabinet and we also carry with us the reputation of Chicago sports in general. I’m looking forward to it. I think it’s a wonderful thing.”

Detroit and St Louis have yet to get topflight teams, but talks continue. It’s easy to see that soccer is succeeding in the middle of the country. The reality is soccer hotbeds shift in this country depending on the decade. The 1950 US team featured players primarily from St. Louis and Philadelphia. The boom in youth soccer during the 1970s, triggered by the NASL, took the game out of the cities and primarily to the suburbs. AYSO became a thing and soccer prospered in states like California. Most MLS players come from California, followed by Texas.

The Midwest, an area that consists of 12 states and home to 65 million residents, has also given the USMNT some amazing players, including these standouts: Alexi Lalas (Michigan), Brian McBride (Illinois), DaMarcus Beasley (Indiana), Matt Besler (Kansas), Steve Ralston (Missouri), Brad Friedel (Ohio), and Jay DeMerit (Wisconsin). Third on the list of where MLS players hail? It’s a Midwestern state: Ohio.

The Midwest isn’t limited to American stars. The International Champions Cup will barnstorm through the country once again with two stops in this part of the country: Roma take on Chivas Guadalajara on July 16 to open the tournament at SeatGeek Stadium in Bridgeview, outside Chicago. On July 24, organizers scheduled Bayern Munich versus AC Milan at Arrowhead Stadium in Kansas City, looking to capitalize on the region’s German immigrant roots. An estimated five million Germans came to the United States in the 1800s alone. A majority of them moved to what became known as the “German triangle” between Missouri, Ohio, and Wisconsin.

Meanwhile, the chance for the USMNT to play in Cleveland will allow American soccer to showcase itself in a market that currently has no MLS presence. The June 22 game at FirstEnergy Stadium, home to the NFL’s Cleveland Browns, could draw upwards of 30,000 fans if the recent past in any gauge. In 2017, the US blanked Nicaragua 3-0 in Gold Cup group play before a healthy crowd of 27,934.

It will be a busy sports Saturday in Cleveland that day. The Indians will play the Detroit Tigers at 4:10pm at Progressive Field located just a mile away. The USMNT plays at 8pm. That’s not head-to-head but it’s close enough to ask the question about which game will have the bigger appeal in the market. Every game counts in a region that could very well become the next center of soccer in the United States.