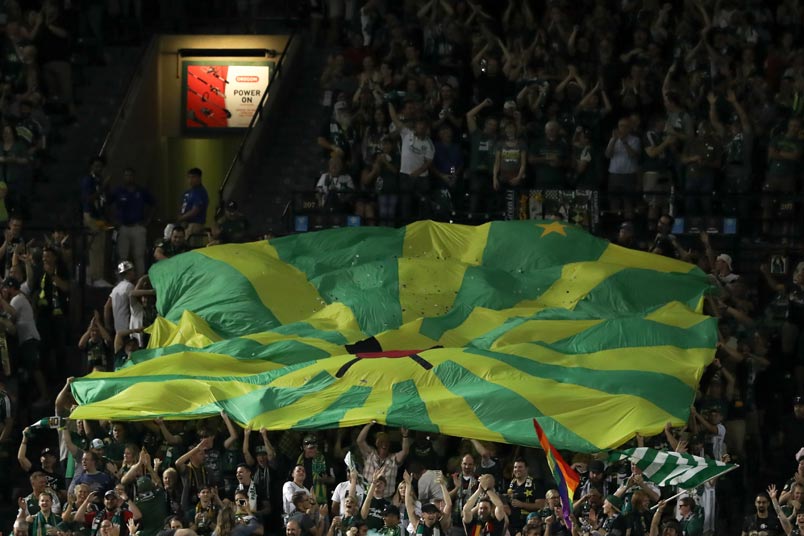 There’s nothing wrong with that, especially when the size of the club doesn’t really impact how competitive it can be. MLS provides opportunity, even when teams can’t spend dollar-for-dollar with the top spenders in the league. With the right combination of smart economics, home support, and luck, “medium” might not mean much of anything.

It's the intensity of the Timbers’ support making Portland one of the more pressurized environments in MLS, a fact that cuts both ways in the quest for championships. While the stadium will almost always be full, failing to challenge for trophies from year-to-year risks taking that support for granted and turning a strength of the club into something less.

In their bid to stay relevant, the Timbers are striking while the iron is hot. The club is adding 4,000 seats to their home venue, Providence Park, bringing capacity to 25,000. That construction is why Portland started the season with 12-straight road games, a painful stretch that pushed the team to the bottom of the Western Conference. Timbers leadership believes that short-term pain is worth it for long-term gain.

“Fans understand that if a club does well—in any sport—off the field, if their commercials endeavors and their business is healthy and robust, then the club will have the resources to spend on the roster and build a team that competes. That’s been our model,” said Timbers President of Business Mike Golub in an interview on SiriusXM. “We are in one of the smaller markets in Major League Soccer and yet we have way above average player payroll and the success we’ve had on the field is an accomplishment. The business success we’ve had here fuels the soccer investment.”

The timing of the Timbers’ stadium renovations is interesting because it comes as clubs like Atlanta, LAFC, and others are pushing the envelope on spending. Atlanta United set new attendance standards in MLS. If other clubs want to compete with Arthur Blank’s outfit, they’ll need to improve revenue.

Portland didn’t start planning to add seats to Providence Park after Atlanta arrived on the scene and reset expectations. The thought process goes all the way back to the club’s first season in the league.

Portland’s problem is one that MLS teams rarely face: Demand so high that there’s a pressing need to meet some of it with radical action. The biggest issue facing the plan to expand Providence Park was the constraint of location. A major part of why MLS expanded to Portland was the stadium.

"We began to explore possibilities as early as 2012. We began to consult with architects to see what was possible,” Golub explained. "It’s tricky because one of the wonderful characteristics of the stadium is that we’re nestled in the middle of the city. Expanding upon our existing is tricky because we have a very finite footprint. It took us a few years to arrive at the design we felt would work, where we could add a meaningful number of seats and perpetuate this really unique fan experience we have and do it in a way that is really functional."

In Portland, MLS had the expansion model it continues to push as the ideal. Whatever the magic elixir that made soccer so popular in the Rose City prior to Major League Soccer’s arrival, the sold-out games at an urban stadium (easily juxtaposed against the small crowds in places like Commerce City, Frisco, and Bridgeview) pointed the way forward for the burgeoning League.

It’s worth noting that Providence Park is just the latest version of a historic Portland sports venue that began as an athletics arena back in the 1920s. There aren’t many analogous situations elsewhere in the country. The building was almost waiting for its first division soccer makeover when 2011 arrived.

The building’s revival for soccer over the last decade and the work done to keep it current effectively make it a new venue. A new venue that wasn’t big enough anymore less than ten years into the Timbers’ MLS existence. That raises the question about the revenue generated by those extra seats. Will it go back into the product on the field? MLS teams are famously not profitable, so it wouldn’t be ridiculous to think that bringing in more fans is just about getting closer to even.

Perhaps the saving grace for anyone worried about the Timbers squeezing more money out of the stadium without a commensurate interest in putting that money back into the team is that MLS doesn’t really operate that way. Hand-wringing over profitability is largely misplaced because soccer and Ameican pro sports more generally exist on a cocktail of civic duty and improving franchise value.

“We are very fortunate in our case with the Timbers and Thorns to have an owner who is so eager to invest in the fan experience in the rosters in the players that represent the club and is less concerned - Merritt understands, and we understand, that in the end if we doing everything right and we take care of business on and off the field that the value is going to manifest in the value of the franchise,” Golub said. “We are building a club that is sustainable, we’re building a club that will succeed on the field. By doing all of those little things right, the value of the franchise will continue to grow.”

Atlanta's massive attendance numbers and spending makes them the brightest star in the MLS constellation at the moment. MLS is chasing that sort of success elsewhere, with an expansion policy that mixes the vestiges of MLS 1.0 with the flash of new stadiums.

It will take all kinds to keep MLS growing, however. It does the league no good to have its smaller market teams left behind. If the Timbers can maintain a balance that values not just business metrics, but the connection to the fans and success on the field, its position will speak more to the stability of MLS than even 50,000 fans in an NFL stadium.

“If this was a stock, if soccer was a stock, we’d be buying,” Golub said. “That’s effectively what we’re doing with this investment. You never know in sports. There are always things you can’t predict. But I think we’re positioning really, really solidly to be an incredibly successful business and to be a really successful team on the field.”