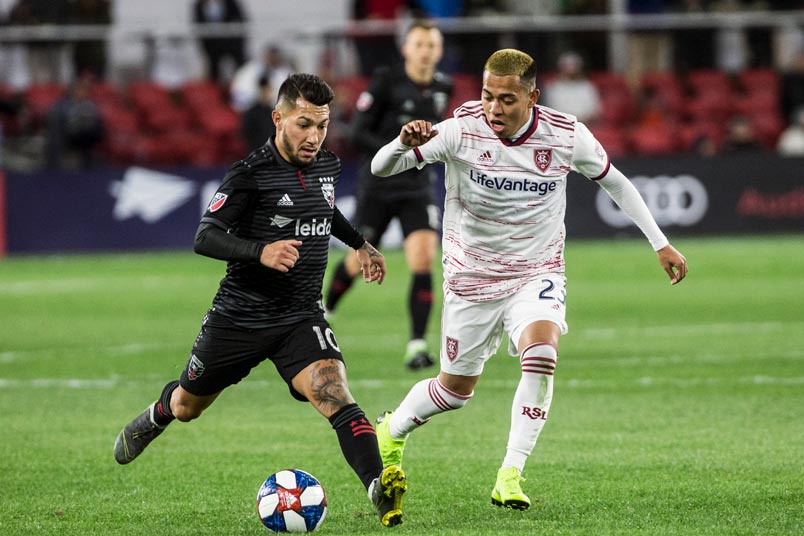 By Jason Davis – WASHINGTON, DC (May 22, 2019) US Soccer Players – Let’s get this bit out of the way first: After 11, 12, 13, or 14 games (Major League Soccer scheduling is a little messy), you are probably what your record says you are. First place teams are good, 4th-place teams aren’t too bad, and teams at the bottom of the conference standings are there for legitimate reasons. The potential to improve is higher for some clubs than for others, but few teams can claim they deserve better.

The topsy-turvy nature of MLS does mean that change is bound to come, however. A handful of teams are pulling out of poor starts. Namely, the New York Red Bulls and San Jose Earthquakes. Both are showing enough promise that it would not be a surprise to see them much higher up the table in just a month’s time.

The standings reflect reality, but they’re hardly predictive. Just because a team is in 7th-place now doesn’t mean they can’t make a charge for a better seed by the end of the year or even challenge for the MLS Cup title. With that in mind, let’s consider the words of Real Salt Lake midfielder Sebastian “Bofo” Saucedo, one of his team’s goalscorers in a comprehensive 3-0 win over Toronto FC on Saturday.

“I think you guys saw it. There was a sequence where me, [Damir Kreilach], Albert [Rusnak], the guys, everyone’s tuned in, everyone’s knocking from one side to the other side,” he said. “We’re capable of doing that. I don’t think those top teams in the league think we’re capable of doing that, but you know what? We knocked out LAFC last year, and [Toronto aren’t] defending champs but two years ago they were champions and we got a result. So why can’t we do it? Why can’t we be the Western Conference champions? Why can’t we be the MLS Cup champions? We have it in us. At the end of the day, it’s 11-v-11 out there. Doesn’t matter who it is.”

Some of those words are the bluster of a confident athlete coming off the thrill of a victory. Players routinely talk up their chances and highlight underdog status as a motivational tool. In those ways, Saucedo’s words are practically boilerplate. In other ways, they point to the still extant reality of MLS: Anybody can win, and perhaps even more so in 2019.

Real Salt Lake is just one of a half dozen teams that can claim to be capable of winning a championship without it seeming ludicrous. You don’t have to be sitting at the top of the standings in May to dream about MLS Cup. Showing even a glimmer of effective, winning soccer is enough.

With seven teams making the MLS Cup playoffs from each conference this season, the only prerequisite for hope is not falling too far behind the pack. It’s much too early for even that to matter. So while it’s tempting to throw a handful of teams into the “no hope” pile, nobody should be writing off the vast majority of clubs.

RSL specifically is an interesting case. The win over Toronto is a particularly difficult piece of evidence towards the idea that RSL can contend. Saucedo isn’t wrong that his team strung passes together and looked fluid and effective against Toronto, but an assessment based on those moments ignores Toronto’s complicity. If TFC’s defense played poorly, that would undermine the notion that RSL’s showing means much of anything.

The soft middle of MLS is replete with teams that can play good soccer on their day. RSL is one of them. We can probably add to the list clubs like Minnesota, FC Dallas, Chicago, Columbus, and San Jose.

The Crew can’t score goals at the moment and have slipped down the list of presumed contenders. There appears to be enough talent to at least get Columbus into the playoffs. FC Dallas is young and missing a handful of important players due to international duty. They’ve also shown flashes of being very good so far this season. The Loons aren’t world-beaters and often squeak by even at home. A settled first choice lineup that includes Darwin Quintero, Angelo Rodriguez, Jan Gregus, and Osvaldo Alonso is formidable. Chicago is a good finisher away from being dangerous. San Jose is slowly adapting to Matias Almeyda’s philosophy and went from a disaster to a fun, goal-happy team in about a month.

It’s easy to dismiss all of them as MLS Cup contenders, in part because the last few seasons delivered champions who were dominant in the regular season. The success of Toronto FC and Atlanta United in 2017 and 2018 respectively tilted our understanding of this league.

Toronto won the Supporters’ Shield and the MLS Cup as the dominant side in 2017. Atlanta was historically great on their way to a championship. Those two results are not typical for MLS. Toronto was only the seventh team to lift the MLS Cup after also being the regular season’s best team and only the third to do it in the Designated Player-era.

The baked in randomness of one-off knockout games in all playoff rounds this season essentially guarantees surprises come playoff time. Those surprises might even conspire to give us a champion who wasn’t great over 34 games of the regular season. Everything LAFC is doing now is remarkable. If they stay on their current pace they’ll not only break records, they’ll be the obvious favorite to win the championship.

Saucedo is right, but maybe for different reasons than he imagines. Real Salt Lake’s potential makes them a candidate to win a championship in the same way ten other MLS teams are candidates to win a championship. What RSL did against Toronto is more important as a mechanism for boosting the team’s confidence and spurring them on to qualify for the postseason than it is as an indicator of how good they are relative to the rest of the league.

LAFC is the best team in MLS. Even LAFC’s early supremacy is less informative about the ultimate results of the season than we want it to be. We’re quick to forget history and over-dependent on current form in our attempts to prognosticate what will happen come November.

The numbers can guide us. That’s bad news for Saucedo since RSL is in the bottom quarter of the league in expected goals and is over-performing their numbers so far this season. However, those are always subject to change via tactical tweaks and summer acquisitions. None of what’s happening now really matters, except as a means for slotting teams into playoff seeds.

Saucedo asks why Real Salt Lake can’t be MLS Cup champions. Right now, there’s no good answer to the questions. Can RSL win the title? Yes. Could they also flame out of the first round of the playoffs, or worse, miss the playoffs altogether? Also yes.

The chances are Real Salt Lake won’t be the champions of Major League Soccer in 2019. That doesn’t mean Saucedo is wrong. At least not yet.