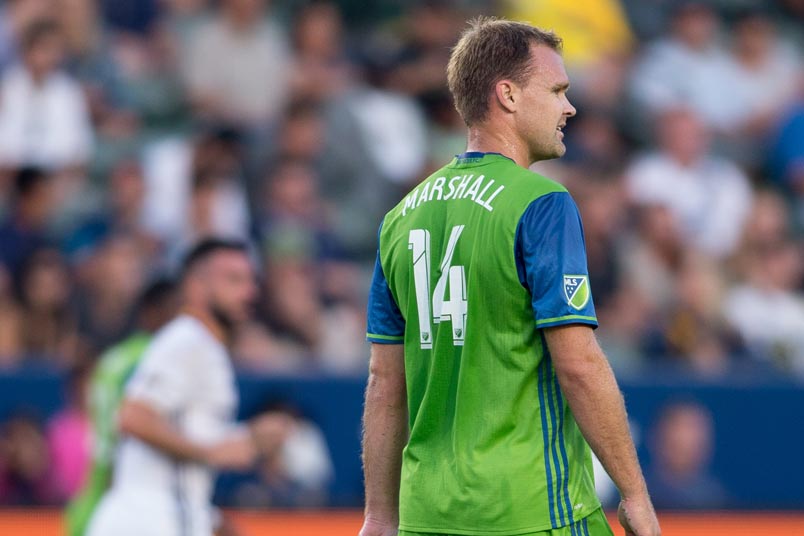 By Jason Davis – WASHINGTON, DC (May 24, 2019) US Soccer Players – Chad Marshall’s decision to retire from the sport of soccer at the age of 34, in the middle of the Major League Soccer season, couldn’t have been an easy one. No player wants to leave his team in the lurch, looking for cover while simultaneously fighting for points towards a championship goal.

Marshall’s status as a team leader makes his departure even more poignant. Experience breeds esteem, and Marshall had plenty of that. The 409 MLS games he played in his career puts the defender second all-time among non-goalkeepers in that category and speaks to his remarkable consistency. It was rare that Marshall wasn’t on the field in any given MLS week and almost equally as rare when he played poorly.

In 15-plus seasons of play between two teams, Marshall anchored the back line in Columbus and then Seattle with a steady quality that earned him three Defender of the Year Awards and recognition among his peers as one of the best players in MLS.

The use of the word “players” without qualifiers is necessary because defenders are so often shunted into a separate category when the question of the league’s best comes up. Goalscorers and goalscorer-adjacent players are always more likely to get recognized for their quality. It makes sense, sure. It’s also why it was easy to take Chad Marshall for granted.

It was easy to acknowledge his status as a starter at centerback for each of the teams he played for, then quickly move on to other parts of the field. Marshall was even overshadowed by another universally recognized “underrated” player while in Seattle, Osvaldo Alonso. Year-to-year while the pair manned the spine of the Sounders, Alonso was consistently mentioned as an underrated player in part because of the position he played while Marshall somehow remained under-appreciated in part because of his.

One of the quirks of MLS history is that five years ago seems like the distant past and 10 years ago seems like prehistory. Most will remember Marshall as a Sounder because he played his final seven seasons with the club and recency bias is strong, but he made his MLS name in Columbus.

As a member of the Crew, Marshall not only helped the club win the Supporters’ Shield and MLS Cup double in 2008, he won back-to-back Defender of the Year Awards in 2008 and 2009. He’s one of two players to achieve that feat. He became the only three-time winner in Seattle in 2014. It’s also worth noting that Marshall finished runner-up for Defender of the Year last season. He was part of the MLS Best XI in 2008, 2009, 2014, and 2018.

Marshall was a defender who thrived in two different eras of MLS and never fell behind the curve when the league advanced on the back of TAM contracts and an influx of foreign players. He was also quite obviously underpaid. There might not be a better metric for how underappreciated his work was than his salary.

The MLS Players Association salary disclosure showed Marshall making $341,000 in total compensation in 2018. Even considering his age, that number falls well short of his value on the field. Defenders, in general, are underpaid relative to their peers higher up the field. So while Marshall is not unusual among centerbacks at his salary, his resume suggests he should have been making much more. The Sounders always had the luxury of Marshall’s presence and were able to focus elsewhere when looking for new players.

Seattle ran through several first-choice centerback pairings during Marshall’s time with the club, but the former Stanford Cardinal was always the constant. Through the 2018 season and into 2019, Seattle pushed former starter Roman Torres into a part-time role and installed Kim Kee-Hee alongside Marshall. The veteran hardly missed a beat.

It’s Marshall the Sounders now have to replace. They appear to have already done so. At the time of the deadline day signing of Xavier Arreaga, it wasn’t certain that the Ecuadorian centerback would supplant Marshall. Despite lingering injury issues, the expectation was that Marshall would be back in the lineup in short order.

Arreaga’s DP status (more a quirk of the salary budget than an indication of Arreaga’s status as a player) implied a starting role. An imagined pairing of Marshall and Arreaga was a better bet than any other combination. Now, Arreaga will need to create a relationship with Kim and Torres as the Sounders navigate the balance of the season.

International call-ups will play a significant role in who is available and when complicating matters for head coach Brian Schmetzer. Arreaga will likely head to Copa America, which means that despite arriving on Thursday in Seattle close to game fitness, he may not get a chance to make his mark for more than a month.

There’s more to Marshall departure from the Sounders than just the gargantuan task of replacing his steady play in the starting lineup. Schmetzer’s team will also have to overcome the psychological blow of losing a player as well-respected and loved as Marshall.

The many pieces popping up on Marshall all mention his jovial locker room demeanor among his other impressive attributes. He was the connective tissue of the Sounders during his time with the club, looming large not just because of his physical stature, but because he put everyone around him at ease.

Soccer seasons are long and demanding and can sometimes fall apart through mental failure. Players who can lighten that burden, with jokes or backslaps, are worth more than just their contributions on the field. Since his arrival ahead of the 2014 season, the Sounders haven’t played without Marshall around. Injured players are still part of the team. Marshall’s retirement means he won’t be there at all.

Schmetzer is a good coach and will be on top of the dynamics in his team after Marshall’s sudden announcement. The Sounders will probably be fine. We already know they have enough talent to make the playoffs. The loss of a figure like Marshall might cause a hiccup, but they’ve already been working with his absence from the field for the last three weeks.

A lot of how the Sounders’ season ultimately finishes will rest on Arreaga’s ability to integrate and either Kim or Torres rising to the responsibility of being the veteran leader at the back.

It’s impossible to say if the circumstances were different and the Sounders desperately needed the cap relief, but the club does not intend to seek relief through the rules for the remainder of Marshall’s salary in 2019. Per reporting by Sounder at Heart, doing so would mean not paying Marshall the remainder of his salary for 2019.

The respect Marshall engendered during his time with the team ensures the Sounders have no interest in such a thing. He deserves that salary even as he’ll never play another minute for the club.

Marshall also deserves more than that. Not just monetarily, but in the form of the type of post-career honors reserved for the best the league has ever seen at any position. No centerback in MLS history did it for as long and at as high a level as Chad Marshall.