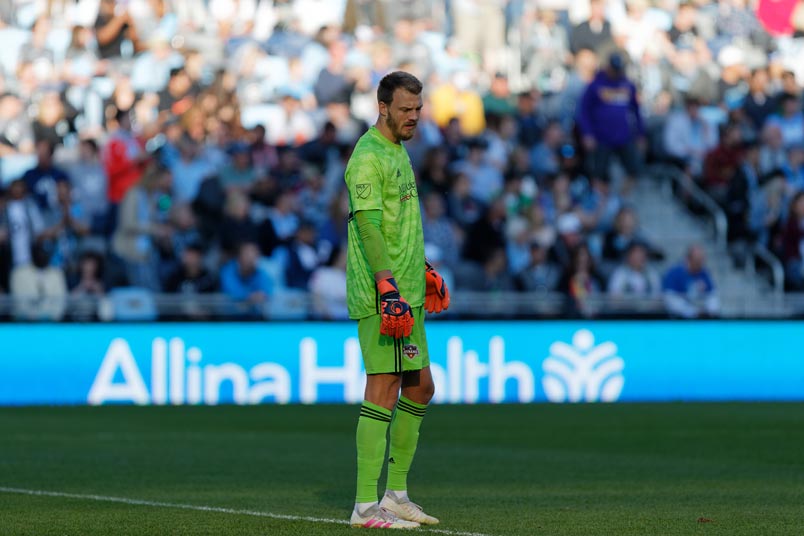 Week 13 resumed with two games on Friday night. In Orlando, Jonathan Dos Santos scored the game’s only goal in the LA Galaxy’s 1-0 win over City. Galaxy goalkeeper David Bingham saved a penalty in the 39th minute.

“I have a very happy team in there for one reason,” Real Salt Lake coach Mike Petke said. “We deserved that win. 100 percent. There have been games over the last couple years that we’ve won late that you could argue, we weren’t the better team. There’s no relief in there. In that goal, there’s justification. And the guys are happy and I mean, if we’re going to win the game two to one I’d much rather win it like that, for the organization and for the fans. It was an exciting ending. It was a very big game for this.”

LAFC beat Montreal 4-2 at home. Christian Ramirez put LA up in the 7th minute with Carlos Vela doubling the lead in the 28th. Latif Blessing made it 3-0 in the 31st with Tristan Blackmon scoring in the 55th. An own-goal made it 4-1 in the 70th and Montreal’s Saphir Taider converted a penalty in the 84th minute.

On Saturday, Chicago and NYCFC drew 1-1 in Bridgeview. CJ Sapong scored for the Fire in the 28th minute with Alexandru Mitrita equalizing in the 40th.

“Obviously, it’s no secret we’ve been struggling to execute those chances, Sapong said. “I think also on the other side of the ball we want to preserve the result when we get it so a lot of things that we’re familiar with and now there’s really nothing else to say about it except we got to do better. I think everybody knows that.”

Vancouver beat FC Dallas 2-1 at BC Place. Ali Adnan put the Whitecaps up in the 30th with Lucas Venuto doubling the lead in the 40th. Dominique Badji pulled a goal back in the 85th.

New England and DC drew 1-1. The Revs went a man down in the 56th with a red card to Matt Turner for denying an obvious goal scoring opportunity. Juan Agudelo scored for New England in the 61st. Wayne Rooney equalized from the penalty spot in the 56th.

“I think we were deserving of the three points,” Agudelo said. “We scored a goal a man down. We defended very good against a very strong DC side. Unfortunately, we got a point instead of three.”

Portland beat Philadelphia 3-1 on the road. Brian Fernandez scored in the 31st and 36th. Kacper Przybylko pulled a goal back for the Union in the 47th. Diego Valeri scored Philadelphia’s third goal in the 87th minute.

“I think the past 6-7 games, the team just changed gears,” Timbers coach Giovanni Savarese said. “We have been just facing every team in a different way, the quality has been really good. I think once we go into the field with a good fight, we were able to achieve good things.”

The Red Bulls shutout FC Cincinnati 2-0 at Nippert Stadium. Alejandro Gamarra put New York up in the 78th with Omir Fernandez scoring a minute into stoppage time. Luis Robles kelt the clean sheet with four saves. The Red Bulls scored with both of their shots on goal.

Minnesota shutout Houston 1-0 at home. Romain Metanire scored in the 20th and Vito Mannone made three saves to keep the clean sheet.

“Just so proud of the guys,” Colorado interim coach Conor Casey said. “Great performance tonight, high energy, incredible atmosphere in the stadium, I think it was almost a full house, it certainly felt like one. They cheered until the very last minute and came through in the end. The guys showed a lot of determination tonight.”

On Sunday, Sporting KC beat Seattle 3-2 at home. Johnny Russell scored for Sporting in the 29th and a minute into stoppage time. Raul Ruidaz pulled a goal back in the 63rd with Russell scoring again in the 68th. Kelvin Leerdam scored for Seattle in the 71st minute.

“It was a deserving three points first of all,” Sporting KC coach Peter Vermes said. “We felt the same way last week. Last week hit us deep in the gut. We talked about it all week that we know that we deserved the three points but we didn’t get it done. We needed to find a way. Seattle is a good team. They are on a good roll at the moment. It was big for us to be able to do this.”

Week 13 ended in Toronto with San Jose winning 2-1 on the road. Richie Laryea put Toronto up in the 28th. Chris Wondolowski equalized in the 37th and scored San Jose’s winner in the 81st.