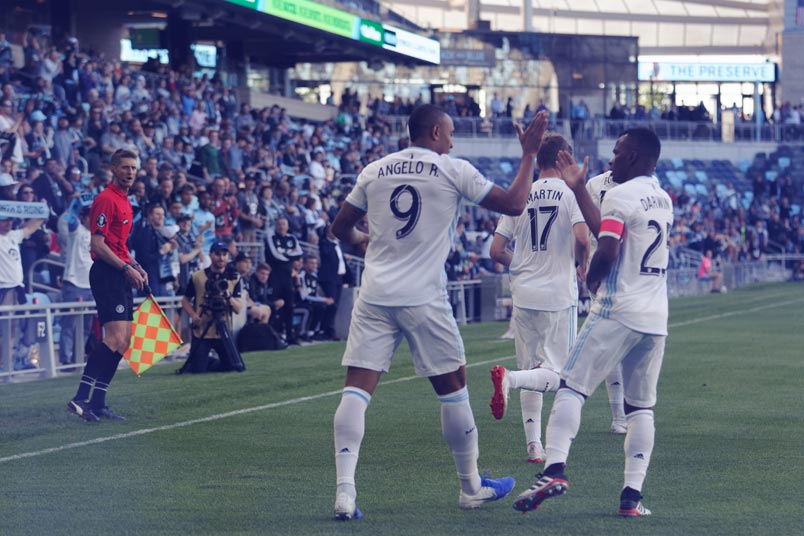 More MLS teams exited the US Open Cup in the fourth round. Wednesday's games started with NYCFC shutting out NCFC 4-0 at Belson Stadium. An own-goal opened the scoring in the 25th minute with Jesus Medina doubling the lead in first-half stoppage time. Keaton Parks scored in the 52nd and 76th minutes. NYCFC goalkeeper Brad Stover kept the clean sheet with seven saves.

DC United came back to knock out Philadelphia 2-1 at home. With the game tied 0-0 in regulation, Anthony Fontana put the Union up in the 113th. Wayne Rooney assisted on Chris McCann's goal in the 118th and converted a penalty in the 120th.

FC Cincinnati beat Louisville City 2-1 at home. Fanendo Adi gave Cincinnati the lea in the 23rd with Luck Mkosana equalizing in the 30th. That 1-1 scor held through regulation with Kekuta Manneh scoring Cincinnati's winner in the 103rd minute.

Minnesota beat Sporting KC 4-1 at home. United took the lead through Angelo Rodriguez in the 2nd minute with Gerso equalizing in the 27th. Ethan Finlay put Sporting up for good in the 47th with Darwin Quintero adding goals in the 55th and 67th minutes.

"We’ve always been a team that’s been very, very good defensively," Sporting coach Peter Vermes said. "At the moment we’re not playing defensively at a level to give ourselves a real chance in the game. You can’t give up a goal to start two minutes into the game and two minutes into the second half. It’s demoralizing for the team. So, I don’t know what else to tell you. That’s just really hard to be constantly chasing again."

FC Dallas shutout OKC Energy 4-0 at home. Matt hedges opened the scoring in the 11th minute with Michael Barrios doubling the lead in the 43rd. Dominuqe Badji scored in the 52nd and Reto Ziegler converted a 90th minute penalty. Dallas goalkeeper Kimmy Maurer didn't have to make a save to keep the clean sheet.

Orlando beat Memphis 901 3-1 on the road. Sacha Kljestan converted a penalty in the 38th to put City up with Elliot Collier equalizing in the 50th. Kljestan scored again in the 55th with Robin Jansson extending the lead in the 71st.

"I’m going to start by saying I’m proud of the team," Colorado interim coach Conor Casey said. "Good effort, really stuck together. We’re thirty seconds away from closing it out and unfortunately, we are unable to do that. We go down a man which obviously made it very difficult for the guys, but in terms of their application and their discipline, I was very happy with the group tonight. Obviously the result isn’t what we wanted, but there were still some very good performances out there from us tonight."

The LA Galaxy shutout Orange County 3-0 at home. Efrain Alvarez scored in the 55th and 61st minutes with Emil Cuello adding a goal in the 90th. David Bingham made two saves to keep the clean sheet.

Portland beat Seattle 2-1 away. Brian Fagundez put the Timbers up in the 6th minute with Victor Rodriguez equalizing in the 44th. Fagundez scored again in the 50th minute.

Atlanta's game at Charleston that couldn't go ahead due to field conditions is now scheduled for Thursday as a closed door game at Fifth Third Bank Stadium in Kennesaw, GA. US Soccer made the decision due to the lack of an alternative site in Charleston.

The Premier League released the 2019-20 schedule. FanSided's Graham Ruthven looks at what's next for the Netherlands after making the Nations League final. The Guardian's Jonathan Wilson looks at Argentina's issues in the run-up to the 2019 Copa America.