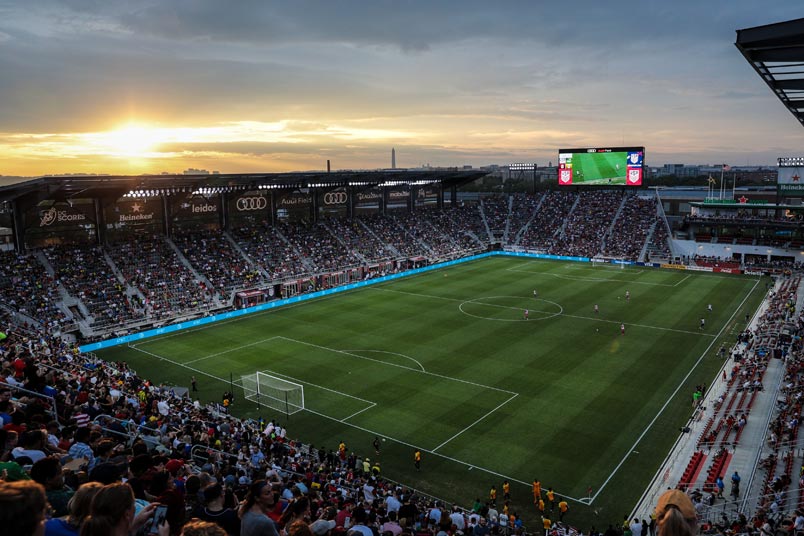 By Charles Boehm – WASHINGTON, DC (Jun 5, 2019) US Soccer Players – A “Plan B” formation, a bevy of new faces, and some understandable jitters on the eve of the Gold Cup roster drop were key factors for the USMNT in a 1-0 loss to Jamaica at Audi Field on Wednesday night. Fans are unaccustomed to seeing a result of that nature against the Reggae Boyz, who have now just won twice against the USMNT on US soil in 17 all-time matchups.

Mounting a deep run at the Gold Cup remains the main priority for coach Gregg Berhalter. There’s also the big picture of building the program in the shape and style of his front-foot playing philosophy. So instead of his typical 4-2-3-1 formation, he rolled out a less-familiar 3-4-2-1. He also gave minutes to several new and long-absent faces, mindful of the risks that came with that.

“It was really something to learn from. There were some positives,” said Berhalter postgame. “I think one of the objectives of this first camp was to play an alternate formation and so we achieved that. I think there’s tweaks we can make to that formation to make it better, make it function better. But overall that was positive. And the negative, we lacked speed, we lacked aggression in the final third.”

With familiar faces Omar Gonzalez, Matt Miazga, and Tim Ream anchoring the back line, Paul Arriola and Antonee Robinson were tasked as wingbacks. Wil Trapp and debutant Jackson Yueill worked in central midfield. Ahead of them, Djordje Mihailovic and Cristian Roldan were asked to work as dual #10s, seeking space between the lines to unlock an organized Jamaican defense.

“We tried something different, it’s preparatory for the tournament, you have new guys in the lineup as well. So that continuity is always going to be a little bit lacking but it’s not an excuse,” said Trapp, who took responsibility for his role in the long-range game-winner scored by Shamar Nicholson in the 60th minute. “I think we had some decent things in the first-half in terms of finding guys in good spots and creating decent chances. But the tempo of it, the intensity of it could’ve been better.”

Tactically, it was an intriguing concept. Only with MLS-based players arriving after weekend club action, there was little time to hone it.

“We had one day to train and to practice it, and obviously from the looks of things everybody struggled to get it going. We worked really hard as a team but just on the day we weren’t that good,” said Mihailovic. “You saw the lack of speed in the ball movement and the rotations, it was pretty evident… we’re going to have games like this, we’ve got to move on to the next one.”

On the one hand, Berhalter and his staff had to make final evaluations and hard decisions with their Gold Cup roster due. On the other, they sought to reward the hard work of those who’d arrived in Annapolis, Maryland at the start of last week for the combined preparation camp with a group of Under-23 players.

“It’s never nice for it to come down to one game or something like that, so I felt for the guys,” said Berhalter, acknowledging the challenge he’d handed to his squad given the imminent cuts.

Said Mihailovic: “You always get the little nerves before a roster deadline comes out, especially when it’s on the day of the game, you feel that. But as a pro you have to deal with that and just live with it.”

Full USMNT debuts were handed out to Yueill and Duane Holmes. Miazga wore the captain’s armband for the first time. After seeing limited action for Werder Bremen in recent months, Josh Sargent got to go the full 90, with a foot injury to Gyasi Zardes also a factor. Joe Gyau returned with his first US match action in some five years, and in his hometown, no less, with what he estimated at upwards of 100 friends and family cheering him on.

Beyond the frustration, there was also a nod of respect to Jamaica, who have clearly made strides in recent years.

The old Caribbean stereotypes of athleticism and physicality paired with a tendency towards mental breakdowns look dead and buried with longtime coach Theodore “Tappa” Whitmore’s side. The Reggae Boyz weathered early pressure, kept the US in front of them most of the night, and looked comfortable with their one-v-one battles in key spaces out wide. It hinted at the potential for a fierce clash in the weeks ahead should both these sides advance into the Gold Cup knockout stages as expected.

Aware of high expectations and limited patience at this juncture in the program’s history, Berhalter asked USMNT fans to, in essence, trust the methodical process he is overseeing.

“The guys tried, I think we gave a decent effort. We didn’t play well, and you’re going to have nights where you don’t play well,” he said. “I’m not sure it should be that volatile that you turn against a team after one poor performance. There’s going to be more, especially as time goes on – there’ll be more poor performances when I’m coach, I guarantee you that. And that’s part of it. But are the guys bought in? Are they working hard? Are we executing the type of soccer we want to execute? We’re getting there.”