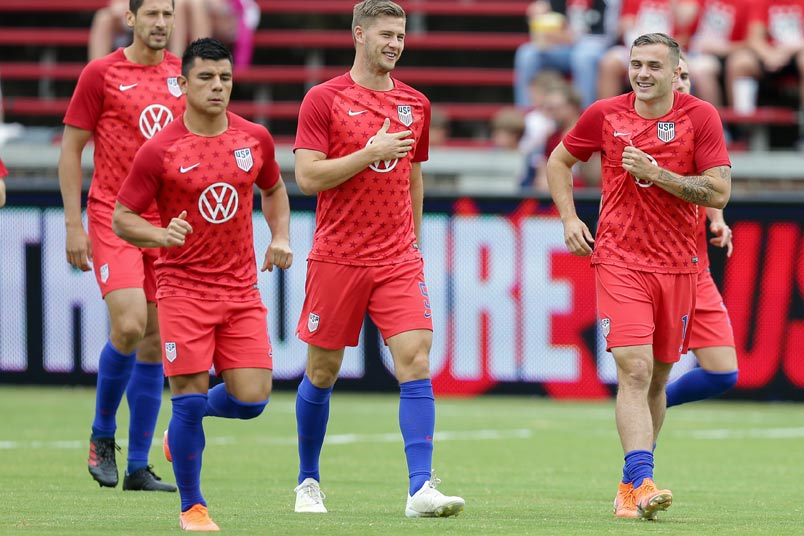 By Clemente Lisi – NEW YORK, NY (June 10, 2019) US Soccer Players – MLS teams have been here before. It happens every year in late spring/early summer whenever a major international tournament is on the schedule. MLS takes a break, but even then there are player absences that can cost teams in the short and long term.

Missing players due to international duty means MLS coaches will need to reformulate tactics and tinker with starting lineups to accommodate the FIFA-sanctioned dates. In a league where teams often lack depth, this period means having to get creative and give players, often younger ones, more minutes.

As MLS increasingly signs players from around the world, the risk of losing them during the Gold Cup or other continental tournaments increases each year. Seventy-eight MLS-based players made preliminary rosters with the US first overall with 24, followed by Canada at 18 and Mexico with three. In the end, a record 59 players ended up on final rosters. That breaks the record of 50 in 2015. Throw in the Under-20 World Cup, European Championship Qualifying, Copa America, and Africa Cup of Nations and the total balloons to 103 players from 35 countries.

Closer to home, the Gold Cup kicks off with a doubleheader on June 15 at the Rose Bowl. The USMNT play their first match three days later at Allianz Field in Saint Paul against Guyana. Here are the six MLS teams that will need to adapt over the course of the next month while the international tournaments are underway:

An expansion season can be difficult by any measure. Throw in the absence of potentially six players for a club rooted in last place in the Eastern Conference and the season can really go into a tailspin over the next few weeks. In terms of the Gold Cup, the team is without midfielder Allan Cruz (Costa Rica), striker Darren Mattocks (Jamaica), and defenders Alvas Powell (Jamaica) and Kendall Waston (Costa Rica).

The defeats, and now the loss of several key players, have done little to dampen the spirits of the Nippert Stadium faithful. Nonetheless, any chance of a resurgence seems out of the question with Waston gone. Also missing is Mattocks, one of the league’s biggest offensive weapons the past few years. While true that in 13 games Mattocks only started in nine of them scoring twice, he is capable of getting hot. In his absence, strikers Kekuta Manneh and Fanendo Adi will need to raise their game.

The second-year team is dominating the Western Conference. That cushion at the top of the table will allow Bob Bradley’s team some margin for error in the coming weeks. The team will be missing as many as six players as a result of the Gold Cup: goalkeeper Tyler Miller (USMNT), defenders Walker Zimmerman (USMNT) and Dejan Jakovic (Canada), and midfielders Mark-Anthony Kaye (Canada) and Peter-Lee Vassell (Jamaica).

LAFC will benefit immensely from Carlos Vela not making Mexico’s roster. Univision reported last month that Vela did not want to play for El Tri this summer, something coach Gerardo Martino is still weighing. Keeping Diego Rossi, a native of Uruguay, and US striker Christian Ramirez is also a plus as LAFC looks to limit the impact of international duty absences.

The Galaxy, meanwhile, are also missing several notable players. Defender Rolf Feltscher will be on Copa America duty with Venezuela while midfielder Jonathan dos Santos (Mexico) and defender Giancarlo Gonzalez (Costa Rica) are also gone for now. Those absences could last longer with the expectation that both nations will go on deep runs at the Gold Cup.

The absence of dos Santos will be the biggest concern, although a hip injury has prevented him from playing at his best. In his absence, Zlatan Ibrahimovic will likely pair up with Mexican midfielder Ariel Untuna, who was not named to the Gold Cup roster, or veteran Chris Pontius.

With striker Jozy Altidore with the USMNT and Ayo Akinola injured, TFC will have to rely on Terrence Boyd for goals over the next few weeks. In all, Toronto will be missing six players, including US defender Omar Gonzalez and midfielder Michael Bradley as well as the Canadian trio of defender Ashtone Morgan and midfielders Noble Okello and Jonathan Osorio.

Altidore has been prolific, scoring five goals in six starts, this season. Boyd will see increased playing time alongside Yordy Reyna, who did not get called up by Peru for the Copa America. Bradley’s absence is an obvious concern, while Gonzalez only recently signed with TFC and has yet to play for the Canadian club. TFC fans have to wait to see the USMNT trio together in Toronto.

The Red Bulls, after a slow start this spring, are beginning to play at the preseason potential expected from them. For a team that suffered some defensive lapses early on, missing four players, three of them defenders, certainly won’t help. The team will be missing defenders Kemar Lawrence (Jamaica), Michael Murillo (Panama), and Aaron Long (USMNT). Striker Derrick Etienne Jr (Haiti) is also on Gold Cup duty. Missing Long and Lawrence in the back is particularly worrying.

RBNY has depth and a strong youth system, two things that will help them cope with these absences. Kyle Duncan, for example, is a budding right back who will gain valuable experience over the course of the next few weeks. It's not new for the Red Bulls to lose players to international duty, and they've been able to withstand these absences in the past.

Nine players are missing from Seattle’s roster, the most of any team in the league. Working in the team’s favor, however, is a group of Homegrown Players who can fill the void and also gain some valuable playing experience. Those missing players are USMNT midfielder Cristian Roldan and striker Jordan Morris, defender Jordy Delem (Martinique) and Roman Torres (Panama) for the Gold Cup. Also gone are defenders Brad Smith (Australia) and Xavier Arreaga (Ecuador) and midfielders Raul Ruidiaz (Peru) and Gustav Svensson (Sweden).

Offensive lynchpin Nicolas Lodeiro isn't with Uruguay, a bonus for Seattle during this stretch. Midfielder Handwalla Bwana, in only his second MLS season and the team’s 10th Homegrown signing, remains a promising midfielder. He’s likely to feature in the starting lineup the next few weeks. Also getting minutes will be another Homegrown Player in midfielder Danny Leyva. He already made team history last week after debuting against Montreal at age 16.