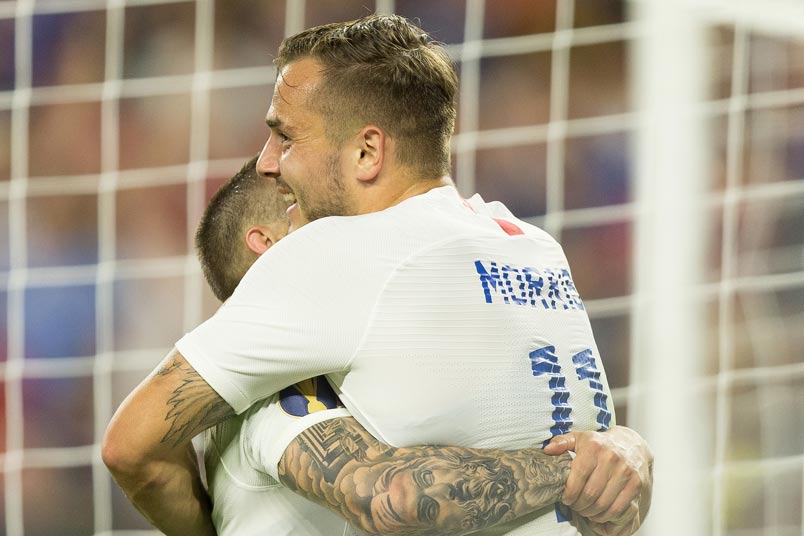 By Clemente Lisi – CLEVELAND, OH (June 24, 2019) US Soccer Players – The United States is firing on all cylinders at this Gold Cup following the 6-0 rout of Trinidad and Tobago. The USMNT has had several offensive weapons emerge at this tournament, and a few more coach Gregg Berhalter can still deploy as the Gold Cup progresses.

One of them is Seattle Sounders striker Jordan Morris. On a roster that has plenty of offensive depth, the 24-year-old Morris has had to fight for a spot and minutes at this tournament. Undeterred, Morris had an assist on Christian Pulisic’s strike against T&T at FirstEnergy Stadium after coming in as a second-half sub. The victory helped the USMNT clinch a spot to the quarterfinals.

Not bad for a player who a year ago missed the entire season because of a torn ACL. Morris recently injured his hamstring, recovering just in time for the Gold Cup. He’s now back and stronger than ever. He’s not only happy about playing at the Gold Cup, he thrives on the competition in training and being back in the National Team fold.

We caught up with Morris ahead of the team’s final group-stage match on Wednesday against Panama in Kansas City, where he talked about being back from injury, playing with the National Team again, and his fondness for the Gold Cup.

How’s the hamstring you injured back in May playing with Seattle and update us on your overall fitness?

I’m feeling pretty good. Obviously, coming back from the hamstring, my goal was to get back here and get fit in whatever role I play. I go out and work hard every time. The hamstring is much better.

Like many players on this team, there is a desire to excel. How much do you love playing for the National Team?

Of course. It’s such an honor. Whether you’re on the field, on the bench, just being part of this team is something I’ll never take for granted. Every time I listen to the National Anthem before the game it gives me chills. Just to be a part of this tournament is something super special. For me, it’s just amazing.

There was a lot of talk before the T&T game that the U.S. was out for revenge for losing to them and not qualifying for the 2018 World Cup. Was that discussed before the game and was that what motivated the team to such a lopsided win?

I think we had a different message. It was not what it was about for us. Gregg told us before the game it was about getting to the next round and they were standing in our way. That was the only thing we were thinking about. For us, there was no message of revenge or anything like that. It was all about going out, playing our game, and getting three points.

You had an excellent Gold Cup two years ago, where the U.S. won it all and you were a big part of that success. After this big win, how far can the U.S. go at this Gold Cup?

I think we are going to be disappointed if we don’t come away with the trophy. I think we have the quality to do that and I think that’s the goal of every player here to win the tournament. We got off to a good start. We still have a long ways to go, but we’re going to keep pushing as a team to try and get that ultimate goal.

What teams do you fear at this Gold Cup and has the past shown you can’t underestimate any team at this tournament?

Every team here is going to present their own unique challenges. I think our own focus is the next game against Panama and try to win the group, knowing that’s going to be a tough game. We’ll think about the other teams later.

Have you been watching the Women’s World Cup and what are your thoughts about another potential World Cup title for the United States and both National Teams playing for a title come July 7?

It’s a very special time and obviously a special summer with both teams playing for a trophy. The women have been doing great and it has been so fun to watch them be so dominant. Obviously, we wish them all the best and hope we can both be in a final on the same day. That would be pretty special for us and for them. We wish them all the best.