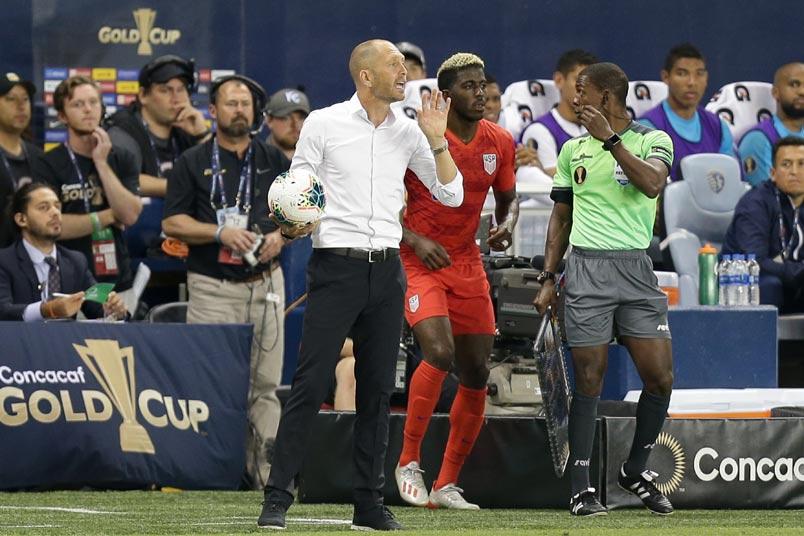 By Charles Boehm – WASHINGTON, DC (Jun 27, 2019) US Soccer Players – On Tuesday, one day before the USMNT wrapped up Gold Cup group play with a 1-0 victory over Panama in Kansas City, The Athletic published a Gregg Berhalter feature based off a one-on-one conversation with writer Paul Tenorio. In it, Berhalter spoke frankly about the pressure and scrutiny around his job even in the early stages of his tenure.

“We’re trying to remain balanced and focused on the short-term and the long-term, which is hard to do,” Berhalter said. “And we also understand there are going to be decisions we make that other people don’t like. We have to be willing to explain those decisions.”

It’s the nature of sports fans to live in the moment. Every game, even the forgettable ones, is an immediate and visceral experience. In some ways, it’s diametrical to how and what Berhalter and his staff process what unfolds over the 90-plus minutes.

That might leave some supporters cold at times. After Wednesday’s win showed an encouraging degree of forward progress from that loss exactly three weeks prior, it may be easier for them to discern at least some outline of the process Berhalter is driving.

Here’s three angles to ponder as the USMNT pivot towards a quarterfinal date with tournament Cinderellas Curacao in Philadelphia on Sunday.

The USMNT fielded a completely new starting XI from their first two Gold Cup matches. With advancement already assured and rest a factor in the compressed, travel-heavy timelines of tournament play, it was a logical move. According to Berhalter, it was even simpler than that.

“The decision to start 11 new players was an easy one, to be honest,” he said postgame. “We believe in the group. We believe in keeping the group together. We believe that everyone can contribute in this team and the team’s success. We wanted to show that.”

Overall it was not an unforgettable performance. Rust and perhaps a few nerves showed in some places. Different players, and different relationships among them led to a slow start and some tentativeness in the buildup, particularly against a Canaleros team content to sit back. The US controlled more than 60% of possession, yet ended the night with a modest two shots on target.

Given how a new-look lineup fared in the Jamaica friendly, digging out a win was a step forward. Top teams, including the best of USMNTs past, develop a knack for getting positive results in such situations. The Gold Cup title defense rolls on.

“In this tournament we have to use all 23 guys and we had a game plan going into it,” Cristian Roldan said. “[We] kept a shutout, kept them to one shot, zero corners, pretty happy with it. Defensively we were a little sloppy, maybe because we hadn’t played in a while. But in the end you grind out these games and you win the group.”

Games like this are test, opportunity, and classroom from those who haven’t seen as much action up to this point. It’s also a chance to cultivate competition for every minute. However the coaching staff might rate individual displays, it’s always a benefit to get a chance to contribute and show oneself.

The most talked-about area in this regard is probably the lone striker role. Jozy Altidore got the start and justified it with the game’s only goal, a resourceful overhead kick, as well as some encouraging work in other phases of play. With Altidore still gaining full match fitness after an injury layoff, he appears to be neck-and-neck with Gyasi Zardes, who scored three goals in the first two Gold Cup games, in the race for the starting job.

Here again, Berhalter & Co. aim to balance “now” and “later”. They’re carefully bringing along a veteran star who can offer something special when unencumbered by the litany of injuries that have dogged him over the years. Those complaining about the careful, cagey character of this match should not overlook Altidore’s euphoric reaction upon scoring his first USMNT goal since the fateful month of October 2017.

“It’s been a rough time waiting,” he told Goal.com’s Ives Galarcep postgame. “I’m just trying to earn an opportunity again, so to get out there, to score in these colors again, it means everything to me.”

Mixing and matching starters is inclusive and protects tired legs. It also provides a chemistry experiment, as different skill sets intermingle and collaborate. The fullback positions are a useful example.

This year, the right back spot has seen a hybrid pinched midfielder concept with Tyler Adams and Nick Lima. On Wednesday it was Reggie Cannon in a more orthodox endline-to-endline wide role. In contrast, Tim Ream has recently played the part of a stay-at-home left back with the measured passing and positional instincts of a center back. Against Panama Daniel Lovitz stepped in to offer a bit more attacking aggression.

Different personalities in these slots bring an interesting knock-on effect to the rest of the team. Which wide midfielders best dovetail with which fullbacks’ tendencies? How do opponents react, and where does that open up space in the push-pull of a high-level game? It all creates fresh data points for a program which has doubled down on the collection and consideration of such information under the new management.

The educational aspect continues in other contexts as well. At times on Wednesday, the USMNT was less than fluid in the buildup, giving the sense that players were thinking and not just doing. Berhalter has alluded to this as a natural step in the adaptation of a philosophy that asks them to process significant amounts of info in real time.

The key is displaying progression from game to game and camp to camp, especially in a tournament environment where gaining and maintaining momentum is a recipe for success. Sunday’s date with Curacao should be a manageable next step as the process continues with the additional facet of the knockout stages’ win-or-go-home mindset.

“We wanted to go out and be aggressive, be attacking and get behind them and create goal scoring opportunities,” said Berhalter. “But aside from that, especially when we scored, the guys can dig in, you see that they can keep fighting and that they can fight for each other, and that’s important and that goes a long way. The team spirit is really good right now, and it’s been fun to watch these guys develop.”