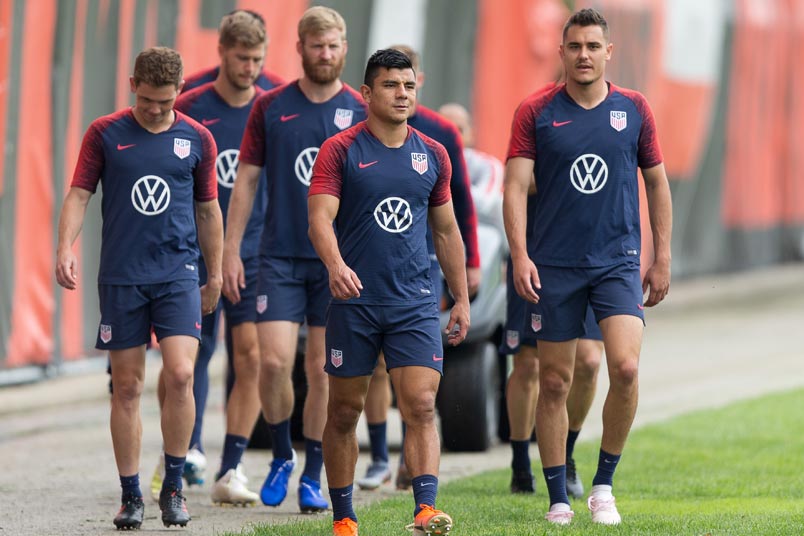 By Charles Boehm – WASHINGTON, DC (Jun 21, 2019) US Soccer Players – The USMNT began their Gold Cup run as expected, with a 4-0 win over Guyana in Minnesota on Tuesday. The result was a welcome feeling in the wake of this month’s two losses in warmup friendlies. In the circumstances, though, even a blowout scoreline could only mean so much. Postgame reactions reflected that.

“It’s a game that we should win and that we did win,” said captain Michael Bradley, who notched an assist on one of star newcomer Tyler Boyd’s two goals.

“The game was a decent starting point,” said head coach Gregg Berhalter. “Not much more than that.”

With tournament task #1 accomplished, the scene shifts to Cleveland, where Trinidad & Tobago is the opponent on Saturday. Here’s a few conversation points as the Yanks try to crank one notch closer to top gear.

Mainly roving the right wing but also roaming to good effect, Boyd earned the headlines with a man-of-the-match performance in just his second USMNT cap. Meanwhile, his opposite number Paul Arriola was probably the team’s next-most impactful attacker, notching a goal and an assist.

It’s no accident that the two wingers were so productive. Berhalter’s Columbus Crew SC teams generally rose and fell based on the contributions provided from those spots. His systems have relied on advanced flank players to not only stretch defenses and provide service into the box, but also drift inside to combine with teammates and/or threaten goal themselves.

It’s noteworthy that Arriola is one of just two players to have appeared in all seven of the USMNT’s 2019 matches thus far. He offers a combination of speed, vision, and energy that creates chances, shifts opponents, and opens up space for colleagues. Meanwhile Boyd’s comparable skill set – Berhalter spoke of “the verticality, the finishing, the work rate” – has helped his star rise quickly. In just a month’s time , he’s gone from a dual-national known mostly to hardcore USMNT watchers to starter. It’s also a sign of his impact that he’s taken over some freekick duties.

The longer-term challenge for Berhalter and his staff is making sure the player pool has a steady stream of talent to compete for minutes in these roles. Creative, goal-dangerous wingers are not traditionally an area of strength for the country’s development structures.

Another key position for Berhalter is centerback, the spot he manned for the USMNT in his own playing days. When the coach’s plan works like it’s supposed to, the US impose their tempo, controlling possession and circulating the ball from back to front. Central defenders are often expected to start attacks with clean, incisive passing while still minding their defensive and organizing duties. They must also be mobile and disciplined so that fullbacks can bomb forward.

“A lot of the play starts with us,” Omar Gonzalez told USSoccerPlayers.com during the training camp held in Annapolis, Maryland a month ago. “That’s why you saw out there today he [Berhalter] was focused on the center backs, and closer to us and making sure that we’re making the right movements to start the buildup. It’s a process, and slowly but surely we’ll get things right.”

It’s a very modern interpretation of the position, and it’s no easy role to fill. In fact, the sturdiness and soccer IQ of the center backs could well turn out to be a key building block for the program.

Aaron Long and Walker Zimmerman were the starting duo again on Tuesday. While they weren’t tested much in defensive terms, their ability to continue mastering and executing Berhalter’s tenets as the tournament goes on will be hugely important. With the USMNT aiming to play seven games in order to defend their crown, it’s certainly possible that the likes of Gonzalez or Matt Miagza are also in line for minutes.

The makeup of the central midfield bears watching. Finding the right shape, balance, and personnel is crucial both in the Gold Cup and beyond. The team’s most impressive moments of this year were when they had control of the center of the park.

Wil Trapp and Michael Bradley fill that role of late, typically as a lone #6 with two box-to-box and/or creative types further upfield. On Tuesday that was Weston McKennie and Christian Pulisic, two talented players still working their way up to full match fitness. Cristian Roldan and Djordje Mihailovic have also picked up engine-room duty this month. Nick Lima has seen minutes in the hybrid right back/defensive mid role flashed here and there by Berhalter and seemingly purpose-built for the injured Tyler Adams.

> So what’s the first-choice look for this tournament? That may be a work in progress. With T&T having lost their opener to Panama, Berhalter may see Saturday as a chance to rest, rotate and fine-tune with a mind to the USMNT’s clash with Panama in Kansas City on Wednesday.

By design, the structure of the Gold Cup sets the stage for a US vs Mexico final. Should they keep progressing, that game might well be the first time that the USMNT face a proactive opponent intent on imposing their rhythm on the game, so the coaching staff will have that in mind.

Saturday’s wider narrative will inevitably connect to the 2017 World Cup qualifying loss to T&T in Couva, Trinidad, the last time these teams met. There’s real doubts as to whether that storyline matters as much to players on both sides as it may to US fans and pundits.

“Totally different team,” Bradley noted in remarks to the media on Tuesday. “There’s like two or three guys here who were in Trinidad. So I’m not sure other than it being a nice narrative for you guys, I’m not sure inside of the group if it carries a whole lot of weight … I have no idea if the game from two years ago means anything to [T&T].”

That said, the history will probably weigh heavy for those rooting in the stands and watching at home. A strong USMNT performance might mean something extra to them. The task for the squad is finding the balance between the intellect needed to execute the tactics and the intensity required for this occasion.

Many teams tend to take on the personality of their leaders. Berhalter’s measured style appears to be rubbing off on his players in this regard.

“One thing I’ll say about the team, on the inside, it’s been nothing like it’s been on the outside,” Arriola told reporters this week. “Extremely confident. When we looked back at the games, we saw where we could improve, and we saw what worked and what didn’t work. I give a lot of credit to the coaching staff and what they do. The positivity around the team helps us when it’s a low time, like after Venezuela.”