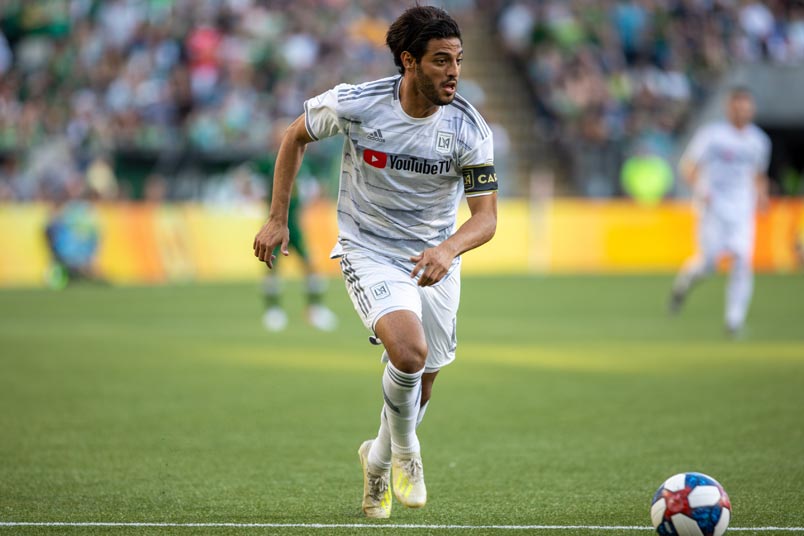 By Luis Bueno – RIVERSIDE, CA (May 29, 2019) US Soccer Players – At the halfway point of the 2019 Major League Soccer campaign, the Los Angeles teams have been battling for Western Conference and league supremacy. Just not against each other.

While the two LA teams haven’t met, the rest of the league has felt the effects of playing against LAFC and/or the LA Galaxy. Through the unofficial halfway point of the MLS season, LAFC sits first in the Supporters’ Shield standings while the Galaxy is in a tie for second in that table and the Western Conference standings as well.

Standing up to and facing off against the rest of the league is important. It will take on even greater significance down the stretch. The two LA teams have been in a two-team race since the start of the season. Really, since LAFC came into existence.

The ever-present battle for Los Angeles is raging on in the fourth month of this season. As the teams prepare for some downtime, there has been one clear winner for the battle of the City of Angels.

LAFC is the best team in Los Angeles and in MLS. They’re first overall in points with a sizeable lead over the Galaxy in the Western Conference table. While LAFC looks ready to pull away, the Galaxy is not exactly fading. While the Galaxy tripped up in its final match before the June break, the club is still in prime position for a playoff run. Contrast that to their May slide where MLS once again shows itself to be the league of the quick turnaround.

Of course, there is no LA Cup handed out to the winner of this unofficial race. One team would gladly hand over rights to the city if it meant an MLS Cup title would sit on its mantle. Still, the fight for local dominance is real.

The battle of LA has caused each team to put its best foot forward. Consequently, the level of play in the city has elevated substantially. The side effect to that is that LA is home to the best soccer in the league. Consider, the city’s second-best team is also the league’s second-best team. The Galaxy sits on 28 points with a 9-6-1 mark, equal with Eastern Conference frontrunners the Philadelphia Union with 28 points from an 8-4-4 record.

The Galaxy have had an overall solid campaign but it is LAFC who has taken its game to the next level. LAFC leads the league with 39 goals and is on pace to surpass the 80-goal mark on the season. LAFC would become just the second team in league history to reach 80 goals. Whether or not LAFC can break that 85 goals record set in 1998 is too early to forecast, although the team is certainly on track to threaten it.

LAFC is the only team in the league with double-digit victories and had reached that figure in May. NYCFC is the only other team to lose just once this season. LAFC also boasts the league’s second-stingiest defense with 13 goals allowed.

It’s been tougher for the Galaxy. The first two months were stellar as the club finished April with a 7-1-1 record. May though was less than kind with a four-game losing streak. The club’s 22 goals is just average despite featuring Zlatan Ibrahimovic up top. WIthout Romain Alessandrini on the field, the Galaxy seems to struggle to create opportunities. Behind Ibrahimovic there is no scoring depth.

Unless the Galaxy can bring someone in during the summer transfer window, the team’s offensive struggles might keep them from seriously threatening LAFC’s perch atop the conference, if that is even a possibility. The defense has improved, as a pair of recent road clean sheets will attest to, but it is inconsistent. New England carved up the Galaxy’s defense in the club’s final match before the break, beating the Galaxy 2-1 at Dignity Health Sports Park.

Two dates could determine if the Galaxy can get close to LAFC or not. The Galaxy host LAFC on July 19 while the clubs will face off at Banc of California Stadium on August 25. Neither match will have do-or-die playoff implications or possibly even Supporters’ Shield ramifications, at least not immediate ones. Both will be intense.

The Galaxy could use a rivalry match like that. The club always seems to do well when forced to play well and could use that kind of a jump start. Alas, the Galaxy will play four games once play resumes across the league before LAFC come for a visit.

There may be another game for each side sometime this summer. Both teams begin their respective US Open Cup participation soon, with LAFC heading to Real Salt Lake on June 11 and the Galaxy hosting NPSL side Orange County FC.

How seriously they take the Open Cup is worth asking. There is no league game for either side until June 22 for the Galaxy and June 28 for LAFC, so it is possible that the teams field a strong lineup next week. Doing so with each passing round could complicate matters for either side, thus forcing the coach’s hand to opt for a lineup of youngsters and other players who have not seen much action in league play thus far.

Still, a do-or-die battle against one another could captivate the city. It could make for yet another intense Galaxy-LAFC meeting no matter who takes the field that day.

That would give one team direct bragging rights over the other, but it would still just be one skirmish in an otherwise months- and years-long battle these two franchise will have against one another. The fight for 2019 is well underway and currently has LAFC on top. With five months left on the calendar, the Galaxy still has time to make things competitive.