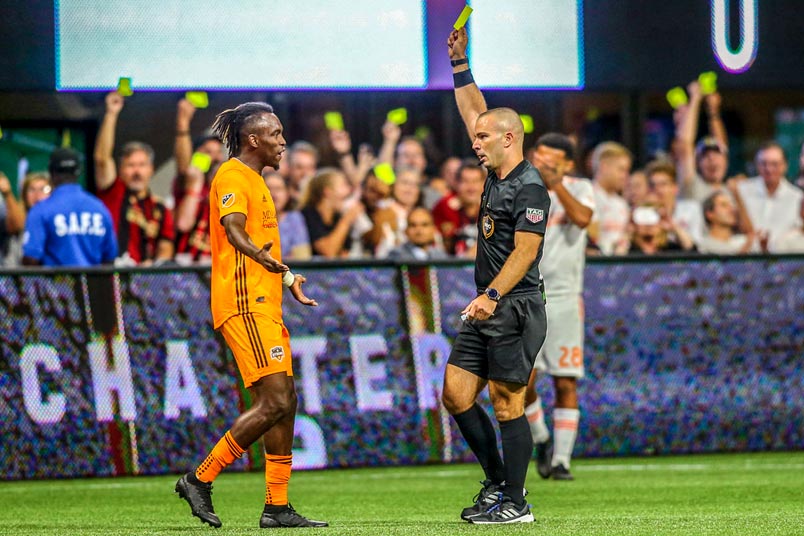 The soccer news starts with MLS games on the midweek schedule. Atlanta United shutout Houston 5-0 at home. The Dynamo went down a man in the 6th minute with a red card to Alberth Elis for violent conduct. Darlington Nagbe scored for Atlanta in the 27th minute with Brandon Vasquez making it 2-0 in the 29th. Josef Martinez scored in the 60th and 79th minutes with Julian Gressel adding a goal in the 88th. Brad Guzan kept the clean sheet with one save.

"There were still moments in the second half where we were still too loose," Guzan said. "We concede little things. When you have a team in Houston like we had tonight, you just want to keep going. It was good. The result was good, and the performance certainly was good. You can talk about the first play of the game where we get after them in a good way and 30 seconds in, we’ve got a chance. Those are moments that we need to build on and continue to push forward."

New England shutout Vancouver 3-0 at Gillette Stadium. Gustavo Bou scored in first-half stoppage time. Diego Fagundez added a goal in the 82nd and assisted on Carles Gil's goal in the 86th. Matt Turner didn't need a save to keep the clean sheet.

"Obviously, we’re real pleased with the group," Revs coach Bruce Arena said. "I think tonight’s game, certainly some good moments but still a little sloppy, inconsistent. We conceded some chances the beginning of the second-half, but as the game went on, I think we created some good chances and certainly the last 10-15 minutes was all ours. Our team’s learning how to play together."

Chicago and Columbus drew 2-2 at SeatGeek Stadium. Djordje Mihailovic put the Fire up in the 28th minute with Gyasi Zardes equalizing in the 47th. CJ Sapong returned Chicago's lead in the 63rd with Romario Williams equalizing in the 90th minute.

"We are aware of who we are," Chicago coach Veljko Paunovic said. "We are working to fix it and we will not stop until we make it. Eventually, one day, it’s going to turn in our direction and start to go well and hopefully it’s this Saturday. We are not going to give up and we will continue fighting to improve, fighting for this Club and this team and there is nothing else I have to add."

Toronto beat the New York Red Bulls 3-1 at home. Jozy Altidore opened the scoring for Toronto in the 6th minute with Alejandro Pozuelo doubling the lead from the penalty spot in the 26th. Tom Barlow pulled a goal back for New York in the 63rd. Ashtone Morgan finished off the Toronto scoring in the 72nd.