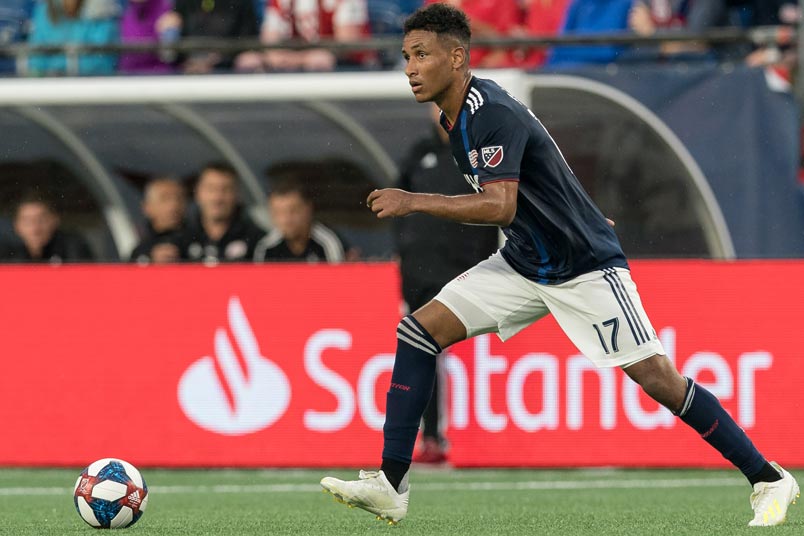 By Charles Boehm – WASHINGTON, DC (Jul 18, 2019) US Soccer Players – In 1975, Saturday Night Live poked fun at the hysteria around the movie “Jaws” with a skit called “Land Shark.” The title character, dubbed “the cleverest of all sharks,” able to “strike at any place, any time,” preyed on apartment dwellers foolish enough to open the door when the creature knocked under false pretenses. At which point, they would become the land shark’s latest victim.

I’ve been strangely reminded of the old bit while watching Bruce Arena methodically go about the work of revitalizing the New England Revolution over the past two months. Now 67, Arena has been at the forefront of the American soccer consciousness for going on 40 years. His methods and persona have been fairly consistent over the decades. Never one for complication, Arena would just as soon tease reporters with one-liners as claim credit for the improvement that generally follows his arrival at a team.

It seems like MLS opponents, in particular, should’ve figured him out by now. Over the years he’s grown fond of thumbing his nose at convention, to such an extent as to cloud evaluations of his expertise. Meanwhile, just like that land shark, Arena’s process keeps working more often than not. So does he.

With Wednesday night’s 4-0 thumping of the Vancouver Whitecaps, the Revs are now 4-0-2 since Arena stepped in. They’re on a 5-0-4 unbeaten run since parting ways with former coach Brad Friedel on May 9. At that time New England had just eight points from their first 12 games. They sat alongside expansion side FC Cincinnati at the bottom of the MLS Eastern Conference standings on a -19 goal differential thanks to a whopping 30 goals conceded. 11 of those came in Friedel’s final two games in charge.

Today the Revolution sit 8th in the East, two points and one slot out of the playoff places. Pricey new Designated Player Gustavo Bou debuted on Wednesday, the only change to the squad. The Revs look utterly transformed from the down-at-the-heels bunch that was scuffling along in the basement a few months ago. As Revs defender Andrew Farrell put it in a conversation with The Athletic’s Sam Stejskal, Arena “knows what he’s f***ing doing.”

I took a closer look at the reborn Revs when they visited DC United at Audi Field last week. Many elements of the familiar Arena formula were present. New England got the basics right, generally keeping an organized shape and committing few unforced errors. Quick and direct in transitions, the Revs looked to feed the ball to playmaker Carles Gil.

They were quick to exploit two moments of indecision from DC center back Steven Birnbaum, snatching an early advantage on a Teal Bunbury breakaway before Gil doubled the lead by tucking away the rebound of a saved Juan Agudelo header. Boos began to ring out as the Revs’ approach continued to frustrate United. Even a furious DC rally to salvage a draw after a second yellow card for Wilfried Zahibo left the visitors shorthanded for the final half-hour couldn’t crush the Revs’ burgeoning and palpable self-belief.

“We have been getting some results, but I think it’s good that we’re a bit disappointed because we knew if it was 11 against 11 we would’ve won the game,” said Agudelo postgame. “We’re a confident team right now and all the credit I think goes to the staff that’s come in and just flipped everyone’s mentality around and gotten the best out of every player.”

Farrell pointed to Arena’s ability to quickly craft a sturdy collective identity that was previously missing.

“I think we’ve grown a lot as a group. Each person has grown into their role on this team, and we’re fighting a lot more for each other,” he said. “If someone makes a mistake, someone steps up and takes over for them. Like you said, a year ago we probably lose this game. A couple months ago we probably lose this game. But now it’s a different team…. It’s the same players that were here two months ago, you know? So I think credit goes to Bruce getting the most out of each guy, but also the guys putting in the work and getting that confidence back and showing that we can be a team that can compete to be in the playoffs.”

I asked Arena what’s responsible for his team’s dramatic turnabout.

Arena scoffed at the notion that his team is climbing into the postseason reckoning. “Reeling in the East? I don’t think we’re reeling in the East. But we’re keeping our heads above water right now.” He played a similar tune when asked about that previously woeful goal differential after Wednesday’s win.

“We’re in a position now where if we’re tied with somebody, we’re going to lose the goal differential,” he said. “We’re not going to make up that kind of ground. I don’t even know what it is, but I think I noticed – it’s -10 now? Oh, we got it down a little bit…. Well, I don’t think we’re going to win a whole lot of games 4-0, but hopefully we can get it into single digits. But we’re behind the 8-ball in that category, so we need to win games.”

Those self-deprecating words should worry everyone competing with New England for a playoff berth this season. Even with a shorter season, more teams in the league than ever and a new postseason format, the MLS calendar remains relatively forgiving of slow starters. Bou’s transfer from Club Tijuana was a striking statement of intent for a club long dismissed as a league laggard in more ways than one. Couva or not, it appears that Bruce Arena remains equipped to win MLS games for some time to come.

“Bruce is an awesome coach. And more than a coach, just a real people person,” said DC winger Paul Arriola, who played under Arena on the USMNT. “Somehow he really gets his teams going, and it’s fun to watch. Obviously, today wasn’t fun because you’re playing against him, but I’ve enjoyed watching the Revs climb up the ladder slowly – winning games, grinding out results when they need it. Just talking to some of the players, they’re happy. They’re happy, and that’s what Bruce can do to a team – come in and change the mentality and give a little more freedom to the players to really enjoy the game. I definitely see that with the Revs right now.”