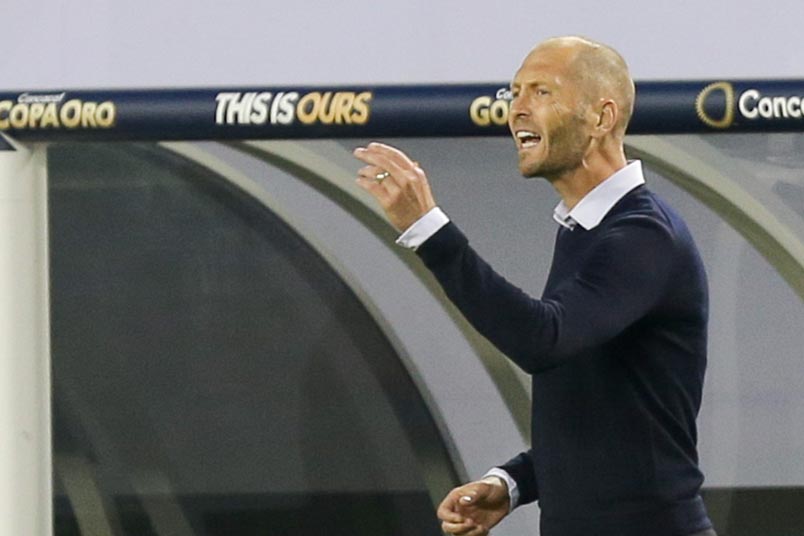 By Charles Boehm – WASHINGTON, DC (Jul 26, 2019) US Soccer Players – The home stretch of the USMNT’s year took further shape this week. US Soccer officially announced a friendly against Uruguay at Busch Stadium in St Louis on September 10. With that announcement, we now have a clear outline for the rest of 2019. That includes four competitive matches thanks to the Concacaf Nations League. The two September friendlies are against top 15 teams. These games will provide a useful measuring stick against top opposition to conclude the first year under Gregg Berhalter winds to a close.

A rematch with Mexico awaits on September 6 at MetLife Stadium, the hulking NFL venue outside New York. That’s followed a few days later by the meeting with Uruguay, who probably rank as the USMNT’s top opponent of 2019. Both will carry about as much hype, intensity, and anticipation as a friendly can. That will likely inform USMNT coach Gregg Berhalter’s approach.

On the con side of the ledger, a temporary grass surface is almost certainly in the works for the North New Jersey affair. The St Louis date will unfold on a baseball diamond necessitating sod laid over the infield dirt. At least the USMNT have experienced both venues before. They met Brazil at MetLife almost exactly a year before this Fall’s return, a 2-0 loss, and defeated St Vincent & the Grenadines at Busch Stadium in their first round of 2018 World Cup qualifying, a 6-1 win on November 13, 2015.

October brings the onset of the inaugural Nations League. The US plays in Group A of League A alongside Canada and Cuba. Each team will face the others twice, once at home and once away. The top finisher in the group advances to the Nations League semifinals, set for March. The last-place team drops to League B for the following edition of the tournament.

The Nations League will crown a champion next Spring and in that sense does offer a new path to regional bragging rights. It’s a quick opportunity for the USMNT to rebound from their Gold Cup disappointment. There’s still no getting around the fact that this Fall’s games will mean more for Cuba and Canada than the United States. That’s because of Concacaf’s new qualifying format for the 2022 World Cup.

With the next Hexagonal selected by virtue of next June’s FIFA World Rankings, it’s effectively impossible for the USMNT to fall out of the region’s top six. Those below that half-dozen, however, face a long and arduous alternate route to Qatar. They have less than a year’s worth of games with which to improve their rankings points.

It’s probably too high a mountain to climb for Cuba, who currently sit 179th in the world. They were badly and repeatedly beaten in the Gold Cup by a combined score of 0 goals scored and 17 allowed. Cuba visits the USMNT on October 11. The return fixture, likely in Havana, is on November 19, the last match of the year. One-sided US victories will be the expectation.

Canada, on the other hand, sit 8th in Concacaf in the FIFA table and thus stand to be one of the big losers under the new format. They will aim to mount a furious push to improve their rankings coefficient between now and June. Positive results against the USMNT would be a huge result for Les Rouge in that effort. They will host the US at Toronto’s BMO Field on October 15, and visit their southern neighbors one month later. These matches figure to be as dramatic as and intense as any in Nations League A.

MLS adds another wrinkle to Nations League play. Under the league’s new postseason format, the Cuba home and Canada away matches fall between the end of the MLS regular season and the start of the MLS Cup Playoffs (on Saturday, October 19. The November international window’s disruptive effect on the postseason was a key factor in this calendar shift. There will surely still be multiple interwoven facets for Berhalter, Canada boss John Herdman, and their MLS coaching counterparts to weigh up, however.

With all six remaining games falling inside FIFA international windows, Berhalter will on paper be able to select from his full player pool. There’s no real precedent to go by with the newness of the Nations League and the changes to the MLS season. At the tail end of a long year, injuries and wear and tear will inevitably intrude.

A notch or two above all that, the big picture of the program’s progression towards Qatar 2022 remains key. Given his mindset and methodology, Berhalter is not one to lose sight of his master plan to install and improve his style and concepts of play. Keeping that journey on course will take on new facets as 2019 concludes.