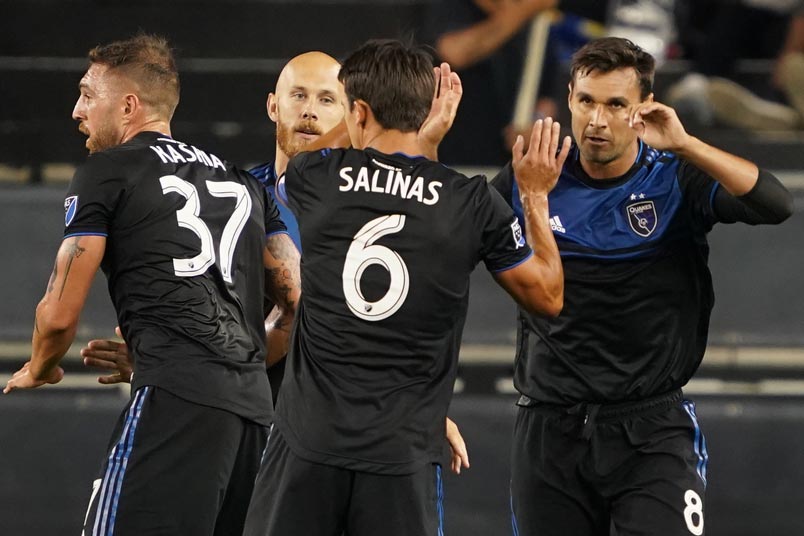 The soccer news starts with what’s now the expected response from MLS clubs playing summer friendlies. Play the reserves, play trialists, substitute as needed. After all, there’s the league schedule to consider.

Colorado went that route in their 3-0 loss to Arsenal in front of a sellout crowd at Dick’s Sporting Goods Park. The Rapids selling out their stadium is a rarity in better times, much less when they’re struggling at the wrong end of the Western Conference. Given that atmosphere and the level of opponent, maybe this was an opportunity to show what the team can do. Instead, playing on Saturday at Portland and scheduling a friendly for Monday, it was a situation where the only reasonable opportunity was to test their depth.

“First of all, what a great night in the stadium,” Colorado interim coach Conor Casey said. “It was an unbelievable atmosphere and I’m so happy the fans were able to experience a night like this. It was also great for our players as well, being able to have a sixteen year old and seventeen year old compete against Arsenal, and some of the USL guys… what a great experience for them. Arsenal is a good team and it was a great exercise for some of our guys who haven’t gotten as many minutes, and I was very pleased with their effort tonight. We did have some chances in the game, but Arsenal is a very good team, and at the end of the day it was all about having a great and positive atmosphere in this stadium.”

Two days between games isn’t exactly optimal for any team. Colorado opted to field a mixed squad with Colorado Springs Switchbacks players alongside their reserves. That almost makes you feel sorry for Arsenal, booking a preseason friendly against an MLS club two days before their International Champions Cup opener and getting something different. Still, this isn’t preseason for the Rapids. A league game on Saturday and a friendly on Monday didn’t leave Colorado with a lot of realistic options.

On Tuesday, San Jose and Real Valladolid drew 1-1 at Avaya Stadium. Valladolid made 11 subs. San Jose subbed on Chris Wondolowski in the 57th minute and he equalized three minutes later. The Earthquakes had a recognizable attack, playing two of their three goalscorers from their win at the Galaxy on Friday. Valladolid isn’t Arsenal, evident by the difference between an announced sellout and the reported 10,279 in attendance at San Jose. The Earthquakes benefited from more days and less travel, letting them do more with their regular roster.

“It’s always kind of a Catch-22 with these games,” Wondolowski said. “They’re always kind of midweek, in the heart of the season, but at the same time, it’s a great opportunity, especially for some of these guys to get some quality minutes. I thought a lot of guys stepped up and played well.”

Also in the soccer news, Steve Bruce is the new head coach at Newcastle United, replacing Rafa Benitez. Bruce resigned as manager of Sheffield Wednesday earlier this week. DeAndre Yedlin’s club finished 13th in the table with Benitez not agreeing to a new deal. He is now the coach of Dalian Yifang in the Chinese Premier League.

“I’m delighted and incredibly proud to be appointed as head coach of Newcastle United,” Bruce said in the press statement. “This is my boyhood club and it was my dad’s club, so this is a very special moment for me and my family. There is a huge challenge ahead of us, but it’s one that my staff and I are ready for. We’ll roll our sleeves up and we’ll be giving it everything from the off to ensure supporters have a successful team that they can be proud of.”

Goal’s Joe Wright with Sheffield Wednesday taking issue with Bruce’s exit. The Irish Examiner looks at what Bruce faces with Newcastle. The Guardian’s Paul Wilson with what Bruce is bringing to Newcastle.

Reuters reports that Cameroon fired coach Clarence Seedorf and assistant coach Patrick Kluivert after losing in the Cup of Nations round of 16. Inside World Football’s Andrew Warshaw has former FIFA president Sepp Blatter asking why FIFA is taking over CAF’s operations.