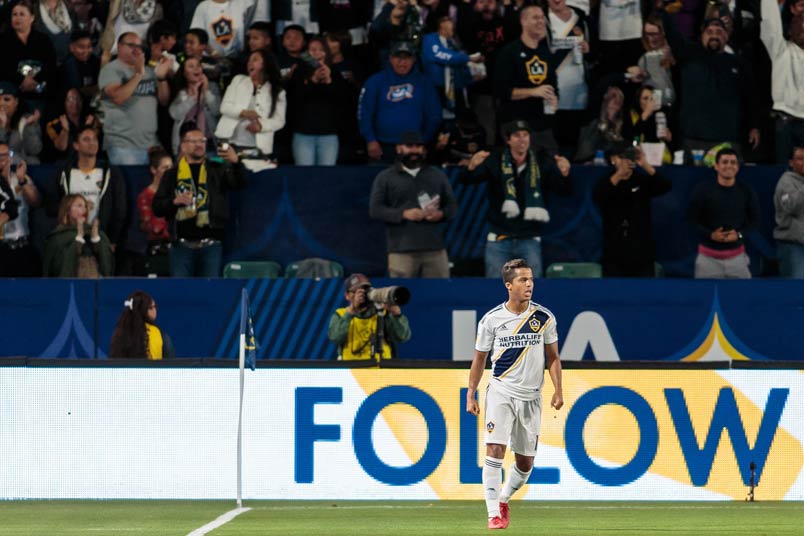 By Luis Bueno – RIVERSIDE, CA (Jul 10, 2019) US Soccer Players - Normally, if a Liga MX team signed a Mexican international who had spent his entire career abroad, the move would seem nothing short of genius. First of all, Mexicans typically start at home and emigrate to the Old World. Secondly, any Mexican player who can make a living abroad is likely someone who can step onto any Liga MX team and not only contribute but stand out. Lastly, a Mexican international helps connect the club to the national team, a great marketing tool.

Club America's biggest offseason signing fits all these criteria and yet it is a risky move, a last-chance opportunity of sorts. America landed Giovani Dos Santos, a not-so-highly-sought-after Mexican international who had been sans club since the LA Galaxy bought out his contract on the eve of the 2019 MLS season.

Without a club and looking short on many prospects both in MLS and in Europe, Dos Santos did the logical thing and returned to a country where he was born and spent the first 12 years of his life. He'll play in his home league for the first time in his career, one that has been more about unfulfilled promise than realized potential.

If he does well, Dos Santos will be a star, a misunderstood prodigy who needed the right situation to perform. If things do not go well, it's a continuation of what happened in LA. There is little risk for Club America, though. On paper, this move is grand. Dos Santos has played for Mexico in three World Cups and has always had a strong following in Mexico despite never having played for a Mexican club.

However, Dos Santos has looked good on paper for his entire career. In 2005, he appeared destined for stardom when he led Mexico to the U-17 World Cup title. The victory looked like a breakthrough and seemed to be the precursor for an era that would see Mexico's senior side have unprecedented success at the World Cup. With Dos Santos at the helm, it seemed like anything was possible.

The LA Galaxy certainly bought into the hype and promise that Dos Santos offered. In 2015, the year after Landon Donovan retired, the Galaxy brought him aboard and paid Villarreal roughly $7 million for his services. Additionally, the Galaxy paid him an annual salary of about $6 million.

For that, the Galaxy got 26 goals and 22 assists in 77 league games. His best season was 2016 when he scored 14 goals and added 12 assists helping LA to advance to the Western Conference semifinals. The series ended with penalties. Dos Santos placed his attempt over the crossbar.

Following that season, the club cleaned house. Bruce Arena left. Robbie Keane and Steven Gerrard left. Curt Onalfo took over as coach. Dos Santos should have stepped up and took control of the team and taken it into a new era. Instead, he scored six goals in 25 games and was a huge disappointment.

In 2018, Dos Santos played in just 14 games, missing time to both injury and the World Cup, and scored only three goals. The Galaxy missed the postseason for the second consecutive season. Incoming general manager Dennis te Kloese, who knew Dos Santos well after having spent time in charge of the Mexican national team program, decided he would rather the club take the economic hit than keep Dos Santos in the squad.

Enter Club America. The storied Mexican side fancies itself not only as the top club in Mexico but as a team who is not afraid to bring in high-priced and high-salaried players. Even in a league filled with domestic and international stars, Dos Santos will be one of the biggest names in Liga MX. The spotlight and pressure will be on him every game, not just from the relentless and demanding Mexican media but from the club itself. America is not an organization that sits idly by when the team struggles.

America is also enjoying a positive spell. The club reached the semifinals in last season's playoffs and won the Apertura 2018 season. America also won championships in the Apertura 2014 and Clausura 2013 seasons and has won a league-record 13 league titles.

The club's situation may benefit Dos Santos. Perhaps he's never fit in because he does not fit the mold for a player in a typical position. He's a forward but does not have the nose for the ball or the knack for scoring like forwards typically do. He's a playmaker but is not dynamic enough on the ball and does not create enough consistently to be a true playmaker. He can pass and move into space but is not disciplined enough defensively to be a true midfielder.

With America, he reunites with former national team coach Miguel Herrera. It was under Herrera when Dos Santos played the best. Dos Santos had a fine showing in the 2014 World Cup, scoring Mexico's lone goal in the 2-1 Round of 16 loss to the Netherlands. The league might also help.

Liga MX is not the quandary that MLS could be. Liga MX rewards attacking play. Creative players can stand out without the physical beating they can and do take in MLS. Dos Santos will find much more space to create with America than he did with the Galaxy.

The positive thing about this move is that if it pays off or not, the results will come quickly. Liga MX's calendar does not allow for experiments to play out at length. Rather, the payoff must be quick and immediate, or else the team will fall out of contention quickly. That's what Dos Santos signed up for with America, another chance to be a hero.