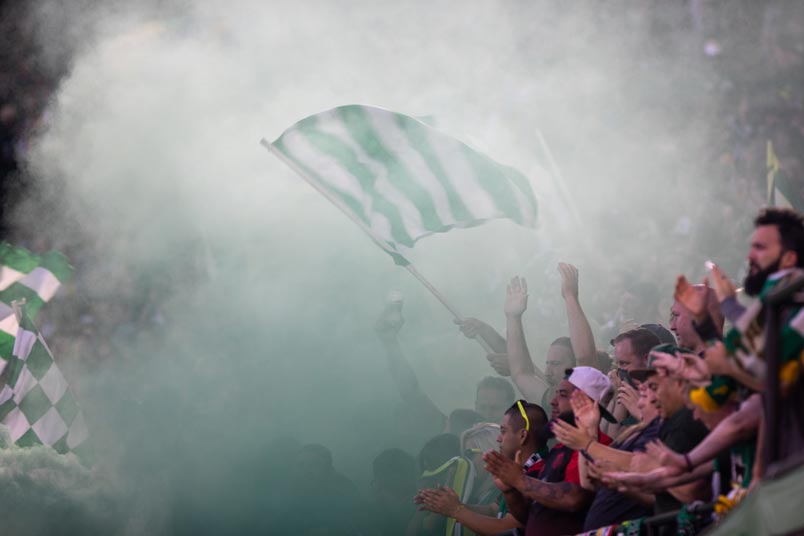 By Jason Davis – WASHINGTON, DC (Jul 19, 2019) US Soccer Players – The Portland Timbers are in the midst of a difficult season, depending on how you define “difficult”. There’s no objective way to judge the degree of difficulty for a given MLS season. Even if we attempted to create one, we’d first have to agree on which factors matter most in the assessment.

What tops the list? The vagaries of the schedule? Distance traveled in a league that has teams as far north as Montreal, as far west as Vancouver, and as far south as Orlando? How do we account for bad luck, things like injuries and questionable officiating? If an important player regressed dramatically and unexpectedly, how should we factor that in?

Everyone deals with some level of difficulty with every one of those factors. The differences between them from team-to-team are generally small or aren’t variables at all since they relate to the unchangeable: geography, to name just one example.

We can’t judge most seasons until after they’re over, anyway. Winning matters, of course. Can a season be “difficult” if it ends in a championship? A “difficult” championship season is the label is usually applied by the media looking for a narrative. Lost a star player for a portion of the season and still lifted a trophy? That must have been “difficult”! The best stories have conflict. We’ll go to great lengths to inject some whenever possible.

If we’re attempting to get out ahead of the narrative, however, we have to try to take stock of potential difficulty before a season begins. Now and then a team will hit the first week of the campaign knowing that a tough road lies in front of them. In recent years in Major League Soccer, that usually means an unbalanced schedule made so by an unusual stadium situation.

In 2018, DC United played 12 of its first 14 games on the road while waiting to open its new home, Audi Field. The two “home” games the club played were at alternative venues that, while local, weren’t comfortable.

Naturally, the road-heavy first three-and-a-half months impacted the season dramatically. United took just 11 points from the stretch and sat at the bottom of the Eastern Conference by the time Audi Field opened, and a home-heavy back end of the schedule began.

United signed Wayne Rooney, rode the home-field advantage for everything it was worth, and managed to climb up to fourth in the Eastern Conference. A difficult season, but not one that ended in disaster.

The Timbers’ difficult season of 2019 looks very similar to United’s difficult season last year. Due to the Providence Park renovations, Portland played 12 straight road games to open the season. They did without the luxury of a few “local” games in alternate venues to break up the run.

No one thought the Timbers would thrive during the first few months of the season, not in a League where the home/away splits are so large. The order of the day for the defending Western Conference champions was to not be so far behind the pack in the West that recovery would be impossible.

It couldn’t have started worse. Portland lost five of its first six games and conceded 17 goals. Only a draw in the opening week, against a Rapids team that would prove to be the worst team in MLS for the first half of the season, kept the Timbers from going pointless through mid-April. The Timbers looked very, very bad and it seemed possible they wouldn’t be able to recover when the home games finally came.

Coach Giovanni Savarese pulled his team out of the rut with a win at MAPFRE Stadium against the Crew on April 20. They won two more games over the new few weeks. That mini-streak did enough to keep Portland from digging a hole too deep to climb out of and set up the possibility of a DC United style revival that would deliver a playoff berth.

Providence Park reopened on June 1, finally bringing an end to the painful road trip and launching Portland into the “real” season. Judging the Timbers before June was nearly impossible. There was too much talent on the team for the poor record to truly reflect how good they were. The results still put them near the bottom of the conference.

The Timbers lost their home opener 3-2 to LAFC, a team that is difficult to beat anywhere. Not every team that came to town would be a juggernaut in the middle of a potentially record-breaking campaign. The wins would probably come. That would mean a swift climb up the standings.

It’s now mid-July. The Timbers look more competent, with flashes of play hinting at their quality. The addition of striker Brian Fernandez looks like a stroke of genius, with the Argentine delivering much-needed scoring punch at the front of the formation. Confidence should be high. Strike that. Confidence is high.

The chances are good that Portland will make the necessary run to pull themselves above the playoff line in the West. They have a chance to compete for a return trip to the MLS Cup final. There are just too many home games down the stretch of the season to imagine the Timbers missing the playoffs.

However, no attempt at assessing their chances is complete without pointing out that they’ve already dropped seven points at home since Providence Park reopened. Losing to LAFC is somewhat understandable. The two home draws in a row to the Rapids on July 13, and Orlando City on July 19 are less easy to swallow.

It’s a packed schedule with Savarese attempting to manage his roster. Thursday’s match against Orlando City came just a few days ahead of a trip to Seattle for a clash against the Sounders. That game always means more. The emotional toll will be significant. Interestingly, Savarese put out a first-choice lineup against the Lions, perhaps prioritizing three points at home over rest for the rivalry match.

The problem with the unbalanced nature of the schedule and attempting to ramp up to full throttle after a tough run of road games to start the season is it that it doesn’t always come easy. With an additional 4,000 seats added to the already tremendous atmosphere of Providence Park, it would be simple to assume that the Timbers would take that energy and turn it into wins.

As the draw with Orlando showed, however, energy needs channeling to be effective. Portland took 26 shots to Orlando’s two, but still only managed a point because all but four missed the target. A difficult season isn’t made just by the road games the Timbers played from March until June. It’s also made by the pressure that comes with home games in a part of the season when everyone else is already ahead.

The Timbers are good enough to make the playoffs. There are points available to them if they can make home field count. This, though, is a “difficult” season with nothing guaranteed.