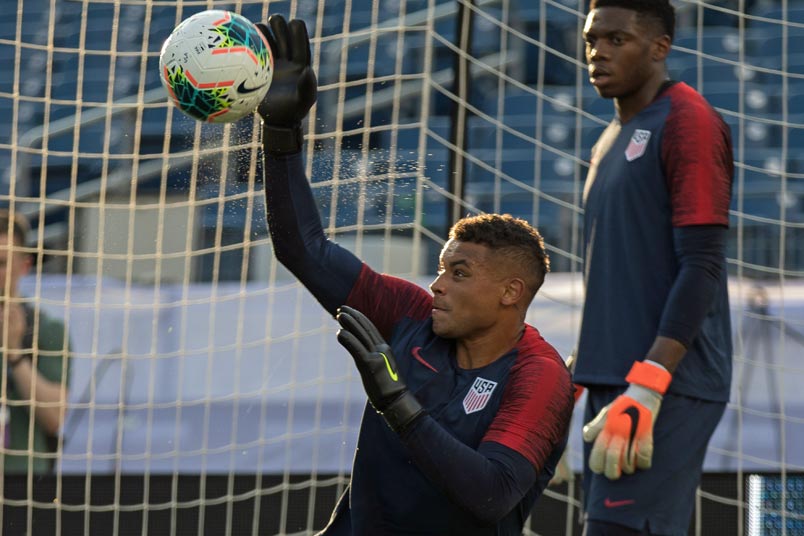 The USMNT plays Mexico in the final of the 2019 Gold Cup on Sunday (9pm ET – FS1) with plenty of questions for both teams to try to answer. It’s been an interesting Gold Cup, getting to the likeliest conclusion of the two big North American nations playing each other for the trophy. How both got there wasn’t as straightforward as expected. Here are three things to look for on Sunday.

Both of the finalists progressed through the tournament without a loss, though Mexico needed extra time in their quarterfinal with Costa Rica and gave up four goals to the USMNT’s one. Both also had close calls with what seemed to be overmatched opponents. For Mexico, it was beating Martinique 3-2 in the group stage and Haiti 1-0 in the semifinals. For the USA, it was the 1-0 quarterfinal win over Curacao. That’s left both teams with issues to address, though both have managed this tournament well enough to get to the final. Though that’s always the expectation due to reputation and holding most of the tournament in the United States, it’s also not a given. Our first Mexico vs USMNT final since 2011 means stopping other teams from disrupting the tournament. With that in mind, the result always counts more than the situations that produced it.

The USMNT scored 10 unanswered goals over its first two group stage games. Since then, they’ve scored five. While the level of opposition may have risen, the USMNT avoided the toughest route to the final with Curacao advancing from group C. The odd situation of a weather delay lasting longer than the semifinal in Nashville didn’t shake the USMNT. From the knockout round, it’s Weston McKennie and Christian Pulisic that should have Mexico coach Tata Martino concerned. Their connection is working and producing goals. Who USMNT coach Gregg Berhalter uses as a true target forward is once again an open question. He started Jozy Altidore in place of Gyasi Zardes against Jamaica, subbing on Zardes for Altidore in the 56th minute.

Mexico didn’t enter this tournament with their best available squad due to a few reasons. That’s hung over El Tri throughout this tournament and limited what we can know about this team now and moving forward. When the missing regulars show up, Mexico changes for the better. Right now, it’s this team showing that they can put together the kind of 90 minutes that, as Luis Bueno pointed out earlier this week, impresses. They’re trying for that against a USMNT that needs to make a similar statement. That could result in the clash of styles that produces intriguing soccer. The close score lines that got both teams here may not matter in the final. This could be the free flowing game that redefines what we thought we already knew about the 2019 Gold Cup.

In MLS, FC Dallas shutout DC United 2-0 at home. Santiago Mosquera opened the scoring in the 6th minute with Dominique Badji doubling the lead in the 65th. DC’s Luciano Acosta saw red in the 73rd minute. Dallas goalkeeper Jesse Gonzalez made one save to keep the clean sheet.

New England beat Colorado 2-1 at Dick’s Sporting Goods Park in a game delayed by weather. Teal Bunbury put the Revs up in the 8th minute with Juan Fernando Calcedo scoring in the 52nd. Diego Rubio pulled a goal back for the Rapids in the 71st minute. Colorado’s Kellyn Acosta saw red for dissent a minute into stoppage time.

“I have been involved in some odd things and that competes with all of them,” New England coach Bruce Arena said. “That was a “blank” show. I think the delays and all of that certainly — they’re trying to be concerned with the safety of the players and all, we know that, but it got kind of ridiculous. Our team showed a lot of mental and physical toughness. To walk away with three points is huge because this team (Colorado) has obviously been on a roll.”

The Independent’s Jack Pitt-Brooke on what new manager Frank Lampard is bringing to Chelsea. FourFourTwo’s Richard Jolly looks at the lack of opportunities for older British managers.