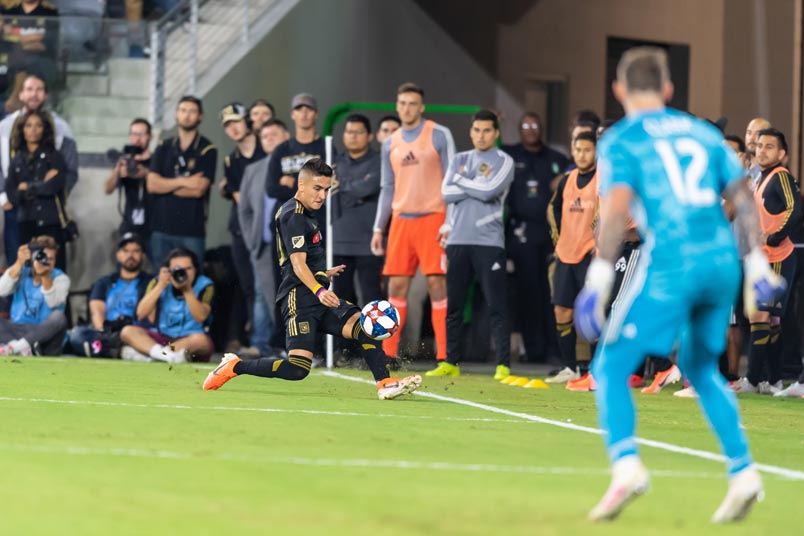 By Jason Davis – WASHINGTON, DC (Jul 12, 2019) US Soccer Players – We’ve reached that point in the US Open Cup tournament when the trophy is close enough that everyone is taking it seriously. For the Major League Soccer clubs still standing, that means no more reserve-heavy lineups featuring players more likely to suit up for the USL affiliate on a given weekend than play in a topflight league match. It means the average age of the eleven names on the team sheet is a few years older than back in the fourth round. It means a tournament that once was something of a nuisance is suddenly an important competition that requires a full effort.

The seriousness of the Open Cup at the quarterfinal stage played a large role in the events of Wednesday night. The last eight in this year’s tournament featured six MLS teams and two clubs from the USL Championship. Each and every year we’re reminded that no team outside of MLS has won the Open Cup since the Rochester Rhinos in 1999. Those two USL clubs carried the weight of their Cinderella into difficult road games against MLS competition.

The weight was too much. New Mexico United crashed to earth in Saint Paul, where Minnesota United knocked out the USL Championship expansion club 6-1 at Allianz Field. New Mexico United managed to grab a lead in the seventh minute, only to see the Loons charge back with four goals over the next 16 minutes.

The other USL Championship team in the quarterfinals, St Louis FC, did better in terms of the scoreline but still saw its Open Cup run end 2-0 in Atlanta. The win counted as something of a bounce-back for the MLS champions, coming off a pair of games last week that delivered a 5-1 drubbing in Chicago and a dispiriting 3-3 draw with the Red Bulls.

Pity Martinez made the difference for Atlanta. It’s no secret that Martinez’s first six months in MLS haven’t exactly gone to plan: Through 18 appearances in the league, the record-breaking signing has a pair of goals and four assists. The game-winner he scored against St Louis FC won’t pad those MLS numbers, but it might point to something over the second half of the season. Atlanta’s slow start and the difficult adaptation to Frank de Boer’s tactics only magnified Martinez’s issues finding his legs in Atlanta.

The goal to push United into the semifinal against Orlando came just a few days after rumors filtered up from Argentina that Martinez might leave Atlanta on loan. De Boer laughed off those rumors on Tuesday, declaring that Martinez’s rough start was understandable given the circumstances.

“It’s ridiculous, you know,” De Boer said..” We’re just halfway through the season and he’s new. I always say the first six months is the hardest for everyone who comes to a new culture. He has to adapt.”

It’s telling that De Boer’s comments came via audio provided by the team itself. United has a lot of money invested in Martinez. While it’s likely too early to give up on him, the creeping doubt and persistent rumors can only make it more difficult. A strong message from the club, even if it belies concern, makes sense.

It doesn’t help that Martinez is fueling the flames of controversy himself. On Thursday, an interview with Martinez by Fox Sports Argentina made the rounds. In it, Martinez speaks to his dislike of De Boer’s tactics and approach to dealing with the media. Most distressing, he states bluntly that while there’s no chance of a return to River Plate, he would prefer to be with the Argentine giant. When the interview happened isn’t clear, but the timing of its release might undermine any good feelings coming from Martinez’s Open Cup goal.

LAFC has not problems with discontented players speaking publicly, but the club’s quest for a triple haul of trophies this season came to an end on Wednesday at Banc of California Stadium against the Portland Timbers.

Both Giovanni Savarese and Bob Bradley picked full-strength squads for a game that promised to be intense from kickoff. In just two seasons and a handful of games, LAFC and Portland developed a rivalry with a physical edge and real animosity. For 83 minutes, neither team could find the back of the net. As the game stretched, chance after chance went begging on both ends of the field and extra time seemed an eventuality.

Jeremy Ebobisse’s goal in the 84th minute came from an excellent finish but felt anticlimactic. Following a sequence in which he made a full-field, lung-busting run to block a shot and keep the game tied, LAFC fullback Jordan Harvey misplayed a ball towards his own net and put Ebobisse in on goal for the winner.

The Timbers are now the only team to beat LAFC at Banc of California Stadium this year. Bradley’s team is undefeated in league play in their own building.

It’s hard not to see the Portland win as potentially important beyond the Open Cup. LAFC won’t pull off a three-trophy haul in 2019. The 2017 Toronto FC team remains the only club to collect the MLS Cup, the Supporters Shield, and a domestic cup in the same season.

Portland’s win also gives them real reason to think they can play with the best in the league. The Timbers slow start, in large part a function of a 12-game road trip to begin the season, set the team back in the chase for the playoffs in the Western Conference. It’s clear that the quality to compete was always there and what remains in question is where in the final standings the defending conference champions will finish.

Savarese’s team might not be able to catch LAFC before the playoffs arrive. If or when they face the league leaders in the postseason, they can claim confidence from Wednesday’s win.

Orlando City prevailed over NYCFC in the fourth quarterfinal on penalty kicks in front of a small, but very engaged, Lions crowd. Orlando gave up a late equalizer to Maxi Moralez that pushed the game into extra time and put Orlando’s chances of advancing in jeopardy.

Penalties were a scene. After NYCFC elected to take the kicks at the opposite end of the field from Orlando’s supporters, those fans dashed around the stadium to fill in the empty seats on the other end. Security initially attempted to stop them, but with fans streaming in their direction and no real reason to prevent them from moving into the sections behind the goal, staff moved aside.

Orlando goalkeeper Adam Grinwis proceeded to make two stops on NYCFC attempts, no doubt aided by the raucous fans behind him. Orlando’s victory sets up the showdown with Atlanta and prompted club CEO Alex Letaio to wax poetic about the achievement on Twitter.

“In my humble opinion, tonight was the most important moment of the history of the MLS era of the club. Thanks fans! That run at concourse tho… I will never forget,” Leitao tweeted.

It would be easy to give an eye roll to Leitao’s tweet, but Orlando is a club that hasn’t come close to a trophy since the move to MLS. The Open Cup run is therefore important in its own right. It might also serve as a catalyst for a push toward the team’s first-ever MLS Cup playoff berth down the stretch of the season.