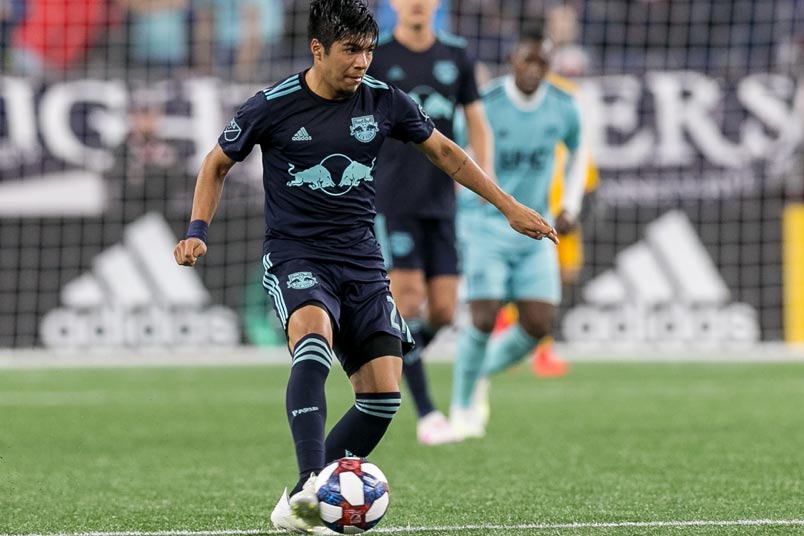 By Clemente Lisi – NEW YORK, NY (Jul 15, 2019) US Soccer Players – MLS is a league that plays through FIFA international dates and major tournaments. Throw in a crowded schedule that includes the US Open Cup, and coaches learn quickly that rookies are instrumental to the success of any team.

The need to rotate players makes the league one of the best in the world when it comes to giving young players minutes. All those opportunities often lead to becoming a starter, a National Team call up, and even a transfer abroad. It’s all part of developing players, one of the core missions of MLS, and helping players them gain pro experience.

Orlando City, for example, has had to endure a summer schedule that has crammed four matches in a span of just two weeks. Throw in the travel and heat and it hasn’t been easy for the Florida club as they battle for that final playoff spot. Last Sunday’s 2-2 draw against the Union in Philadelphia, for example, highlighted the reliance on a rookie striker in this case. Orlando City SC’s second goal came via newcomer Santiago Patino.

“I mean I’ve been thinking and dreaming this for a long time… it finally happened,” Patino told reporters. “I’m very happy to get my first goal for Orlando City and of my professional career.”

With the race for Rookie of the Year in full swing, here are five first-year standouts to keep an eye on:

It should be no surprise that a Red Bulls player is on this list. RBNY is one of several MLS teams known for player development and Fernandez is the latest success story to climb the academy ladder. A former New York Red Bull II midfielder, the 20-year-old Fernandez spent the past two years playing at Wake Forest. He is also an alum of Blau-Weiss Gotschee, one of the oldest youth programs in New York City.

Heading into this past weekend, Fernandez has appeared in 13 games starting three of them. He’s been key to both the defense and the attack. He’s got two goals and two assists to his name so far this season and pitched in well each time injuries or international duty has left a hole in the starting lineup.

The 22-year-old Brazilian-born striker was a collegiate star at the University of Denver. That success is spilling over into MLS this season. The #5 pick overall in the SuperDraft, Shinyashiki has played in 17 games, starting seven of them. He’s giving Rapids fans something to celebrate in what has otherwise been a dismal season.

The highly-touted Shinyashiki has four goals and an assist this season. His speed and goal poaching abilities bode well for the future. Shinyashiki had been heavily scouted by Rapids interim coach Conor Casey because he reminded the former National Team striker of himself. He’s proven clutch for Colorado on a few occasions already, something this team can build and potentially rally around.

Like the Red Bulls, FC Dallas builds on Homegrown Players. This season has been no different. One of four FC Dallas players named to the upcoming MLS Homegrown game, Cerrillo is just 18 years old. The midfielder has also had lots of opportunities to play this season, starting in 10 games out of his 11 appearances. Named to the USMNT U-20 World Cup squad, Cerrillo is getting plenty of attention and deservedly so. He’s showing plenty of pace and ability to win 50-50 balls, is a highly-valued member of the team, and one of the best teens in the league playing the position.

Another Homegrown Player, Gutjahr played at Indiana before signing with the Fire. He’s played in eight games starting five of them this season. A defensive midfielder, Gutjahr, 21, has also played for the USMNT U-20s. Gutjahr is wearing #33 in honor of his Hoosiers teammate Cody Jewett’s dad, who died of colon cancer in 2018.

Like the Rapids in the West, Chicago is struggling in the Eastern Conference. Nonetheless, the versatile Gutjahr is getting valuable minutes. His ability to play multiple roles, both as a defender and in the midfield, gives the Fire options at a time when they need it most. It also allows him to stand out on a team currently trying to rebuild itself into a playoff contender.

Miller was the 27th pick in this year’s SuperDraft. The 22-year-old center back does indeed have a bright future if his recent form is any indication. Miller has played in six games, starting five of them, and added some stability to a backline that’s been very leaky as of late.

After four seasons at Syracuse University, Miller made Canada’s Gold Cup roster, one of several promising youngsters on that team who play in MLS. Although he only has one senior international cap to his name, Miller impressed the Orlando coaching staff during preseason and has the skills to set himself apart in seasons to come. Look for him to become a regular part of the lineup rotation this summer.