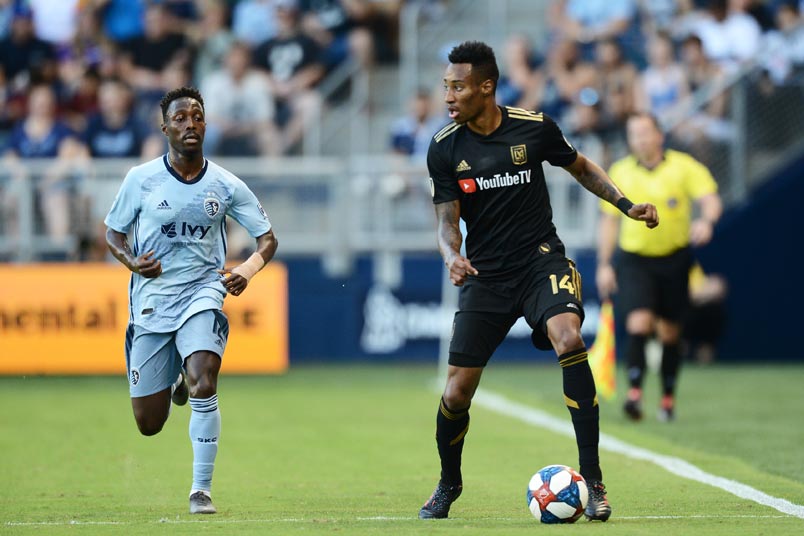 By Jason Davis – ORLANDO, FL (Jul 31, 2019) US Soccer Players – For most, the MLS All-Star Game is little more than an exercise in partner service and a chance to throw a few parties. It’s an exhibition. By definition, that limits its importance.

Don’t try to draw any serious conclusions from whatever happens when the MLS All-Stars face off against Atletico Madrid in Orlando on Wednesday night. Doing so would be pointless. Whatever the result, the game is just a bit of fun thrown into the middle of a grueling summer.

That doesn’t mean that the MLS All-Stars don’t want to win. It also doesn’t mean there aren’t players who can use the game to showcase their talents gain and a bit of notoriety in the process. No scout will decide on a transfer based on an All-Star Game performance. It can’t hurt to play well against a European power with players worth one hundred million euros on the other side.

Atlanta’s Ezequiel Barco was named one of the best teenage players in the world just ahead of this move from Independiente in Argentina to Major League Soccer. That label, and Barco’s significant price tag ramped up on the pressure. Barco’s was the second of Atlanta’s “investment” signings. He’s a young South American with a massive potential sell-on value. Right now, he’s here to help Atlanta win championships. Eventually, he becomes a big-money move to Europe.

2018 didn’t go to plan for Barco. A secondary figure in the championship team, Barco struggled in MLS. Rather than burst onto the scene as his price tag and accolades might suggest, Barco sat behind more veteran players.

Barco’s on-merit All-Star selection tells the story of his improvement in 2019. While United itself has foundered at times during the transition to Frank de Boer’s system, Barco emerged as a bright spot on the attacking end of the field. Barco missed significant time due to international duty with the Argentina U-20s and an injury layoff through the first half of the season. He’s already scored four goals in eight games, the same number he scored in 31 appearances last year.

The timeline on a potential sale of Barco is unclear. That could change and quickly. Not necessarily because of a good performance against Atleti, but because of a strong showing down the stretch of the season. Atlanta is chasing another MLS Cup with Barco as a leading figure.

It only seems appropriate that the league’s best developer of homegrown talent would have one of those homegrown talents in the All-Star Game in Orlando. FC Dallas’s Paxton Pomykal won’t be the only member of his young, FC Dallas teammates to make an All-Star Game. This season, he represents that group.

To call Pomykal the “best” of the FC Dallas bunch would be to draw too clear a line around something difficult to pin down. The 19-year-old midfielder is undoubtedly a generational talent. Despite a small number of games as professional, Pomykal is already drawing comparisons to the likes of another homegrown MLS product, Tyler Adams.

Adams parlayed a brilliant start to his MLS career into a transfer to RB Leipzig of the German Bundesliga. Pomykal could take a similar route.

For now, Pomykal is starring in FC Dallas’s midfield. Like with Barco, the U-20 World Cup and an injury have limited his appearances in 2019. Unlike Barco, Pomykal’s professional history is short enough that those missed games make it tough to pin down what his ceiling might be.

FC Dallas is built on youth with a coach new to MLS and a few missing pieces due to injury. It all makes for an interesting stew in Frisco. FC Dallas might not be ready to challenge for a championship, but it won’t be because Pomykal isn’t ready to lead them there.

Whatever opportunity he gets on Wednesday, Pomykal is already on the European radar. The All-Star experience might just grab a few more eyeballs.

LAFC’s best player is Carlos Vela. The Mexican star is on pace to break records this season. If the second-year club lifts the MLS Cup, he’ll receive the lion’s share of the credit. Second behind Vela in goals for LAFC is 20-year-old Uruguayan Diego Rossi. Where Ezequiel Barco stumbled in his first year in MLS, Rossi thrived. Following the lead of Vela and benefiting from the system created by Bob Bradley, Rossi hit in 12 goals in 2018.

In 2019, LAFC’s investment in Rossi is beginning to return interest. Clubs on the far side of the Atlantic are testing the proverbial waters with speculative bids for the forward. Considering that LAFC paid just $4 million for Rossi from Penarol ahead of their inaugural campaign, they look set to profit handsomely from bringing Rossi north.

Rossi probably won’t go anywhere during the summer European transfer window with LAFC chasing history and in position to host an MLS Cup final. A special showing against Atletico could bump awareness of his talent and prompt more aggressive transfer offers. LAFC already knows that Rossi’contributions would be impossible to replace before the MLS secondary transfer window closes.

Barco, Rossi, and Pomykal are all young players with attention from suitors abroad. Mark-Anthony Kaye, Rossi’s LAFC teammate and a key player in the club’s midfield, is not usually spoken about in those terms. The buzz around the other three is enough to spark real rumors of a pending move. Kaye, a former USL player given a chance at the MLS level by Bradley, doesn’t appear to have the same ceiling.

Still, the chance to get on the field against Atletico Madrid would do more for Kaye’s profile than for that of his three All-Star teammates. That doesn’t mean that Kaye will become a transfer target. Considering his path to the top division in North America, it does mean he could get deserved recognition. That might awaken interest in some corner of the wider market.

Kaye has impressed with his passing and defensive abilities in the LAFC midfield. The club suffered without him following an injury in 2018. It’s not wrong to suggest Kaye is the difference between last year’s one-and-done playoff team and this year’s first-place juggernaut.

Atletico Madrid’s presence in the All-Star Game has an impact on MLS, even if it’s hard to pin down. It will affect those four players if they get a chance to play even if there’s no way of knowing how much. Exhibition? Sure, but that doesn’t make it worthless.