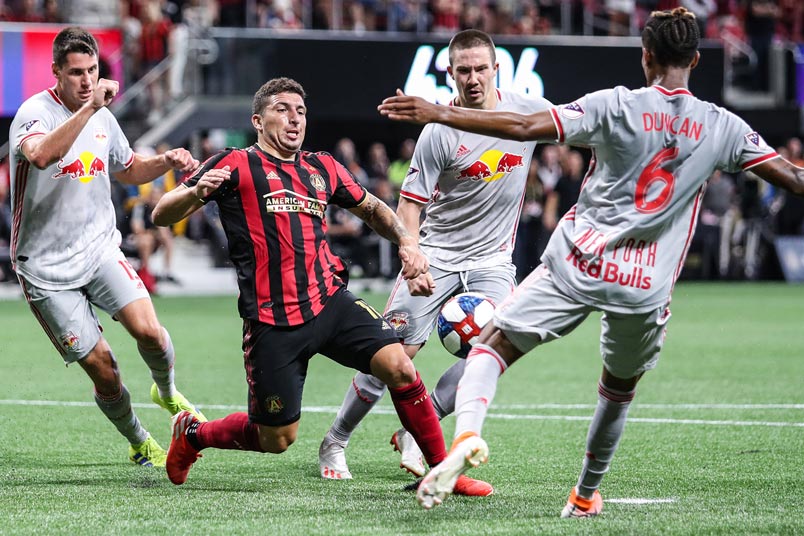 Week 17 resumed with LAFC staging a comeback to pick up a 6-1 home win over the Vancouver Whitecaps. Yordy Reyna scored for Vancouver in the 5th minute with LAFC equalizing through at 35th minute own-goal. Adama Diomande put LAFC up for good in the 41st. Mark-Anthony Kaye scored in the 46th minute with Carlos Vela adding goals in the 54th and 70th. Diego Rossi finished off the LAFC scoring in the 72nd minute. Vancouver finished a man down with an 85th minute red card to Fredy Montero for a serious foul.

FC Cincinnati beat the Houston Dynamo 3-2 at home. Kekuta Manneh opened the scoring in the 29th minute with Rashawn Dally doubling the lead in the 38th. Victor Ulloa made it 3-0 Cincy in the 61st. Houston mounted a comeback through a Romell Quito penalty in the 79th and an 81st minute own-goal.

Minnesota came back to beat Montreal 3-2 at Stade Saputo. Anthony Jackson-Hamel put Montreal up in the 1st minute with Mason Toye equalizing in the 9th. Rudy Camacho returned the Montreal lead in the 13th minute with Ethan Finlay equalizing from the penalty spot in first-half stoppage time. Toye scored United’s winner in the 47th.

Seattle beat Columbus 2-1 at MAPFRE Stadium. Pedro Santos put the Crew up from the penalty spot in the 13th minute. Nicolas Lodeiro equalized with a 56th minute penalty and scored the Sounders’ winner six minutes into stoppage time.

“I think we showed some character and some spirit,” Chicago coach Veljko Paunovic said. “We fought, we had a couple of good opportunities and I think we created. We showed a better face in the second half. We fought much more in the second half. Now we have a stretch of two home games, which are very important for the whole Club, for our team, for our fans. Both games ahead of us are must wins and this time we are going to do a better job in recovering and preparing and hopefully win both games.”

“I have positive thoughts about this match,” San Jose coach Matias Almeyda said. “We faced a team that tried from the very first minute to follow through on a plan where they can cause damage while being very patient. We were able to hold them off from start to finish. That’s why we came away with the win. We strengthened our side by making changes to be more offensive and take more risks, and we earned the three points.”

“It was not enough because you work so hard to come back, and then you go away with a very bad taste in your mouth,” Atlanta coach Frank de Boer said. “You leave the field, and you could get a really good boost from the comeback, of course, and now you are very disappointed because you only have one point.”

Philadelphia and Orlando drew 2-2 at Talen Energy Stadium in a game postponed from Saturday due to weather. Marco Fabian put the Union up in the 4th minute. Dom Dwyer equalized in the 67th with Santiago Patino giving City the lead in the 81st. Kacper Przybylko equalized for Philadelphia in the 90th minute.