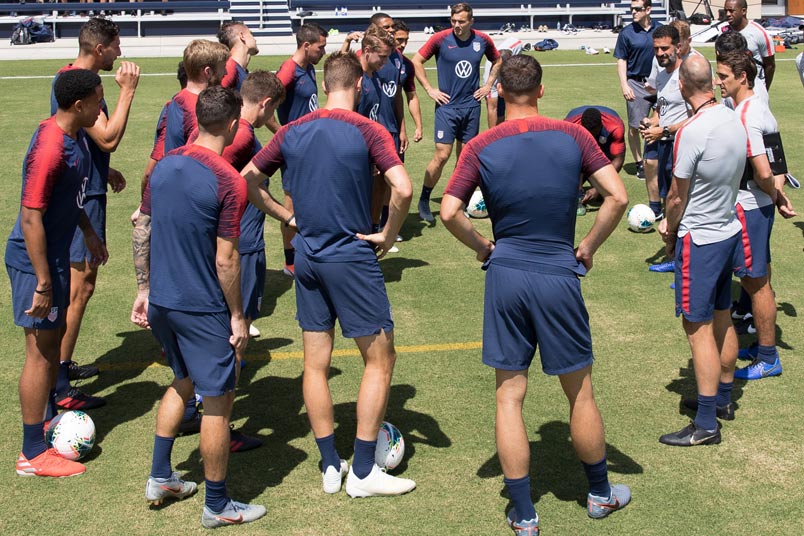 By Charles Boehm – WASHINGTON, DC (Jul 5, 2019) US Soccer Players – When the USMNT play Mexico, it’s not just a game, it’s an event. The biggest soccer event in North America, in fact. This is the occasion that players and fans on both sides of the border, not to mention advertisers and television executives, crave.

Thanks to El Tri’s narrow semifinal win over Haiti and the USMNT’s storm-lengthened defeat of Jamaica, everyone finally gets their wish on Sunday as they face off in the 2019 Gold Cup final at Soldier Field in Chicago (9pm ET – FS1). It also looks like the biggest litmus test yet for the new-look USMNT.

Here’s a few plot lines to consider as the region’s giants play for another trophy.

Old and new, familiar and unexpected

Given the anticipation around this matchup, it’s odd and a bit ironic how little they’ve met in competitive play lately. Thanks to the format and results of the past four Gold Cups, we’ve only gotten the home and away matchups in the Hexagonal round of the 2014 and 2018 World Cup alongside the Concacaf Cup in 2015 since the epic 2011 Gold Cup final at the Rose Bowl.

The US was superior during the 2014 qualifying cycle, holding El Tri to a scoreless draw at Estadio Azteca before the traditional 2-0 win in Columbus, Ohio. The tables turned four years later. Longtime heel Rafa Marquez helped Mexico steal that hex-breaking 2-1 win on a chilly night at MAPFRE Stadium, the second-to-last game of Jurgen Klinsmann’s tenure. The USMNT had to settle for a 1-1 draw in Mexico City under Bruce Arena a few months later. In between, it was Mexico winning the only Concacaf Cup, beating the USMNT 3-2 at the Rose Bowl on October 10, 2015 to qualify for the Confederations Cup.

All of which is to say that traditions can rise and fall quickly in this border rivalry. Both sides could once count on powerful home-field advantages and deeply-held identities. The story has become more complicated of late.

As the two countries have become more interwoven in cultural terms, the enmity between them on the field has evolved, too. Something similar is true of the tactical battle. The US is currently building a methodical, possession-oriented style under coach Gregg Berhalter. Meanwhile, El Tri has grown comfortable with direct play and transitions under their new boss, Gerardo “Tata” Martino. Which brings us to…

We’ve already heard a lot about the angle of two first-year head coaches matching wits. It’s a duel of cerebral tacticians, and a redux of their past MLS meetings in charge of Atlanta United (Martino) and Columbus Crew SC (Berhalter).

Berhalter pulled off a memorable upset in front of 67,221 Atlanta fans at Mercedes-Benz Stadium in 2017, Crew SC crashing the party at ATLUTD’s first-ever playoff game via penalties after a 0-0 draw. That was the exception to the rule, however, as Tata’s Five Stripes won all four of their regular-season meetings by a combined score of 10-2.

Most readers will by now be familiar with the general outlines of Berhalter’s philosophy. Martino’s Mexico is at a similar phase of their development as they master the Argentinean’s aggressive, attack-minded concepts, which tend to be fun to watch but at times reckless in defensive terms.

Both the US and Mexico have been somewhat inconsistent during this Gold Cup, mixing dominating blowouts with close and occasionally jittery results, albeit with neither side tasting defeat yet. After Wednesday’s win, Berhalter praised El Tri while also calling them “vulnerable,” which suggests he’s got a tactical wrinkle or two in mind.

Sunday’s final could well hinge on central midfield. Michael Bradley and Weston McKennie have been building a promising partnership behind Christian Pulisic, freeing him to roam and create while allowing their own stretngths of distribution and ground coverage to shine.

Meanwhile, Mexico continues to rely on the savvy Andres Guardado and Jonathan dos Santos, two veteran mainstays capable of imposing themselves on any game. Filling a more defensive role, 21-year-old Edson Alvarez is rising to the fore in Martino’s system and has drawn the attention of big European clubs.

Given the history, the setting, and the stakes, we could see a frantic tempo in this area come kickoff. Or might it unfold as more of a brainy chess match? Whatever the situation throws at them, the central trio that adapts best to the moment is likely to anchor the eventual winners.

We’ve discussed before how integral wide attackers are to Berhalter’s designs. Paul Arriola is now a constant for the USMNT. Tyler Boyd is the program’s fastest-rising new star. Against Jamaica, Jordan Morris made his case for a significant role. This is where width, service, and the chance for combinations with Pulisic and the lone striker, be it Jozy Altidore or Gyasi Zardes, come from.

It’s also a key spot for Tata. His focus on wide play has elevated the LA Galaxy’s Uriel Antuna from the fringes of the player pool to Mexico’s second-leading scorer in this tournament. Rodolfo Pizarro was a thorn in the side of MLS teams in Monterrey’s run to the Concacaf Champions League title earlier this year. Now he’s climbing into a regular role for El Tri. Roberto Alvarado is another youngster getting his chances under Martino and could yet prove a wild card in the big moment.

Will wingers be role players on Sunday, setting the stage for others? Or will one or two grab the spotlight themselves? It’s one of the biggest questions and could determine who lifts the trophy at night’s end.