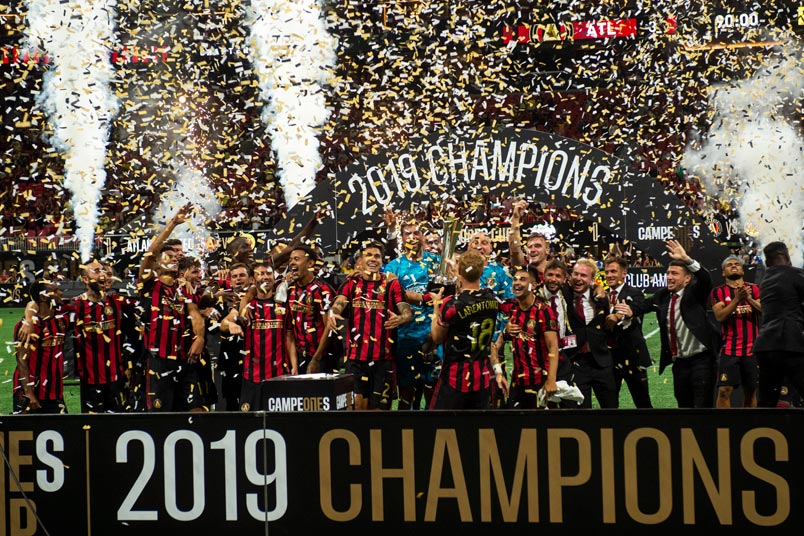 The soccer news starts with Atlanta United winning the second edition of the Campeones Cup. The MLS Cup champions beat Club America, the Liga MX Campeon de Campeones holders, 3-2 in front of an announced crowd of 40, 128 at Mercedes-Benz Stadium. The result and the quality of the game could help turn the Campeones Cup into an important date on the MLS and Liga MX calendars.

“Plain and simple, it was fun. It was a fun night,” Larentowicz said. “It was an exciting night. For the neutrals, it was probably extremely exciting. For the fans on both sides, it was exciting. From the anthems to the end of the game, it kind of had that feeling of spectacle, for sure.”

Since there was no chance of MLS staying out of its own way and highlighting the Campeones Cup, there were other games on the schedule. Orlando shutout Sporting KC 1-0 at home. Tesho Akindele scored in the 21st minute with Brian Rowe making three saves to keep the clean sheet.

“Outside of the goal they scored, they really didn’t have much in the game,” Sporting coach Peter Vermes said. “We had two very very good chances, one right on the door step. Unfortunately, we don’t put it in and we leave with nothing.”

Real Salt Lake shutout Seattle 3-0 at Rio TInto Stadium. Sam Johnson scored in the 25th. Albert Rusnak made it 2-0 in the 71st with Corey Baird scoring in the 87th minute. Damir Kreilach assisted on both goals with Seattle finishing without a shot on target.

The LA Galaxy shutout FC Dallas 2-0 at home. Zlatan Ibrahimovic scored in the 68th and converted an 82nd minute penalty. David Bingham kept the clean sheet with one save.

Portland beat Chicago 3-2 at BMO Field. Jorge Moreira opened the scoring for the Timbers in the 11th minute with Brian Fernandez doubling the lead in the 21st. Chicago went a man down in the 30th with a red card to Aleksandar Katai for a serious foul. Brian Fernandez made it 3-1 Portland in the 88th with CJ Sapong scoring for the Fire two minutes into stoppage time.

“Yes, we created many opportunities,” Portland coach Gio Savarese said. “Many, many opportunities, but these are the moments where we have to take advantage. We have to be that team, in that moment that has to make sure we don’t let them do anything. We have to just make sure that they give up. This was the type of game that I think if we do the things that we can do, there’s no reason why we have to suffer all the way until the end.”

In the Canadian Championship, Toronto FC shutout Ottawa 3-0 at home to take the semifinal series 5-0 on aggregate. Nick DeLeon scored in the 14th minute and assisted on Patrick Mullins’s goal in the 37th. DeLeon scored again in the 39th minute. Montreal won 1-0 at Calvary FC to win that series 3-1 on aggregate. Anthony Jackson-Hamel scored in the 13th minute with Clement Diop making three saves to keep the clean sheet.

Christian Pulisic subbed out in the 74th minute in Chelsea’s UEFA Super Cup loss to Liverpool. The game finished 1-1 in regulation and 2-2 after extra time with Liverpool winning 5-4 on penalties. Oliver Giroud scored for Chelsea in the 36th with Pulisic setting up the goal. Pulisic had a goal overturned by VAR in the 40th minute. Sadio Mane equalizing for Liverpool in the 48th minute. Mane scored again in the 95th minute with Jorginho equalizing from the penalty spot in the 101st. Chelsea failed to convert their first penalty with Liverpool scoring with all five of their attempts.

“I don’t like losing,” Chelsea manager Frank Lampard said. “I’m a terrible loser and we all are at Chelsea. We wanted to win this game but we were unfortunate so I’m happy with the players. If that’s a sign of what we can do this season, and we will get better, then it’s a really good sign.”

The Independent’s Miguel Delaney on what Chelsea showed at the Super Cup. Pro Soccer USA’s Manuel Veth’s USMNT centered preview of the 2019-20 Bundesliga season. AP’s Rob Harris reports that UEFA will hold off on deciding the future of the Champions League.

The St Louis Post-Dispatch’s Ben Fredrickson reports that MLS is close to announcing St Louis as the next expansion market.