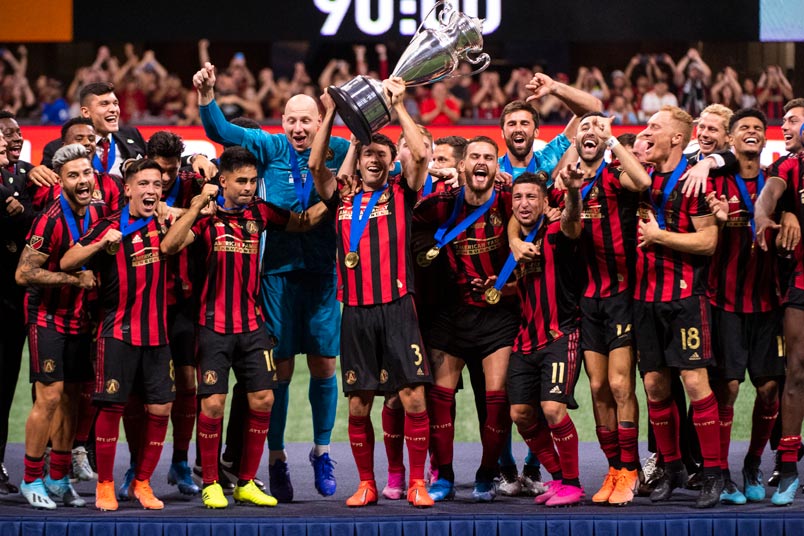 The soccer news starts with Atlanta beating Minnesota 2-1 at home to win the 2019 US Open Cup. An own-goal put Atlanta up in the 10th minute with Pity Martinez scoring in the 16th. Robin Lod scored for Minnesota in the 47th. Atlanta went a man down with a red card to Leandro Pirez in the 74th minute. An announced crowd of 35,709 sets a new record for a US Open Cup final

“I think the goal so early in the second-half was probably more of an obstacle than the sending off,” Atlanta goalkeeper Brad Guzan said. “When you concede the goal so early, you know the saying goes, 2-0 is the worst lead in soccer, and you can see when you give them hope, and you’re on the back foot, and now, they’re all over it. You know, so the red card, we knew it was always going to be a tough stretch, the last 10-15 minutes regardless if we had 10 or 11 men. So that part was good, a little bit of luck late on, and we’ll take it.”

MLSsoccer’s Matthew Doyle on the Open Cup final. The Atlanta Journal-Constitution’s Doug Roberson’s report from Atlanta’s second trophy this month. The Star-Tribune’s Jerry Zgoda with Minnesota’s issues playing from behind in the cup final.

Also in the soccer news, the English Football League officially withdrew Bury FC’s membership, meaning the club is no longer a member of the league structure. The decision came after the club couldn’t find a buyer. The decision reduces League One to 23 teams this season. The Football League hadn’t allowed Bury to play its scheduled games this season due to a lack of senior players in the squad.

“Today is undoubtedly one of the darkest days in the League’s recent history,” Football League chairperson Debbie Jevans said in a press statement. “The EFL has worked determinedly and tirelessly to avoid this outcome and it is with a heavy heart that this situation has been forced upon us. The EFL has to place the integrity of our competitions at the heart of every decision we make, and we simply cannot allow this unacceptable situation to continue or countenance the prospect of postponing further fixtures.”

The Guardian’s David Conn explains the financial issues with Bury. Reuters’ Simon Evans reports that Bury can’t appeal the EFA decision. The Athletic’s Simon Hughes on the financial situation at Bolton who now have 14 days to solve its issues. The Totally Football League Show’s Nick Miller uses Bury and Bolton to make a wider point about club finances across English soccer. FourFourTwo’s Kieran Maguire asks about a salary cap in the Football League.

In the second round of the League Cup, Luca de la Torre subbed out in the 90th minute for Fulham’s 1-0 loss to Southampton at Craven Cottage. The game’s only goal came in the 57th minute. Duane Holmes’s Derby County lost 3-0 at Nottingham Forest.

Cameron Carter-Vickers’s Stoke City advanced 5-4 on penalties after drawing 2-2 at Leeds United. Danny Bath scored for Stoke in the 39th minute with Sam Vokes doubling the lead in the 44th. Leeds came back with goals in the 67 and 81st minutes. Leeds failed to convert in the first round of penalties. Carter-Vickers saw yellow in the 60th.

The MLSPA mourns the tragic loss of former player and great friend Colin Clark. We extend our deepest sympathies to his family and loved ones, particularly his son Tyce. pic.twitter.com/4VeRrWS94r