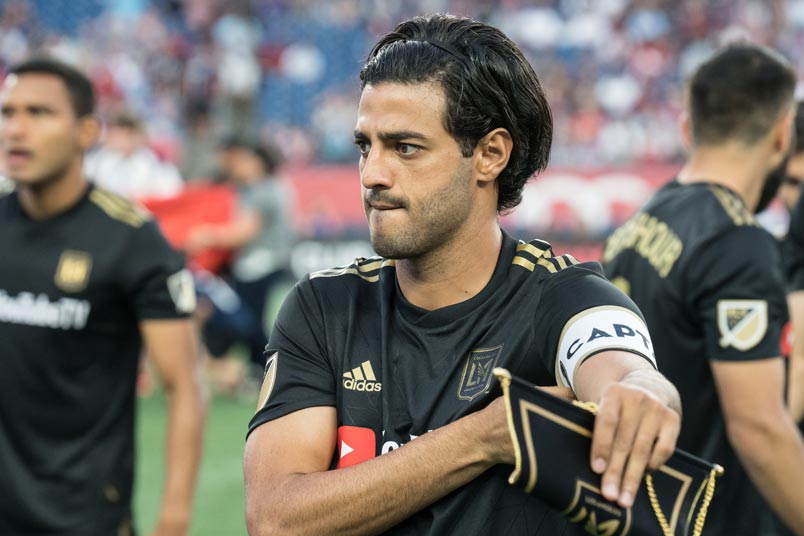 By Luis Bueno – RIVERSIDE, CA (Aug 28, 2019) US Soccer Players – Carlos Vela has been having himself a season. The LAFC talisman has shattered MLS records and dominating opponents and is likely to win the league’s Most Valuable Player award.

Aside from his 27 goals and 15 assists though it was his team’s performance in last weekend’s LA derby that makes his MVP case stronger. With the game in the balance, Vela stepped off due to injury. His LAFC teammates all but stepped off too.

Half an hour left against their biggest rivals set the stage for an epic come-from-behind victory. However, a Vela-less LAFC was unable to finish the job. While the two LA teams left Banc of California Stadium with one point apiece, the chance for more was there for the taking.

The onus is on the coaching staff to keep Vela healthy, more for the long term (the MLS Cup playoffs) than the short term (September and October). After all, in clutch moments without Vela, LAFC looked leaderless.

The most critical moment for LAFC came on Sunday. LAFC came up short. Consider the magnitude of the game. The Galaxy has been LAFC’s nemesis since that fateful game in March 2018, when LAFC had the chance to throttle the Galaxy and set the tone for the new rivalry. Instead, LAFC turned a 3-0 lead into a 4-3 loss. The Galaxy has been in LAFC’s minds ever since.

With a 2-0-2 edge in the all-time series, the Galaxy came in, got an early goal, then scored two goals one minute apart and had its foot on LAFC’s throat. LAFC kept fighting and clawed its way to a second goal before the intermission then leveled terms when Vela himself buried a ball in the back of the net. Injury though was the great equalizer on the night as a pesky hamstring issue forced Vela off the field.

LAFC was unable to maintain momentum and unable to land the death blow. With its leader gone and the team’s biggest rivals wobbling on the ropes, nobody stepped up. Latif Blessing had a brace, Diego Rossi had some looks. Newcomer Brian Rodriguez looked dangerous. Nobody was able to put a goal away and give LAFC the win.

Vela’s health status is certainly a storyline to follow. Vela has been a bit of an ironman this season. He has missed just one match, although he was dressed and available for a July 12 encounter at Houston that finished in a 3-1 victory for LAFC. Vela has taken a beating this season as teams typically unload on him physically in an attempt to slow him down.

Over the short term, time missed due to injury would not cripple the team. LAFC has a record any team would be proud of at 19-3-5 for 62 points. Without Vela, the team would still be in line for the Supporters’ Shield. The most difficult opponent left on the schedule is Philadelphia away on September 14. LAFC also has to play host to and visit Minnesota. Still, LAFC is 14 points clear of Atlanta in the Supporters’ Shield standings and 18 clear of Real Salt Lake and Seattle in the Western Conference table.

For securing home-field advantage in the Western Conference and wrapping up the Supporters’ Shield title, Vela is a luxury.

In the long term though, losing Vela would be a massive blow. Vela’s value goes beyond his 27 goals and 15 assists. Other players feed off his energy and his deft passes. LAFC’s attack is the league’s best, and perhaps the league’s all-time best, because of Vela. Of course, others are putting the ball in the back of the net. Blessing’s two goals against the Galaxy were clutch. Rossi has 14 goals, which would be good enough to lead all but three MLS teams at this point of the season. Adame Diomande is two goals away from hitting double digits, which itself is a feat that only a handful of other MLS teams have accomplished, having three players score at least 10 goals in one season. Uruguayan newcomer Rodriguez joins Blessing and Christian Ramirez in a deep frontline that would strike fear in any defense.

Still, LAFC managed Vela well during the Galaxy match. Even though Vela was upset after he was taken off, rest was important in the moment and rest might be important down the stretch. If Vela misses a game here and there, it will allow his hamstring to recover for the postseason.

Perhaps it is Rossi who will fill that role. Or Blessing. Or Diomande. Or Mark-Anthony Kaye. Somebody needs to raise their hand and be that player.

If the standings following the LAFC vs Galaxy match hold, LAFC could face their rivals in the semifinals. Somebody would certainly have to step up then, with or without Vela.

LAFC has had an impressive record-breaking season and is still not done rewriting some league records. It’s the clutch moments that define seasons. Vela is LAFC’s clutch player. What happens without him?