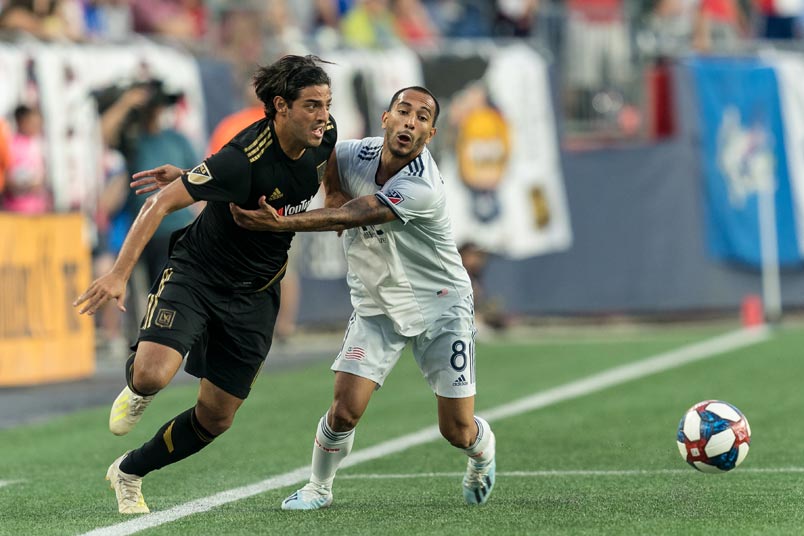 By Luis Bueno – RIVERSIDE, CA (Aug 14, 2019) US Soccer Players – It’s a long list of Mexican players who have played in MLS, but that list is a bit of a hodgepodge collection of talent. While there have been some big-name players, many of those big names were past their prime by the time they arrived in the league. Not Carlos Vela.

The Mexican international scored his 23rd goal of the season in LAFC’s latest rout, a 4-2 win over the New York Red Bulls on the weekend. That gives him a career total of 37 in 51 regular season MLS games. That figure sets him apart from all of his countrymen. Vela is now the all-time leading goal scorer among Mexican-born MLSers.

Vela though is piecing together one of the finest MLS seasons of any player ever, regardless of nationality. With his goal count and LAFC’s overall record pace, Vela is the clear frontrunner for MLS Most Valuable Player.

Personal accolades are one thing, but Vela is in the midst of something far more greater. Vela could be in the midst of building a legacy. If he continues his torrid pace and helps LAFC win MLS Cup, Vela will go down as having had not only one of the best individual seasons in league history but will take a step toward joining the pantheon of all-time MLS greats. On the flip side, if LAFC crashes and burns before hoisting silverware at the end of the season then Vela’s season will be nice but little more.

It would be a shame if this season did not culminate in a trophy for Vela and LAFC. Vela is on pace for ridiculous numbers. He’s already tied the league record for individual points in one season. Vela has 23 goals and 15 assists through 23 games, equaling Sebastian Giovinco’s total from 2015 (22 goals, 16 assists). Giovinco set his mark over 33 games, which means Vela should shatter the record and set a highwater mark that others may not touch in years.

Atlanta’s Josef Martinez set the new single-season scoring record just last season with 31 goals. Vela needs nine goals to break that mark. While it may not seem plausible to expect nine goals in 10 games, the way LAFC’s attack has played throughout this season, nine goals may be within reach. Vela has gone just six games without a goal. Additionally, in his last 10 games, he has scored 10 goals.

One record that may be out of reach though is the single-season assist record. Vela needs 11 assists to equal Carlos Valderrama’s mark of 26, set in 2000. However, Vela needs just five to join an exclusive group. Only Valderrama and Sacha Kljestan have at least 20 assists in one season. Kljestan had 20 assists in 2016.

Vela’s goals and assists are also helping LAFC collectively threaten records. The 1998 LA Galaxy is the only team in league history to score more than 80 goals. Only six other teams have scored 70 or more goals, with DC United the highest of that group with 75 goals scored in 1998.

LAFC has 65 goals this season and could reach the 70-goal mark before the month is out. If LAFC continues its torrid pace, the club will reach 70 goals against the Galaxy on August 25 and would finish the season with 92 goals, unfathomable numbers even for this LAFC team.

Vela’s goal against New York Red Bulls on the weekend gave him 23 goals on the season, three more than Atlanta’s Martinez. It also gave him 37 goals in his year-and-a-half MLS career. The figure surpassed Erick “Cubo” Torres’s career total. When Torres broke through with Chivas USA, it seemed as if he would become a star in the league. That was not how his career path turned out, despite having left MLS in 2017 as the league’s all-time leading scorer of Mexican descent.

It’s more than goal scoring. Cuauhtemoc Blanco probably had the greatest impact on the league during his time here. He turned the Chicago Fire into an instant contender and held the league’s attention at a time when all of MLS had goo goo eyes over David Beckham.

Luis Hernandez also had an impact, although it was not the most positive one. Still, Hernandez’s arrival with the LA Galaxy in 2000 seemed at the time a bit of a coup. Other name Mexican internationals to play and succeed in MLS include Jorge Campos, Claudio Suarez, and Carlos Hermosillo.

The difference between them and Vela though is his age. Vela came at a time that he could still have pulled down a salary in Europe as he just turned 30 this year. Vela is very much in his prime and still has plenty left in the tank.

Now, it’s what he can do once the postseason hits that will determine his standing in the league. Both Giovinco and Martinez each won a league championship.

Vela’s fine individual season will likely pay off in the first piece of silverware for LAFC. With 55 points on the season, LAFC sits 10 points clear in the race for the Supporters’ Shield. Philadelphia has 45 points. Atlanta at 42 is the only other team with more than 40 points so far this season.

Winning the Supporters’ Shield is indeed an accomplishment, but that only serves to decorate a team’s mantle. MLS Cup is the point in this league. Vela needs to play in that match and walk away a winner if this season will truly be one of the league’s all-time great campaigns.