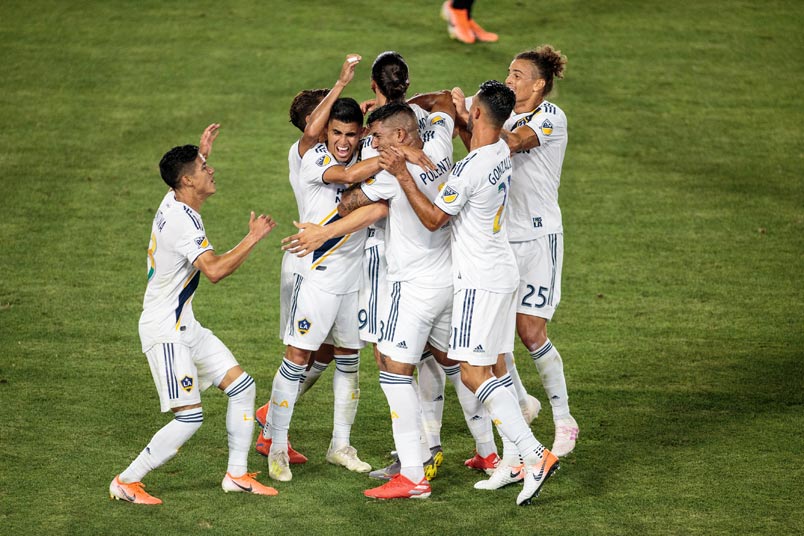 By Luis Bueno – RIVERSIDE, CA (Aug 7, 2019) US Soccer Players – The best way to wake up the LA Galaxy is by having another team in Los Angeles and having that team succeed. When that other LA team is open to spending cash on incoming players, both teams improve and by extension so too does MLS.

With the transfer deadline set to close on Wednesday, both LA teams have been buyers, trying to add some expensive talent to better their respective squads. The Galaxy’s pursuit of Boca Juniors’ Cristian Pavon and LAFC’s chase of Penarol’s Brian Rodriguez are each expected to culminate before the deadline closes. Both multimillion-dollar pursuits will improve the level of play for both sides now and in the future. They also signal the commitment level for both teams, which is bound to reverberate across the league.

LAFC has been atop MLS since the start of the season. The Galaxy has had its share of peaks in 2019 as well. Neither side is content with standing pat. It’s that desire and mindset that will help keep LA soccer atop MLS and will force the rest of the league to react in order to keep pace.

Of course, LAFC is seemingly following Atlanta United’s lead. Atlanta, after all, came into MLS throwing cash around as if it were trying to create a rainstorm, spending $8.5 million on Miguel Almiron and then roughly $15 million on Ezequiel Barco. The LA teams have also dropped substantial amounts on players such as Carlos Vela ($5.8 million) and Giovani Dos Santos ($7 million) but Atlanta cresting the $10 million mark did set a new bar. If anything though LA teams, specifically the Galaxy, created that bar in the first place by chasing after big-name talent and winning MLS Cups because of it.

Whether or not Pavon will help the Galaxy get back to MLS Cup remains to be seen. The team did have to clear some space to accommodate Pavon. Fan favorite Ema Boateng is off to DC United while Jorgen Skjelvik who pulls down $1 million in salary is rumored to be heading to Sweden’s Hammarby.

By acquiring Pavon the Galaxy would be trying to keep pace with LAFC. The Galaxy is likely tired of seeing LAFC succeed and steal headlines in Los Angeles. It is no coincidence that the Galaxy’s leanest year came when the team had no other LA team to fight against. While 2006 was pretty rough, 2017 was an embarrassment. It was also the last year where the Galaxy was the only show in town.

We saw a similar response from the Galaxy when Chivas USA arrived in MLS. The Galaxy had suffered through some lean years, collapsing against San Jose in the 2003 playoffs and then crashing out of the playoffs against Kansas City in 2004. The club welcomed Chivas USA into MLS by acquiring Landon Donovan and winning the MLS Cup. Last season, theu welcomed LAFC by acquirng Zlatan Ibrahimovic. They debuted him against LAFC and saw him score two goals in a come-from-behind 4-3 win, forever etching his name into LA Galaxy lore.

The Galaxy responded in a big way to new teams coming into MLS, but this time around the opposing club has responded in kind. LAFC’s reply to the Galaxy signing Jonathan Dos Santos was landing Vela, a better and more successful Mexican international. Chivas USA though never really responded, not to Donovan’s arrival, not to David Beckham’s arrival, and not to Robbie Keane’s arrival. The club’s penny-pinching ways eventually led to its downfall.

LAFC of course is not Chivas USA. They continue to spend money to try and win MLS Cup and stay atop the Western Conference. If any city is going to throw money at incoming transfers, it will be LA. That much is evident in these most current arrivals

Pavon and Rodriguez are not exactly household names. Pavon did play for Argentina’s World Cup. While he has done some fine things with Boca Juniors as well, he is not a name South American coming to boost the Galaxy off the field. Rodriguez meanwhile just turned 19 and plays for Uruguayan side Penarol. That’s one of Uruguay’s two most storied clubs but nowhere near as well-known outside of its country as Boca Juniors. Regardless, LAFC is reportedly throwing $11.5 million cash Penarol’s way to acquire Rodriguez.

This is just the latest example of LA teams to trying to one-up each other. Most recently, the trend is alive in the NBA. While the Los Angeles Lakers still dominate Angelenos’ hearts, the Los Angeles Clippers have been the more successful of the teams over the last decade. Fed up with losing and watching the Clippers reach the playoffs, the Lakers acquired LeBron James before last season. While James did not help get the Lakers back into the playoffs, it did force the Clippers to react in kind. They acquired prized free agent Kawhi Leonard in the offseason, after Leonard helped the Toronto Raptors win their first NBA title. Spurned by Leonard during free agency, the Lakers instead traded for Anthony Davis, the top pick in the 2012 NBA Draft and a six-time NBA All-Star.