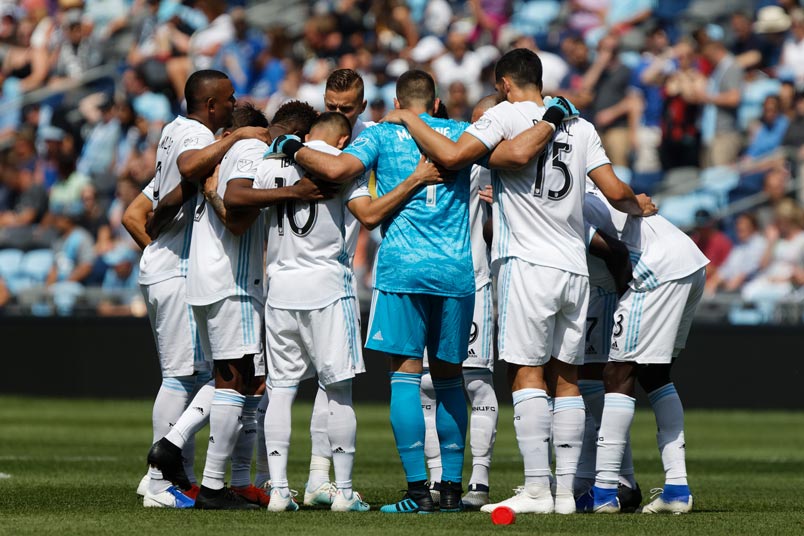 MLS Week 22 started with a big event for the league. Atlanta set a new single-game attendance record. 72,548 were at Mercedes-Benz Arena to see Atlanta shutout the Galaxy 3-0. It was an odd win for United with none of the goals coming from the run of play. An own-goal opened the scoring in the 23rd with another own-goal doubling the lead in the 43rd. Josef Martinez converted a penalty in the 72nd minute to finish off the Atlanta goals. United goalkeeper Brad Guzan made four saves to keep the clean sheet.

“I thought it was important for us to bounce back after last week,” Atlanta midfelder Jeff Larentowicz said. “The Galaxy are always a difficult team with a lot of talent. Today we caught them without a few important players. That didn’t matter. I think we wanted to go out and push the tempo. I thought we did that for 90 minutes and we deserved to win in the end.”

New York shutout Toronto FC 2-0 at Red Bull Arena. An own-goal opened the scoring in the 55th. Toronto went a man down in the 89th minute with a red card to Justin Morrow for denying an obvious goal scoring opportunity. Kemar Lawrence scored for the Red Bulls a minute into stoppage time. New York goalkeeper Luis Robles made three saves to keep the clean sheet.

LAFC shutout New England 2-0 on the road, ending the Revolution’s undefeated streak under new coach Bruce Arena. Diego Rossi scored in the 8th minute and Latif Blessing in the in the 72nd with Jordan Harvey assisting on both goals. LAFC goalkeeper Tyler Miller made one save to keep the clean sheet.

“The better team won the game. No question about that,” Arena said. “I think for us to have a chance to get a result in this game, we had to do better with some of the potential goal scoring opportunities we created, and we just wasted a number of opportunities tonight. Had a breakaway, had a couple of runs at goal where we had a man advantage and didn’t make the right play. So, that was our theme in the attacking part of the field. I think in the middle third of the field, they dominated the game.”

Vancouver came back to beat Cincinnati 2-1 at Nippert Stadium. Allan Cruz put Cincinnati up in the 6th minute with Hwang In-Beom equalizing in the 41st. Felipe scored Vancouver’s winner in the 84th minute.

Colorado came back to beat Montreal 6-3 at Dick’s Sporting Goods Park. An own-goal put Colorado up in the 18th with Montreal getting an own-goal equalizer in the 21st. Kei Kamara converted a penalty to make it 2-1 Rapids in the 36th, scoring again a minute into first-half stoppage time. Diego Rubio made it 4-1 Colorado four minutes into first-half stoppage time. Maci Urruti pulled a goal back for the Impact in the 55th. A 76th minute Saphir Taider penalty brought Montreal within a goal at 4-3. Colorado responded with an Andre Shinyashiki goal in the 76th and Kamara finishing off his hat-trick in the 90th minute.

“Wild, wild game,” Rubio said. “We tried to press them and they found a goal. They were trying to look for crosses, they had a lot of corners, and they found those goals. We had a good mentality, we kept going forward and we found our chances and scored.”

“It was very important in an important moment for us,” Nikolic said. “We are in the last part of the season and we are in the situation that we don’t have control in our hands. We need to collect points, on the road, home games. So, yeah, it was a really, really important win for us.”

Real Salt Lake came back to beat NYCFC 3-1 at Rio Tinto Stadium. Alexander Ring scored for NYCFC in the 4th minute with Jefferson Savarino equalizing in the 37th. Albert Rusnak put RSL ahead for good in the 75th with Nick Besler scoring in the 88th minute.

San Jose and Columbus finished 1-1 at Avaya Stadium. San Jose’s Magnus Eriksson converted a penalty in the 42st with Gyasi Zardes equalizing in the 65th minute. San Jose put five shots on goal to the Crew’s one.

“I think both team are dealing with a couple different challenges,” Minnesota defender Ike Opara said. “I think luckily for Portland they don’t have to travel, they can just stay here and maybe they can get a little used to the environment our field and our fans so it shouldn’t hit them as much of shock. For us, obviously we have a lot of games coming up that we need to prioritize moving forward with Wednesday and some restrictions in the open cup with the internationals you can have so I think we are going to be juggling a couple things ourselves.”

Philadelphia beat DC United 5-1 at Audi Field. Alejandro Bedoya opened the scoring for the Union in the 3rd minute. DC United’s Junior Moreno saw red in the 40th minute for denial of an obvious goal scoring opportunity. Marco Fabian doubled the Philadelphia lead two minutes into first-half stoppage time. Kacper Przybylko made it 3-0 Union in the 52nd. DC’s Federic Brillant pulled a goal back in the 54th minute, but that was it for the United offense. Fabian scored again in the 70th with Fabrice Picault finishing off the Union goals in the 90th minute.

Week 22 ended with Sporting KC beating Seattle 3-2 at CenturyLink Field. Felipe Gutierrez put Sporting up in the 12th minute and converted a penalty in the 33rd. Jordan Morris pulled a goal back in the 46th. Erik Hurtado made it 3-1 Kansas City in the 58th. Morris scored again in the 82nd minute.