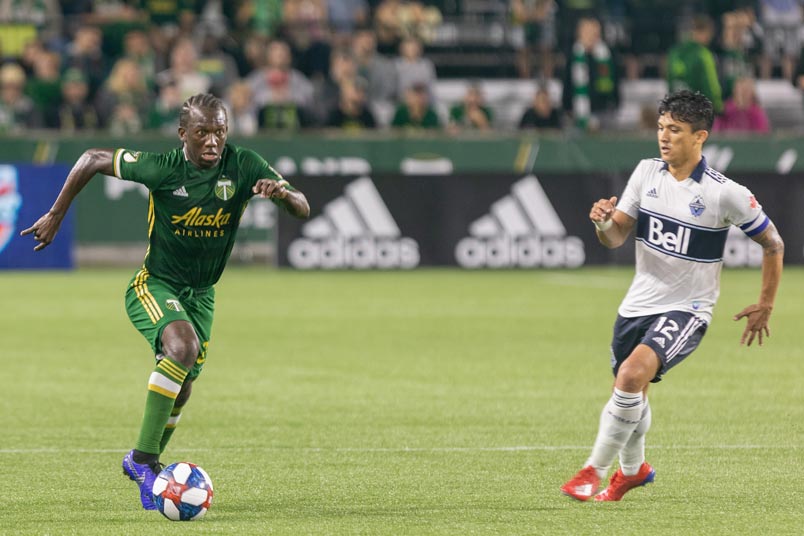 Week 23 of the 2019 MLS season resumed with the Seattle Sounders and New England Revolution drawing 3-3 at CenturyLink Field. Harry Shipp scored for Seattle in the 2nd minute. New England’s Michael Mancienne equalized in the 27th with Gustavo Bou putting the Revs up in the 35th. Shipp equalized for the Sounders in the 65th with Nicolas Lodeiro scoring in the 66th. A Carles Gil penalty leveled the score in the 87th minute.

Columbus came back to draw 2-2 with Cincinnati at MAPFRE Stadium. Darren Mattocks opened the scoring for Cincinnati in the 16th minute with Emmanuel Ledesma doubling the lead in the 23rd. Gyasi Zardes converted a 45th minute penalty for the Crew with Pedro Santos equalizing in the 62nd.

Toronto FC drew 1-1 with Orlando City at BMO Field. Benji Michel scored for Orlando in the 69th minute with Patrick Mullins equalizing in the 77th.

FC Dallas came back to beat Minnesota 5-3 at home. Ethan Finlay put United up in the 11th minute with Ryan Hollingshead equalizing in the 28th. Santiago Mosquera scored for Dallas in the 32nd with Finlay equalizing in the 41st minute. Reggie Cannon made it 3-2 Dallas in the 45th with Hassani Dotson equalizing in the 73rd minute. Brandon Servania put Dallas up for good with goals in the 85th and three minutes into stoppage time.

Real Salt Lake came back to win 2-1 at Sporting Kansas City. Johnny Russell scored for Sporting in the 31st minute with Corey Baird equalizing in the 38th. Baird scored again in the 70th minute. Soprting’s Daniel Salloi saw red in the 84th for a serious foul.

“My first thought is that we don’t deserve it,” Sporting midfielder Ilie said. “I think we played much better than Salt Lake. At least we wanted to play. But we knew before the game how the game was going to be like. Again, the wrong attitude in the wrong moment of the game gave us another loss here at home. If we want to make a run and get into the playoffs, we can not miss many more opportunities. It has to start in Orlando on Wednesday.”

“Very important obviously,” Schweinsteiger said. “I always say, when there’s a will there’s a way. We fought until the end. It wasn’t an easy game to play, especially when they tied. We are very happy that we kept the three points.”

“How many clear chances did we have in the first half?,” San Jose coach Matias Almeyda asked. “Three hit the post, three plays right next to the goal. That’s a lot in soccer. Finishing is fundamental.”

Philadelphia beat Vancouver 3-1 at home. Sebastian Blanco put the Union up in the 28th with Theo Bair equalizing in the 38th. Marvin Loria scored for Portland in the 55th with Blanco assisting. Jeremy Ebobisse finished off the Timber goals in the 90th minute.

“We played a very good match tonight,” Loria said. “We were fast, had possession of the ball for a long time and attacked a lot, and that helped us win tonight’s match while executing our strategy.”

Philadelphia beat Houston 2-1 at home. Kacper Przybyklo put the Union up in the 18th minute with Christian Ramirez equalizing in the 42nd. Jack Elliott scored Philadelphia’s winner in the 78th minute.

DC United beat the LA Galaxy 2-1 at Audi Field. Paul Arriola opened the scoring for DC in the 28th minute with Favio Alvarez equalizing in the 48th. Lucas Rodriguez scored for DC in the 73rd minute.

Week 23 ended at Banc of California Stadium with LAFC beating the Red Bulls 4-2. Jordan Harvey put LAFC up in the 23rd minute with Latif Blessing doubling the lead in the 25th. Cristian Casseres pulled a goal back for New York in the 42nd with an own-goal leveling the score in the 45th. Carlos Vela converted a 61st minute penalty for LAFC and assisted on Eddie Segura’s goal in the 72nd.