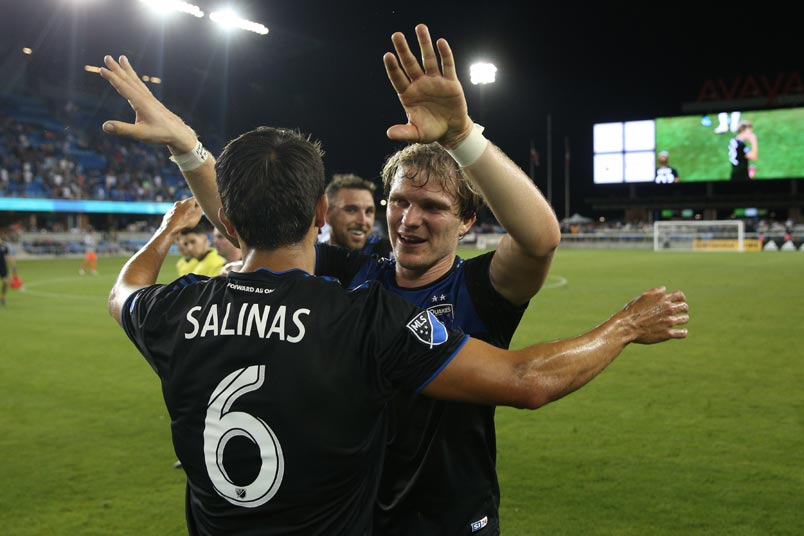 Week 25 of the 2019 MLS season saw San Jose set a new shots taken record at a remarkable 43. The Earthquakes came back to beat Vancouver 3-1 at Avaya Stadium. Jakob Nerwinski scored for San Jose in the 6th minute with Judon equalizing a minute later. After assisting on the Judson goal, Chris Wondolowski put the Earthquakes up in the 34th with Andres Rios scoring in the 73rd. With the Earthquakes putting 19 of those 43 shots on goal, Vancouver goalkeeper Maxime Crepeau now holds the MLS single-game saves record with 16.

“I think it’s an important result just because we’re playing at home and we wanted three points, we believed we can get three points,” San Jose midfielder Shea Salinas said. “I don’t know about momentum. We were still confident in the team we were able to be and we were able to show that tonight.”

“Obviously very disappointed,” Orlando City coach James O’Connor said. “I think when you look at the game overall, I think we’ve had enough chances to win, in two or three games. I think unfortunately for us tonight, we’ve played very well, we’ve had exceptional chance creation, we just weren’t able to take our chances which is pretty hard to swallow. Very painful evening for us.”

Seattle beat Portland 2-1 at Providence Park. Cristian Roldan put the Sounders up in the 22nd with Raul Ruidaz scoring in the 47th. Diego Valeri pulled a goal back for the Timbers in the 54th minute.

“Well look, it’s important for the fans,” Seattle coach Brian Schmetzer said. I’m a fan, so I love the fact that this was the first time since 2006, 2007, in the USL that the Sounders won back-to-back Cascadia Cups. So look, the rivalry between the three franchises is a very big one. It’s something that we take seriously, I know that the fans take it seriously. So, I’m very happy, you know I got to hug three of the fans that were down on the field, look at the Cup, guys were happy so it was a big deal.”

On Saturday, NYCFC came back to beat the Red Bulls 2-1 at Yankee Stadium. Alex Muyl scored for the Red Bulls in the 10th minute with Maxi Moralez equalizing from the penalty spot in the 43rd. Heber scored NYCFC’s winner in the 53rd minute. NYCFC’s Ronald Matarrita saw red in stoppage times for violent conduct.

“Oh, we scored more goals than they did. That’s how we did it,” Revs coach Bruce Arena said. “It was a battle. I think they played real hard and they made the game difficult for us.”

Philadelphia beat DC United 3-1 at home. Kacper Przybylko scored in the 5th minute, assisting on Brenden Aaronson’s goal in the 16th and Ilsinho’s goal in the 36th. Luciano Acosta scored for DC in the 56th minute.

Toronto came back to beat Montreal 2-1 at BMO Field. Bojan scored for the Impact in the 49th minute. Marco Delgado equalized for Toronto in the 63rd with Justin Morrow scoring in the 81st minute.

Sunday’s schedule started with Columbus beating FC Cincinnati 3-1 at Nippert Stadium. Gyasi Zardes scored in the 22nd and 23rd minutes with Luis Diaz making it 3-0 Crew a minute into stoppage time. Kekuta Manneh scored for Cincinnati in the 89th minute.

FC Dallas had no issues with the Houston Dynamo, winning 5-1 at home. Reto Ziegler converted a 24th minute Dallas penalty with Jesus Ferreira doubling the lead in the 29th. Zdenek Ondrasek added goals in the 56th and 64th minutes. Memo Rodriguez scored for Houston in the 80th. Michael Barrios finished off the Dallas goals six minutes into stoppage time.

Week 25 ended in Los Angeles with LAFC coming back at home to draw 3-3 with the Galaxy. Zlatan Ibrahimovic scored for the Galaxy in the 2nd minute with Latif Blessing equalized in the 12th. Ibrahimovic scored again in the 15th with Cristian Pavon making it 3-1 in the 16th. Blessing got LAFC’s second goal in first-half stoppage time. Carlos Vela equalized in the 53rd.