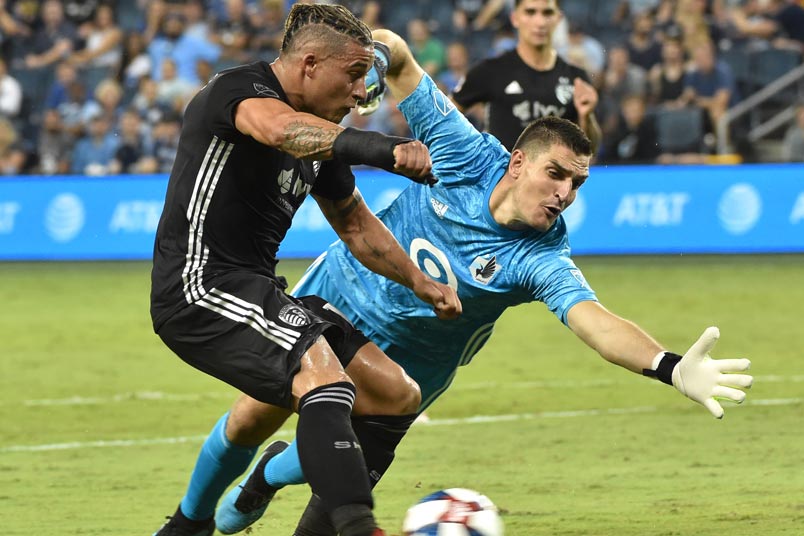 By Clemente Lisi – NEW YORK, NY (Aug 26, 2019) US Soccer Players – Although MLS is a fairy new league, it and its fans have worked to build up rivalries. The notion of a Rivalry Week may feel contrived. Still, more often than not, it does its job in generating wider interest. It's more than a marketing strategy. Since these games come in late summer, they go a long way in gauging the health of teams.

They also go beyond bragging rights. What rivalry week does is give us a snapshot of where teams are in the playoff picture with games that count a little more. Among the highlights were the always-heated I-95 battle between DC United and New York Red Bulls, all-Canadian drama pitting Montreal Impact versus Toronto FC, Portland hosting Seattle, and the latest installment of LAFC vs the Galaxy.

These games, for the most part, mattered. This is a league of parity with most teams in playoff contention. Though most might already have LAFC penciled in as the likeliest MLS Cup winners, imagine if they have to get past the Galaxy in the playoffs. That's what rivalry week does, setting up some of the best games the league has to offer. With three-quarters of the season complete, here are five things we learned from the final MLS Rivalry Week of the season and how it can impact the rest of the regular season.

LAFC the team to beat

No surprise here, with LAFC already in the playoffs and the easy pick for winning the Supporters' Shield. They clinched that playoff spot earlier than any team in MLS history. The expectations are obvious for LAFC. What that means now is remaining consistent.

Part of that is shaking off the legacy of previous Supporters' Shield winners. There's no direct connection between finishing with the best record in MLS and lifting MLS Cup. That may not be on the minds of LAFC given how well they've played this season. Teams like this tend to focus on the next game. The one they just drew with the Galaxy tells part of their story. 3-1 down at home, it was LAFC taking control to get the point. This is a team that has talent at every position. The team showed that days earlier against the San Jose Earthquakes, trouncing them 4-0 with Carlos Vela continuing to lead the way. Remaining consistent may be LAFC's biggest obstacle this fall.

Atlanta returned to form this summer. After a poor start, the defending MLS Cup champions have impressed. Winning the Campeones Cup with a shot this week at the US Open Cup means this is a team aiming to win all the silverware in its path.

United collected its sixth-straight road win in all competitions on Saturday. They beat Orlando City SC 1-0 to maintain a hold of first place in the Eastern Conference. Josef Martinez scored the game winner, surprising nobody. The striker has 22 goals in MLS this season, second only to Vela.

No list would be complete without the New York Red Bulls. A team known for strong regular seasons and then flopping in the playoffs, the Red Bulls are sleepwalking through the season this year. There isn't anything notable about this side that's positive. On top of that is a defense that needs repair.

The Red Bulls' 2-1 win against DC United to open Rivalry Week last Wednesday was an indication that this is a side willing and capable of battling for a decent playoff seeding. Rivalry Week, however, highlighted the team's inconsistency. NYCFC got the better of them in the Hudson River derby, posting a 2-1 win on Saturday night after the defense failed to defend the lead.

The Loons lost a heartbreaker to Sporting Kansas City, 1-0 on an Ike Opara goal with just two minutes left in the game. Overall, they have nothing to be ashamed of. Adrian Heath's club has had a wonderful season and could very well finish as high as second in the Western Conference.

Minnesota should make the playoffs for the very first time. Heath's revamped defense has helped the team's fortunes this summer with goalkeeper Vito Mannone among the best in the league. However, the offense remains weak. Scoring just two goals in their last three games is a worrisome trend that needs to be fixed soon. Otherwise, a very good season could very well evaporate before the playoffs even begin.

The Portland vs Seattle derby, always a delight, had huge playoff implications. The Sounders defeated Portland 2-1 on Friday night at Providence Park. While Seattle grabbed the Cascadia Cup, this is a side that needs to keep winning in order to stay in the playoff hunt against the likes of Minnesota and Real Salt Lake.

With no room for error in the very competitive Western Conference, Seattle needs more heroic performances from the likes of Jordan Morris, who has been very good as a winger when needed, and midfielder Gustav Svensson. The Swede's gritty play, a trait often overlooked, helped Seattle stop the Portland attack from creating plays. It was the kind of performance that can lead to lifting an MLS Cup.