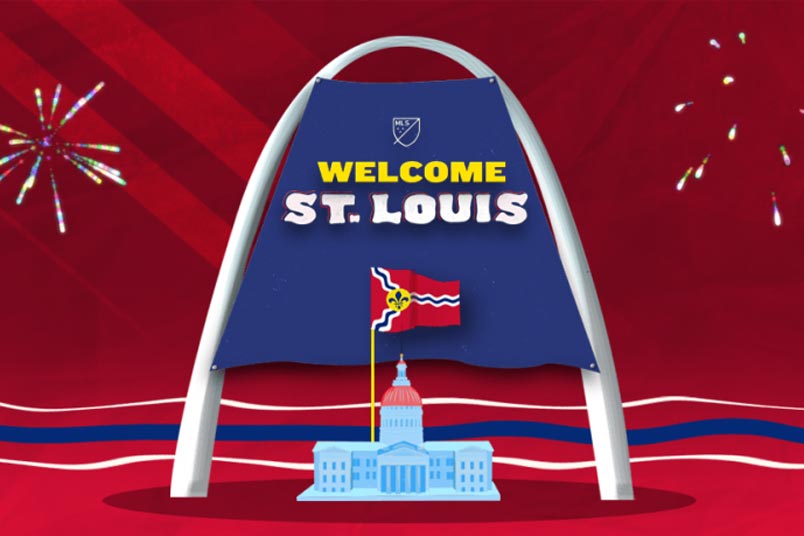 By Jason Davis – WASHINGTON, DC (Aug 21, 2019) US Soccer Players – Don Garber’s whistle-stop expansion tour was in St Louis on Tuesday. The MLS commissioner announced that the city will be home to the newest addition to the ever-growing list of teams. If you’re counting at home, this is lucky number 28. The as-yet-unnamed club begins play in 2022. That launch date that gives the ownership in St Louis plenty of time to work out the final details of its stadium plan and construct a 22,500-seat venue in the Downtown West portion of the city.

St Louis will be, per the league, the first “female majority-owned team in MLS”. Carolyn Kindle-Betz and six other female members of the Taylor family, the founding family of Enterprise rental cars, lead the bid. The Taylor family is a St Louis institution and wealthy enough to front a team that will run close to half-a-billion dollars in start-up costs.

Kindle-Betz doesn’t know much about soccer, or didn’t before the chance to invest in an MLS expansion team came along. The soccer savvy in the St Louis ownership group comes from Jim Kavanaugh. Kavanaugh is a St Louis native, the CEO of St Louis-based World Wide Technology, and a former professional player. He’s also in charge of St Louis’s current professional soccer entry, St Louis FC of the USL Championship.

St Louis makes sense as the home of a topflight club. It’s the city that was home to numerous members of the 1950 United States team that shocked England at the World Cup in Brazil. It’s the city that birthed the award for college soccer’s best player, the MAC Hermann Trophy. It’s the city that counts a slew of professional players among its sons and daughters, including Taylor Twellman, Steve Ralston, Becky Sauerbrunn, Tim Ream, and Josh Sargent.

It might be the city where soccer is most central to the annual rhythms of youth and scholastic sports. Both Portland and Kansas City have claimed the crown of “Soccer City, USA” in the past. The Timbers even included it in the design of the seats in the recent Providence Park expansion. St Louis has as good a claim as any to that title.

Earning a place in that fight might turn on the success of the MLS expansion franchise. The Taylor family’s involvement and a stadium plan that requires no outside public subsidies pushed St Louis back to the top of the list of candidates when they launched their bid in October of 2018.

A previous bid that included Kavanaugh but not Kindle-Betz and the Taylor Family failed to push through a stadium proposal that required a public referendum on a tax to fund $60 million in stadium costs. At that point, St Louis’s chances to get into MLS look dead in the water. No matter how much it made sense to expand to St Louis, a bid without a clear stadium plan was a bid without a future.

The silver lining of the first bid’s failure is that it prompted the Taylor Family to get involved. Now St Louis has a stadium plan without a major weak point along with a local ownership group committed to making MLS work in their hometown. Recent history tells us that local ownership is a huge advantage. When the going gets tough, absentee owners often lack the interest to turn things around.

St Louis has all the makings of another MLS expansion success story. Provided the stadium plan gets a green light and construction starts on time, the new club should open at a purpose-built 22,500-seat venue with views of the city’s downtown and famous arch monument. Enthusiasm for the club is high. As long as the branding and build-up work, St Louis will play to full stadiums and gain real interest from a populace more receptive to the sport than most.

The formula in St Louis goes beyond the city’s soccer history. The lack of a National Football League team thanks to the relocation of the Rams to Los Angeles means there is more media room for a soccer club and more corporate dollars available than in major markets with a pro football team. MLS doesn’t necessarily follow a formula when it comes to expansion choices, but the lack of an NFL team in town belongs on a general list of positives.

St Louis’s official welcome to the MLS family leaves two open spots until the league hits the most recently announced planned total of 30 teams. Garber previously stated that St Louis and Sacramento were the only two cities currently in the running, which leaves backers of the bid in the California capital holding their breath. Sacramento’s eventual entry was long thought to be a foregone conclusion. After so many years of waiting for the call, it doesn’t seem certain any longer.

Sacramento has big money attached in billionaire Ron Burkle, but he’s not local. St Louis’s group understands local politics and has the business connections to make their launch successful as Nashville SC is doing with the Ingram family. Sacramento will likely have an absentee owner relying on others to be the face of the franchise.

In Miami, the Mas family has that local connection and now a local problem. Monday’s news that the golf course site where Inter Miami is pushing to build its permanent home is more toxic than expected sent shock waves through the sporting and political interests of South Florida. The price tag for remediation of the site will grow, perhaps as high as $50 million. With Inter Miami setting up shop in Fort Lauderdale while the process plays out in Miami, the natural conclusion is that “Inter Miami” might not play in their city for a long time.

It’s possible that the bigger price tag to clean up the Melreese site could play into Inter Miami’s hands. The city won’t likely be picking up the tab. As long as the Mas brothers are happy to eat the cost, the toxicity of the soil there could push the land into the club’s hands.

Ahead of a self-imposed deadline to deliver a lease proposal to the city commission for a vote, the conventional wisdom is that Inter is one vote short of passage. Ambition, deep pockets, and the dream of building an audacious complex called “Miami Freedom Park” no matter the price tag might be enough to turn a commissioner and get Miami where St. Louis appears to be. An MLS club in possession of a strong stadium plan and primed to meet the high bar for expansion success.