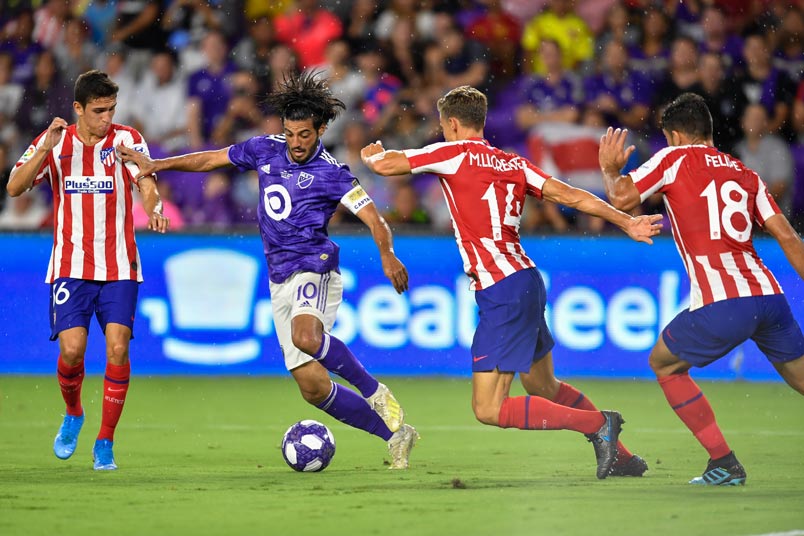 By Charles Boehm – WASHINGTON, DC (Aug 2, 2019) US Soccer Players – More money, new problems. That’s one succinct way to encapsulate Major League Soccer’s situation as it celebrated the 2019 All-Star Game in central Florida this week. With more teams, stars, revenue, and investment coming on board than ever before, MLS finally has some compelling things to celebrate and stories to tell. The league’s midsummer spectacle is one of the main vehicles for doing both.

What was once and in some ways still is a made-for-TV event engineered to lure the attention of a soccer-suspicious mainstream media has evolved into something like a family reunion wrapped around an exhibition match. The league has come to use this spot on the calendar as both a party for its fans and partners and a signpost of how far it’s come and where it’s going.

The intentionality of that investment in the event has made it an important gathering for the North American soccer industry regardless of what happens in the game itself. In that regard Orlando 2019 did not disappoint, particularly in terms of access to players, Don Garber’s media availability after the board of governors meeting and the general gossip buzz around the hotel lobbies. Here’s a few of the week’s leading topics.

What was once a mandate for survival has now become something closer to a bonus for additional profit and reach. The expansion fee has apparently climbed to a dizzying $200 million. Add to that a stadium, training facility, and the like. Garber made clear that upwards of a half-billion bucks in spending right off the bat is not just a wish, but a directive from the league to its newest members.

On Wednesday he provided updates on the Austin, Miami, and Nashville franchises coming over the next two years. Garber also batted around a number of coy statements about expansion slots 28 and 29. Sacramento and St Louis have long been the frontrunners for those bids. The full-court press recently laid down by Carolina Panthers owner David Tepper seems to have vaulted Charlotte into the conversation ahead of the expected schedule, however.

It’s no longer the situation when expansion is a necessity. MLS execs seem confident about waiting until every last I is dotted and T crossed.

“Both of those teams [28 and 29] are looking at coming in in 2022, so we’ve got plenty of time for them to get their projects finalized,” said Garber. “Remember, this is the longest period of time that we would ever have had if we reached agreement and finalized a deal today with any expansion team. So we’re getting more experience collectively, both the bidding groups and the league, with getting these deals done with many many years to go. But there is no rush.”

It was fascinating to compare the diversity of backgrounds and experiences across this year’s All-Star roster. On the one hand, you had megastars like Zlatan Ibrahimovic and Wayne Rooney, who bring world-class skillsets and global fanbases to a league very much in need of both. On the other, long-serving domestic veterans like Nick Rimando and Chris Wondolowski provided a reminder of MLS’s past, and the roots of an organization founded with the American player in mind a quarter-century ago.

Rimando’s first All-Star experience came way back in 2001. That was before Designated Players and Homegrowns and TAM, in a time when even the idea of soccer-specific stadiums was in its infancy. While he acknowledged that the rising quality brought on by the league’s internationalization was obvious and important, the Real Salt Lake goalkeeper noted the steady decline of US players’ involvement in the All-Star Game as a result. Perhaps no surprise, then, that he advocated for the return of the East vs. West format in place of the visiting superclub that replaced it.

Meanwhile, Ibrahimovic and Rooney underlined their larger-than-life status by skipping the two All-Star training sessions on Monday and Tuesday. Both arrived just in time to do a quick gaggle with reporters at Exploria Stadium on Tuesday. They still featured in the starting XI vs Atletico Madrid on Wednesday night. Who in MLS is in any position, much less desire, to tell them otherwise?

Zlatan’s MLS legacy is already shaping up to be a complicated one. In past weeks the charismatic Swede has dubbed himself a Ferrari among Fiats in this league. He’s gone out of his way to talk himself up, and talk the league down, to an extent that would’ve impressed Muhammed Ali. He continues to walk the walk on the pitch. It’s possible that his blunt observations about MLS’s limitations could prompt introspection among Garber and his executives in a way that other critiques have not.

This is the side effect of more spending and ambition when it comes to MLS talent. Real stars from overseas can raise the level of play and cultivate a rare sort of allure. They also force league leaders to cope with luxury-class challenges. That includes managing egos and accepting criticism along with getting comfortable with a certain type of behavior quite different from no-nonsense vets like Wondo.

The MLS Players Association was also in Orlando this week. The union laid out their perspectives and priorities in a Wednesday media session as the current collective-bargaining agreement ticks down to its expiration at year’s end.

Both sides took a positive, conciliatory tone in their public utterances. Yet there are real, knotty issues facing those at the bargaining table. The union desires to lift MLS’s persistently low minimum salary and open up wider free agency, freedom of movement, and wage competitiveness. They’ve registered increasingly urgent concerns about the strict limits on charter flights that have led to several travel nightmares for teams on road trips this season.

The MLS players have never gone on strike. With more and more money flowing into the league and relatively little of it trickling down beyond the DP megastars, their collective patience may be approaching its limits.

“A strike is never the goal, and it’s not our goal,” MLSPA director Bob Foose said, while noting that preparations for a possible work stoppage are underway. “If we each come to the table and work hard to find common ground, I’m very confident we can reach an agreement that will benefit both the player pool and the league. That’s my hope and the hope of all the players. If it doesn’t happen, at that point the player pool will be making a decision as to whether or not they’re willing to play with the terms that are on the table.”

Somewhat encouragingly, the league this week announced its new MLS Greats Network, an initiative to provide a range of support for former players, from mental health to career development and beyond.

“[It’s] our commitment to support any player that’s ever signed an MLS contract,” said Garber. “And one of the outcomes of a commitment that I made personally and our owners made, is that we wanted to start engaging more closely with ex-players and provide them opportunities to work for our clubs, to be involved in media, to basically have a life after being an MLS player.”